Never on our side

This article is over 18 years, 9 months old
MANY PEOPLE have been shocked and outraged that it is a Labour government which has cravenly supported George Bush and launched a bloody attack against Iraq. Throughout its history, many ordinary members of the Labour Party have been committed to peace. But at every key moment the party leadership has supported imperialism and war.
Downloading PDF. Please wait...
Saturday 29 March 2003

MANY PEOPLE have been shocked and outraged that it is a Labour government which has cravenly supported George Bush and launched a bloody attack against Iraq. Throughout its history, many ordinary members of the Labour Party have been committed to peace. But at every key moment the party leadership has supported imperialism and war.

Labour’s first test came with the First World War. At a rally two days before the start of the war, Labour produced a manifesto which included the slogan, ‘Down with war! Up with the peaceful rule of the people!’

But when war began, Labour repudiated the manifesto. Labour leaders went on to urge workers from Britain to slaughter workers from Germany in the hell of trenches. At the end of the war Liberal prime minister Lloyd George commented, ‘Had Labour been hostile, the war could not have been carried on effectively.’

Labour passed a resolution against colonialism in general, but then made an exception for ‘The Colonies of Tropical Africa’. It said it was ‘impracticable to leave the various peoples concerned to settle their own fates’. The Labour governments of 1924 and 1929 continued to support the repression of the colonies in the British Empire.

JH Thomas was the colonial secretary in the 1924 Labour government. He said his government ‘intended above all else to hand to their successors one thing when they gave up the seals of office, and that was the general recognition of the fact that they were proud of, and were prepared to maintain the empire’.

The Meerut trial summed up Labour’s commitment to the empire. Labour leader Ramsay MacDonald presided over vicious repression of people who had tried to organise trade unions in India. Three British citizens and 20 Indians were sentenced to the horrors of transportation in the Andaman Islands or to hard labour.

The most savage sentence of all, transportation for life, was given to Muzaffar Ahmed, vice-president of the All-India Trade Union Congress.

The Attlee government, elected by a landslide at the end of the Second World War, is hailed as the highpoint of Labour’s achievements. But foreign secretary Ernest Bevin declared, ‘British foreign policy will not be altered in any way under the Labour government.’

Labour’s deputy leader Herbert Morrison said that to give African colonies independence would be ‘like giving a child of ten a latch-key, a bank account and a shotgun’.

Labour tried to prevent the marriage of Ruth Williams, a white woman, and Seretse Khama, who was soon to be leader of Bechuanaland (Botswana). The apartheid South African government was outraged at the idea of a ‘mixed race marriage at the heart of the empire’, and Labour agreed.

The Attlee government continued to try to hold on to India until even its military advisers told them that this was impossible. And the settlement the Labour government presided over saw the partition of India into two states, which led to a bloodbath. The government helped crush risings in Greece, Malaya and elsewhere.

Mossadeq became leader of Iran and nationalised the oil industry. The Labour government imposed sanctions and closed down all of Iran’s bank accounts. When ships tried to move Iranian oil they were forced back by RAF planes. This set the stage for Operation Ajax where British and US agents conspired to remove Mossadeq in 1953.

At the start of the Suez crisis Labour leaders waved the Union Jack after the Egyptian leader Nasser nationalised the Suez Canal. In the same way Labour figures today denounce Saddam Hussein, Labour leader Hugh Gaitskell said, ‘It is exactly the same as that we encountered from Mussolini and Hitler in those years before the war. Force is justified in certain events.’ Labour was eventually forced to come out against war by pressure from below.

Mass opposition meant that Harold Wilson’s Labour government (and the succeeding Tory government) did not send troops to back the US in Vietnam. Nevertheless Wilson remained one of the most loyal supporters of the US’s war.

Under Labour Britain held on to territories ‘East of Suez’ such as Aden, Qatar and Bahrain. British troops were also sent to prop up the slave-owning Sultan of Oman.

Labour played a key role in allowing the Tories to unleash their forces during Margaret Thatcher’s war in the Falklands in 1982. Despite its left wing leader Michael Foot describing himself as a ‘peacemonger’, Labour cleared the way for the slaughter.

Foot urged the government ‘to prove by deeds’ that the Falklands had not been betrayed. He received full praise from the Tories. Edward du Cann MP said, ‘The leader of the opposition spoke for us all. He did the nation a service.’ The biggest anti-war vote saw just 22 Labour MPs rebel. Foot completed his responsibility for the Falklands adventure by offering Thatcher ‘congratulations’ after the Argentinian surrender.

Labour’s leaders pulled behind the Tories and backed the slaughter of the 1991 Gulf War. Labour leader Neil Kinnock echoed George Bush Senior’s most chilling rhetoric. And in a parliamentary debate before the war, he rescued a bumbling John Major by speaking passionately in favour of war. 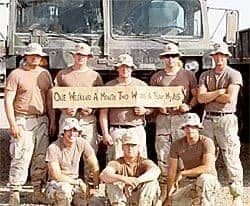 US troops refusing to fight in Iraq and Afghanistan 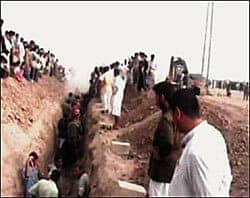