This article is over 14 years, 8 months old
Behind the recent wave of scare stories about migrant workers and ‘health tourists’ is a campaign to find scapegoats for the problems created by New Labour. The facts don’t add up, writes Yuri Prasad
Downloading PDF. Please wait...
Tuesday 22 May 2007

Many people were shocked when Margaret Hodge, the New Labour minister and MP for Barking in east London, called this week for “indigenous” families to be given priority over “new migrants” when it comes to allocating council housing.

Hodge’s inflammatory comments were swiftly condemned by anti-racists, and attacked by some of her colleagues in the Labour Party, such as Jon Cruddas, MP for neighbouring Dagenham.

But Hodge’s tactic of heaping the blame for housing shortages on immigrants is not an isolated aberration.

There has been an alarming trend in recent months of New Labour ministers pandering to and endorsing racist scare stories spread by the right wing press.

Last month the immigration minister Liam Byrne said the arrival of migrant workers in Britain had “deeply unsettled the country”. He promised a “tough” points-based immigration system to control the flow of immigration.

This is not a coincidence. The anger against the government over the war is increasingly being compounded by frustration over a whole range of social issues such as NHS cuts, housing shortages and low pay.

Rather than reverse the neoliberal policies at the heart of these problems, ministers choose to stoke up the myth that immigrants are to blame for making Britain a worse place to live.

But is it really the case that immigrants are putting massive pressure on services such as the NHS, driving up the cost of housing and undercutting the wages of low paid “British” workers?

In fact the vast majority of newspaper stories cited as evidence against immigrants are ridiculous and easily demolished.

The story rested on the fact that in Bradford, West Yorkshire, four new schools are being built to cope with an expected increase in the number of ­primary aged children.

But a minimal investigation reveals that Bradford has the second highest birth rate of any part of Britain outside London.

Moreover, the projected increase in the number of school aged children is the result of “home grown” births, and has nothing to do with immigration.

The Standard article also features Wrexham in North Wales, where we are told there is a “crisis” in the city’s schools caused by the arrival of Polish children.

This “influx” turns out to be 50 pupils – averaging at one child per school across the city. And the Standard article does not say that the number of school aged children in the city has declined by 500 in the last five years.

A similar argument is at work over healthcare – and it is no less disingenuous.

There is a financial crisis in the NHS that is having an effect on both patient care and those who work in the service. But the government is desperate to deflect blame away from itself over this.

A host of newspaper articles have come to its aid with stories of “heath tourists” arriving to Britain to seek free medical treatment, or of NHS jobs being taken by “foreign nurses”.

The Mail on Sunday ran a front page headline that read “Widow, 88, Told by GP: Make Way for Asylum Seekers”. It will never tell its readers that 770 qualified doctors in Britain came to the country as refugees.

Neither will it tell them that the majority of immigrants to Britain pay more in taxes than they take out in benefits and services.

Much of this is due to the age profile of immigrants. Around three quarters of those who have come to Britain from Poland, for example, are aged between 18 and 34. They are the most likely to be working and least likely to be using services such as healthcare and education.

The notion that foreign nurses are taking British jobs is similarly mythical. Anyone who has been in hospital recently will tell you how understaffed hospitals are.

This is because of severe cutbacks across the country, which means up to 80 percent of recent trainee nurses in Britain are unable to find work.

The government’s response to this situation was to tell nurses from overseas to expect that their contracts would not be renewed in the future. But this knee-jerk reaction will just damage the NHS further.

The Royal College of Nursing notes that the expected retirement of 180,000 nurses over the next ten years will create a crisis in recruitment that is impossible to solve without overseas nurses.

“[Overseas nurses] are not newly qualified,” it reports. “On average they have 14 years of experience and specialist skills. It is unrealistic to assume that newly qualified home grown nurses will be able to fulfil those kinds of roles.”

The government and its friends are also quick to blame immigration for a decline in living standards for workers.

Earlier this year Lord Turner, a former head of the bosses’ CBI organisation, warned Tony Blair that migrants were pushing down wages of those at the lower end of the scale, because they were willing to work unlawfully for below the minimum wage.

Like others who have made similar claims, Lord Turner provided no evidence to back this statement.

Nevertheless it is true that bosses, particularly those in the hotel, cleaning, catering and construction industries, are always looking for ways to use unregulated workers (of whatever origin) to reduce costs.

Employers will always try paying as little as possible, including refusing to pay the minimum wage – particularly to those who are without work permits.

There are a number of potential answers to this problem, but blaming immigrants is not one of them. For a start the ­government could grant an amnesty to all those who are working in Britain without proper documentation.

Workers who are not scared of being deported are more likely to fight back against bullying bosses.

The government could also raise the minimum wage and pass laws that would severely punish employers who paying less than the minimum. It is also imperative for trade unions to act quickly and organise migrant workers.

This would help integrate them into the organised working class, just like generations of migrants in the past.

Underlying our rulers’ myths is the fact that capitalism has contradictory instincts when it comes to immigration.

The ruling class needs migrant labour to fill the low paid and insecure jobs that increasingly characterise neoliberal Britain. But it doesn’t want to take on any costs associated with those workers.

So migrants are allowed into the country in order to earn a pittance – but there is also a drive to bar them from access to healthcare, housing, education and other publicly funded services.

More fundamentally, the ruling class knows that it has to divide the labour force on national, racial and ethnic lines if it is going to keep wages down.

A divided working class competes against itself, seeing its different component parts as threats and enemies. It is therefore less likely to form the effective collective organisation necessary to defend its living standards and conditions from attack by the bosses.

As politicians and commentators egg each other on in their game of divide and conquer, socialists need to ensure that workers know who their real enemies are. 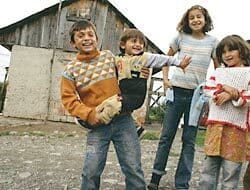 Roma: blaming the victims in Slough