No defence for the British empire

This article is over 15 years, 7 months old
Niall Ferguson presented the first episode of his television series The War of the World this week. His apology for imperialism must be robustly challenged, writes Neil Davidson
Downloading PDF. Please wait...
Saturday 24 June 2006

Historian Niall Ferguson is perhaps the best known of the new generation of media dons. Where his nearest rival, Simon Schama, exudes a vague left liberalism and is apologetic over the British empire, Ferguson is ferociously and unashamedly neo-conservative.

A right wing perspective does not, of course, automatically preclude historical value.

But in his most recent work any insights have been submerged into an ideologically driven agenda which, if he were a Marxist, would lead to his books being dismissed out of hand rather than applauded.

Empire (2002) argues that the British empire was a force for good in the world, despite what he describes as unfortunate omissions and unintended consequences. Colossus (2004) argues that the US should consciously take up the imperial baton, even at the cost of doing away with what remains of its social security system.

Now The War of the World (2006) claims that one reason for the 20th century being the most murderous in history is not – as Marxists have argued – because of inter-imperialist wars, but because of the disintegration of these empires.

Channel 4 has obligingly provided him with a TV series to publicise each of his books.

His ideas have been gratefully adopted by the political representatives of the Anglo-American ruling class. In January last year Gordon Brown declared, at a press conference in Tanzania of all places, that “the days of Britain having to apologise for its colonial history are over. We should celebrate much of our past rather than apologise for it.”

Although expressed in the pious verbiage of which Brown is a master, the theme is pure Ferguson – a point which those deluded souls who think that a Brown-led Labour Party will move to the left might do well to ponder.

Ferguson’s ideas therefore need to be challenged, particularly at the moment, when every conceivable argument will be marshalled to justify an attack on Iran. But how?

We should obviously highlight his unsustainable claims. For example, Ferguson claims that Britain was unique among empires in encouraging democratic government in the colonies.

Why then – with the one exception of India – are the most democratic and economically developed ex-colonies to be found, not in the once-British areas of Africa and Asia, but in the territories ruled by the more backward states of Spain and Portugal in Latin America?

There are similar problems with his claims for the economic benefits of empire for its subjects. Ferguson argues that investment flowed from the metropolitan centres to the colonies. In fact, most British investment flowed to other advanced countries, to white settler dominions like Australia or to semi-dependencies like Argentina.

Rather than contributing to capitalist development, in many areas the British consciously acted to reinforce – or even introduce – feudal social relations in order to maintain their control. Iraq in the 1920s is only the most obvious example of this manoeuvre.

Finally, there is the issue on which Ferguson lays so much emphasis in his new book – ethnic divisions. “The peak of violent death (as opposed to death by starvation) in modern India was of course in 1947, as the British withdrew and Hindu and Muslims slaughtered one another,” Ferguson writes.

Some tribal and religious divisions existed before British rule. But the British quite consciously pursued a policy of divide and rule by making these worse – often by giving privileges to one group within colonial society.

In other areas, the British either introduced (Ireland) or encouraged (Palestine) ethnically distinct colonial-settler groups to act as spearheads for imperial rule.

In this respect, the US today is following in British footsteps, as it seeks to control Iraq through enforcing divisions between Sunni, Shia, Kurd and Turkoman. These divisions have historically had virtually no political significance for the inhabitants of that ravaged country.

Ferguson’s easy acceptance of ethnic divisions can be traced back to attitudes to “race”. He seems to be one of the few people outside the openly fascist right who is prepared to use the term without quotation marks. Ferguson writes, “Human beings do seem predisposed to trust members of their own race as traditionally defined.”

In a debate with the Independent columnist Johann Hari, Ferguson has argued that there is a big difference between the horrors of empire and the crimes of Hitler and the Nazis.

According to Ferguson, the British in India, for example, merely displayed “incompetence, negligence and indifference”. The key for Ferguson is intentionality – Hitler meant to kill Jewish people while the British Lords Lytton and Curzon did not intend to kill Indian peasants.

The first thing to say here is that Hitler himself saw a number of connections between the British empire and the “Thousand Year Reich”, a fact which has been brought to our attention in the writings of – Niall Ferguson!

“Adolf Hitler repeatedly expressed his admiration for British imperialism. ‘The wealth of Great Britain’, Hitler declared, ‘is the result… of the capitalist exploitation of the 350 million Indian slaves.’ That was precisely what Hitler most admired – the effective oppression of an inferior race.”

Does Ferguson think that Hitler was correct in this assessment? He tactfully avoids telling us.

Against Ferguson’s attempt to absolve the British empire from blame, it is necessary to point out that droughts did not tend to turn into famines under the Mughal Empire, nor under the post-colonial Indian state. They did under late British rule because the empire had destroyed the economic system which had previously sustained the peasantry. It then subjected them to the rigours of free market capitalism which rejected any serious attempt to “relieve” the starving.

The British rulers of India could have done more, but the real guilt lies with the economic system which they oversaw, and whose effects were not restricted to India. Exactly the same catastrophe had occurred in Ireland during the 1840s, when over a million more victims were offered up to the gods of economic orthodoxy.

This points to another way in which we must go beyond simply a liberal critique of Ferguson. Opposing the excesses of empire, or even the empire as a whole, without also opposing British capitalism, implies that the latter could have evolved without any exploitation of the less developed world.

Because Ferguson sees nothing beyond capitalism, he has to justify the imperial system on which it rested. And in doing so he can always defeat his liberal critics by asking what their alternative would have been.

We look at history through the eyes of the oppressed and exploited, whose experience Ferguson completely ignores. To read Ferguson, you would think that the British empire came to an end simply because of financial exhaustion after the Second World War. The revolt of the colonial peoples is passed over in virtual silence. I think that one reason for this is connected with contemporary politics.

In Colossus, Ferguson writes, “I believe the world needs an effective liberal empire and that the United States is the best candidate for the job. Economic globalisation is working but needs to be underwritten politically, as it was a century ago.”

In fact, there is virtually no chance of the US realising Ferguson’s dream of a new colonial empire. There are internal reasons for this in the economic inability of the US to maintain such an empire. But it is also the case that no people will now accept foreign domination in the way that pre-capitalist societies were forced to. If nothing else, surely Iraq demonstrates this.

Ferguson shows us what our rulers would like to do, if they were unconstrained by economic reality or popular resistance. But the impossibility of restoring a colonial empire should not blind us to the destruction our rulers will unleash as an alternative.

Neil Davidson is chair of Livingston branch of the Scottish Socialist Party and secretary of Edinburgh Central branch of the PCS union. He is the author of The Origins of Scottish Nationhood (2000) and Discovering the Scottish Revolution (2003). 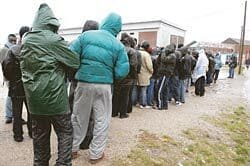 'Our generation finds its voice' 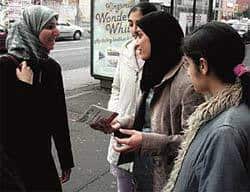 Media’s myth of the Muslim monolith