This article is over 11 years, 10 months old
Bob Holman spoke to Socialist Worker about his new biography of Keir Hardie, a key figure in the formation of the Labour party.
Downloading PDF. Please wait...
Tuesday 23 March 2010

What did Keir Hardie represent within the early Labour Party?

If you compare what Hardie stood for and what the Labour Party stands for today, the party today comes out poorly. I’m not even sure that Hardie would be allowed in it now.

Hardie put the interests of working class people first. He started work at the age of eight and worked in the mines from the age of ten. He became a union leader when the bosses pushed him out of the mines.

There was no party for labour then. The unions were tied to the Liberal Party—which, for example, was against the eight-hour day because it was an affront to the free market.

During the 1870s and 1880s Hardie came into conflict with the trade union bureaucracy, even though he was a trade union leader.

He was one of the voices, but not the only one, demanding that there had to be independent working class political representation.

What was Hardie’s role in the direction of the Labour Party?

In the upsurge of working class struggle before the First World War, Hardie was the only prominent Labour leader who backed the strikes. He argued the only thing the working class could do was to strike.

Ramsay MacDonald, Philip Snowden and even Arthur Henderson—a trade union man—saw the strikes as dangerous. They believed you won votes by being moderate.

But for the last two years of Hardie’s life, he and MacDonald were reconciled and campaigned against the First World War together.

After Hardie’s death in 1915 MacDonald and Snowden took the party in the direction they wanted and won power.

Hardie had proved in practice that radical politics can win elections. He never lost, or came close to losing, his seat in Merthyr Tydfil.

In 1892, when he was first elected, Hardie became known as the “minister for unemployment”.

His radicalism would mean that, for instance, his views on royalty would stop Labour selecting him for a seat today. A mining accident in Wales killed some 250 workers the same day as a royal had a son. The parliamentary debate was about the birth. Hardie couldn’t stand it and made a passionate speech attacking the royal family.

Can you think of a MP today who would constantly attack the royal family?

This is what we need to learn from Hardie today—you need to stick by your principles.

So you would argue that we need a return to “Hardiesm”?

Hardie built the party from nothing at a time when both major parties were right wing and wanted a free market.

The credit for the creation of the welfare state often goes to the Liberals around Lloyd George. But it should go to Hardie—he argued for sick pay, care for the elderly and a health service.

He saw the welfare state as a means of redistributing wealth to help bring about equality.

We need to get back to what Hardie was talking about and for that you need working class people who understand poverty.

That’s why I stay in the Labour Party, and have for 47 years. I’ve been in it longer than either Blair and Brown.

Hardie’s stress on the need for working class representation is still important.

When he stood in Scotland, his manifesto ended with the words, “I ask you to return to parliament a man such as yourselves. Who being poor, can feel for the poor.”

He refused to speak at a debate at Oxford university saying, “The audience will know so little of the common people as if they didn’t exist.”

In contrast, a recent report on the make up of MPs shows that one in four MPs went to Oxford.

If you take someone like David Miliband, it is clear he has no understanding of working class life.

We need a lot more working class MPs before we can return to having the sort of representation Hardie wanted. And that will take a long time. 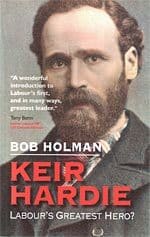