There’s a war brewing in south London. On the one side stands Mark Silverman—principal and self-proclaimed “chief executive” of Lambeth College. On the other stand Lambeth College workers who are on all-out strike—and the thousands of trade unionists across Britain who back them.

Silverman has brought in new contracts at the college. They slash holidays, cut sick pay and bring in some of the longest working hours in any further education college in Britain. The attack is part of a bigger assault on further education. Some 2,000 jobs are under threat at 50 colleges in the latest wave of cuts alone.

Lambeth College sites, at Brixton, Clapham and Vauxhall, are in poor areas of London. For many people—from unemployed workers to people with learning difficulties or disabilities to migrants—the college is a lifeline.

Ann teaches English for Speakers of Other Languages (Esol) at the Brixton site. She told Socialist Worker, “It’s amazing the number of people who have slipped through the net in terms of education.

“We have adults coming here who can’t read or who never learned to write. It’s shocking. Some people have been in prison. A lot of people don’t have a network of family or friends to rely on. Coming here and getting out is important for them.”

Frank runs the canteen at the Brixton site and teaches cookery. Frank explained bosses attacks make it harder to teach students with disabilities.

“You don’t just teach them for a year and then that’s it,” he told Socialist Worker. “It’s an ongoing process. It can take years and it isn’t just about education—it’s about developing social skills and confidence too.”

One parent has an autistic son who works in the canteen with Frank. He has been at the college either studying or volunteering since he was 19 years old—he’s now 30. She told Socialist Worker, “For people with learning difficulties, education doesn’t stop at age 25. If he didn’t come here he’d be following me round shopping or sat at home.”

Workers fear the cuts will hit many of the courses some of the most vulnerable people rely on. Many say the attacks are part of a drive to privatise the college and bring in a more business-like culture.

Silverman has denounced strikers as “indulgent” and accused them of damaging “the education opportunities of our young people and adults in Lambeth College”. But it’s workers and union members who have fought to defend education and students from the bosses’ attacks. 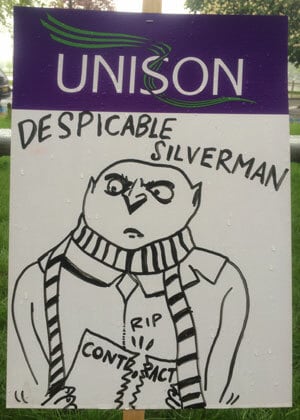 Jane, a striker at Vauxhall, said the principal doesn’t have a great reputation among students. “One student said they didn’t know who Silverman was,” she told Socialist Worker. “So I showed them a picture. They said, ‘Oh, I know him. He ignores me when I pass him in the corridor’.”

Mario works at the Brixton site. “The principal says he’s here for the long term and is committed to the future of the college,” he said. “But he recently applied for another job!”

Vauxhall striker Brian said the college boss seemed to be “deliberately running things down”. “He’s trying to run the place like a business,” he said. “But it’s not a business. It’s a college.”

Frank agreed. He described how a few years ago the Ofsted inspectorate gave his department a grade 1—the highest grade possible. “We were very highly motivated and were being creative in our teaching,” he said.

“When Silverman came he said the grade was not right. He said the college had been going downhill for years. He said we had to ‘modernise’.”

Strikers say that forcing them to take on more work means they have less time to spend helping students.

Marina works in the science department at the Clapham site. She told Socialist Worker, “The library here moved to a smaller space. In the process, we lost 5,000 books. Now we’ve been told we have to get rid of a further 10-20 percent of the books. “Bosses don’t think students need books because they think everything can be done online. The new library is more like an internet cafe.”

Workers have been told that the new contracts are necessary because the college is in financial difficulty. Silverman threatened, “If our financial position cannot be improved, the college could be forced to close”.

Marina said bosses have poured money into a restaurant and spa at the Clapham site—apparently complete with a jacuzzi. “There was a lot of fuss made about how great this would be for everybody,” she said. “Then it went quiet.

“And the restaurant is only open three days at week at lunchtime. Only the principal and his cronies go there.”

Marina said the college needs money to be spent elsewhere. “They’ve cut back on cleaners,” she said. “Blinds are falling off the windows. A lot of the college is falling apart.”

After living under the yoke of management’s regime the strike—and the support that flooded in for it—was liberating.

Appointments for strikers to speak at union meetings across Britain quickly mounted up. Groups of strikers have gone to Manchester, Perth, Portsmouth, Sheffield, Edinburgh, Leeds, Oxford and across London to speak to other workers about their dispute and appeal for solidarity.

Striker Julia had joined a team that visited workers at London’s City and Islington College last week. They collected £310 from just two campuses. “They are so supportive of us,” she told Socialist Worker.

“It’s very empowering actually. They know that if we fall it will be bad for further education in general.” 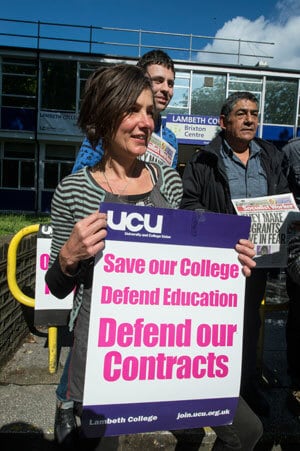 Workers quickly took the lead in organising the strike. They divided up tasks such as organising speakers for meetings, planning picket rotas, managing the phones at the strike’s Brixton headquarters and fundraising.

Simon, a striker in Clapham, told Socialist Worker, “This strike has released the energy that was always there among teachers.

“The response is remarkable when strikers go and speak at meetings. Even if people are feeling nervous they are immediately lifted because people tell them, ‘Your fight is our fight’.”

Frank said, “Before the strike I was totally demotivated. The alarm would go off at 6.30 and I’d put it on snooze—then start worrying about all the things I had to do. Now the alarm goes off at 5am and I’m straight out of bed. I’m motivated for the first time in about four years.”

Workers have joined the union throughout the dispute and since the strike began.

Pickets described receiving an email from Silverman on the first day of the strike that claimed only a minority were taking part. Unison union members in the college said he came round offering them chocolates on the second day of the strike. On the third day, he offered them a free lunch.

None of it seemed to be working.

On the second day of the all-out strike, Unison members at the college announced a two-day strike for Wednesday and Thursday of next week.

“We feel that the principal is trying to divide the unions from each other,” one Unison rep told Socialist Worker. “But we are fully behind the UCU.”

Students have also showed their support for the action.

Mandy Brown is branch secretary of Lambeth College UCU. “The strike is solid despite attempts to divide us,” she told Socialist Worker. “Workers have shown real determination to do whatever it takes to defend their conditions and education at Lambeth College.

“We need the same determination and solidarity from the rest of the UCU and the labour movement. And we hope that our struggle can be an inspiration to workers everywhere and show they can resist.”

The action in Lambeth comes at a critical time. Bosses everywhere want to turn colleges from places where people can learn into factories that focus on a narrow set of skills that benefit business.

But the strike matters outside education too. This group of workers in Lambeth are showing that it is possible to take hard-hitting action to resist the bosses.

“If they get away with this here, it will set a precedent,” said Ivan, a striker at the Vauxhall site. “But Tower Hamlets College workers had an indefinite strike a few years ago, and they won.

“If you fight you might win. So we’re fighting.”

Picket lines from 7am every day in Brixton, Clapham and Vauxhall and a mass meeting each day at 11am at the Clapham site. 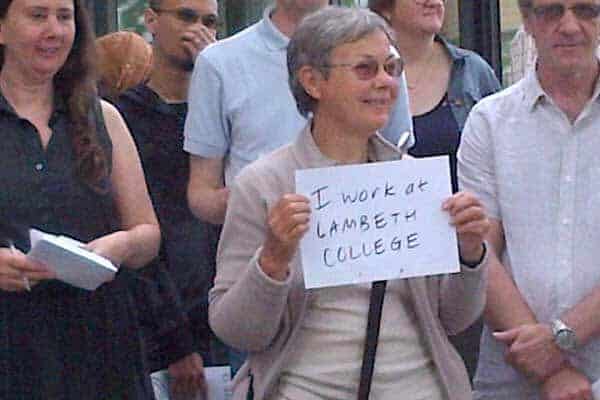