This article is over 15 years, 4 months old
Details of people traveling from around the country to demonstrate outside the Labour Party conference in Manchester. They are demanding the withdrawel of British troops from Afghanistan and Iraq and that Tony Blair should go now for taking the country
Downloading PDF. Please wait...
Saturday 23 September 2006

Hundreds of young people took part in a students’ feeder march to the Albert Square assembly point. Beginning with a couple of hundred, it grew to over 600 by the time it arrived. There were very large numbers from both Manchester University and Manchester Metropolitan University.

Elsewhere Unison union members were collecting for their strike against privatisation at NHS Logistics.

They were all united by their opposition to the war and their anger at Tony Blair.

Lisa Donoghue, a PCS civil service workers’ union member, said, “We have had enough of being ignored. There is no exit strategy in Iraq or Afghanistan, simply escalating violence.

“What can we do other than make our views known? But the days when politicians listened to ordinary people seem to be over. My heart sinks at the prospect of a Gordon Brown government. He’s a sinister character. He’s already shown he will cut services and jobs, anything to cut costs and help business.”

Clare Fisher from south London, who is soon to become a student at Oxford, said, “I’m disgusted at everything this government has done, particularly the wars. I’m here today because I agree with the main demands – no to a Trident replacement, troops out of Iraq and Afghanistan, Blair must go.

“There are no parties I would vote for. There needs to be a new party that is inspiring and different to the main ones. I can see no difference between the three main parties.

“So many things need to be changed, such as privatisation and the use of Asbos. That’s why it’s good we’re protesting at this conference.”

Ten coaches from Birmingham, four from the Black Country, two from Coventry.

Three coaches from Newcastle/ Sunderland/ Durham including 25 people from Berwick. Other protesters going by Unison train and car. Eight people from entirely new Stop the War group in Whitley Bay.

51 people on packed coach. Veteran CNDers to school students and everything in between.

One full bus including delegations from Unison Tayside health and Unison city branch. Also members of Dundee trades council, T&G and UCU. Students from three universities and colleges including a Lebanese student and a student whose father is currently on his third tour of duty in Iraq.

Delegation from Nipsa union among 46 people travelling from Belfast.

Four coaches, incuding one from the Yemeni community. Many other people making their own way by train and bus and car.

Four coaches—two from Swansea, one from Cardiff and one from Newport/Caerphilly/Blackwood.

Coach with delegations from Unison, Amicus, T&G unions and the trades council.

Reports and video of Manchester Time to Go demonstration, 23 September 2006 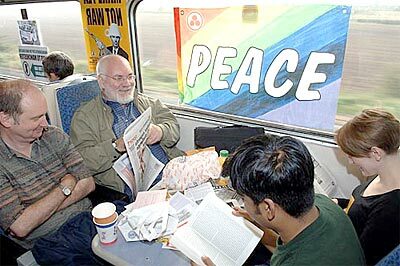 Pictures from the London peace train (1) 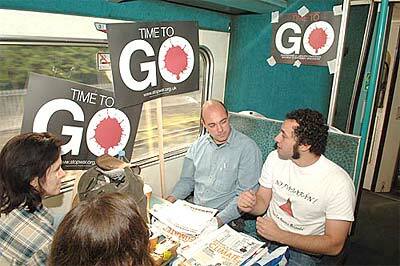 Pictures from the London peace train (2) 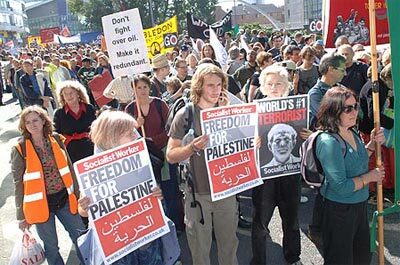 Pictures of the Time to Go march setting off 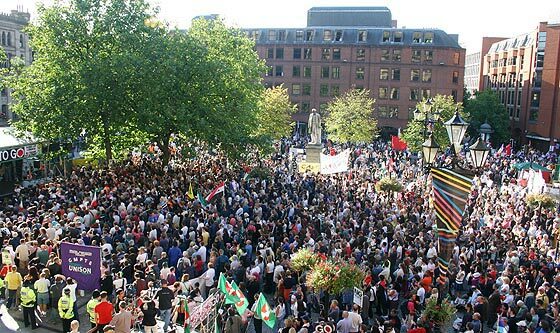 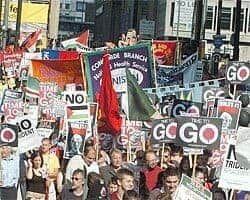 Trade unionists join the protest outside the Labour Party Conference 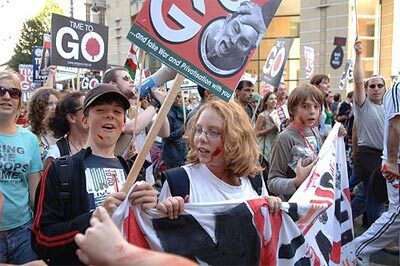 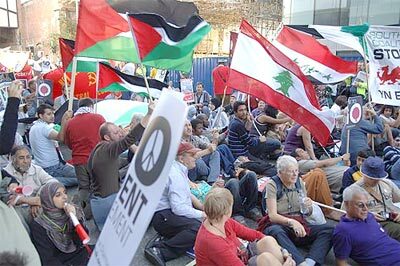 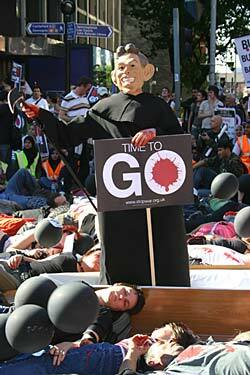 More than 50,000 protesters tell Blair it's Time to Go 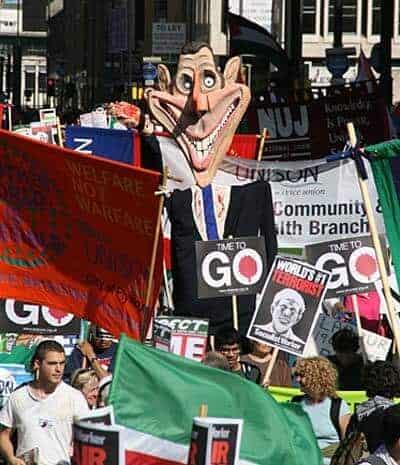 Picture: a sea of union banners

Video shorts of the Manchester demonstration

Video of Tommy Sheridan's speech at Time to Go demonstration

Video of Soumaya Ghannoushi speech at Time to Go demonstration

Video of Rose Gentle speech at Time to Go demonstration

Video of Craig Murray speech at Time to Go demonstration

Video of Lindsey German speech at Time to Go demonstration

Video of John Rees speech at Time to Go demonstration

Video of Nahella Ashraf speech at Time to Go demonstration

400 at Time for Change conference