Black people are targeted and they can see it. Things are set up for us to fail. But we’re conscious and we want change.

We have power and we need to use it. Similar things are happening here as in the US.

By providing solidarity with the US and linking together different campaigns against racism here we can build a movement to fight back.

It’s not a natural thing for people to hold racist ideas. Racism is something you’re taught.

With campaigns and protests and things like this we can teach people about racism and how to overcome it.

Capitalism tells us to think of ourselves as individuals but that’s not how it should be.

People need to understand it’s about the system.

When David Cameron passes a comment in parliament about refugees it echoes through society. We’re communicating a political stance against that.

The movement has been led by young people and although we’re young, we’re political.

The mainstream media can try and paint us as impressionable or idealistic but we’re clear we need to target the Conservatives and get their attention.

We need to think of our aims and work out the next steps to take to put the pieces together.

‘Anyone with a heart is angered’ 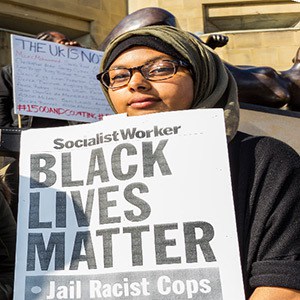 After all the riots and bloodshed in the US over the centuries, it saddens me that individuals are still at risk of losing their lives because of the reaction to the colour of their skin.

And the people committing these crimes are still getting away with it.

Regardless of their history, or the reason they’ve been approached by the police, people are being murdered in cold blood.

Since when was murder a way of restraint? When did that become a norm for the black man or woman in the US?

What’s happening over there and even over here is a monstrosity.

We need to come together as a people and that’s why I chose to protest.

I think the protests are so massive because it’s been broadcast all over the world. The world has had a glimpse of the gruesome reality of police brutality.

Everyone who has a heart has been touched and wants to support the movements as things do need to change.

It angers me and I’m sure it’s triggered anger in a lot of people.

I was marching with Black Lives Matter and going to meetings when I was still in school.

We marched every week since the failure to prosecute police officer Darren Wilson who killed Michael Brown in Ferguson, Missouri, in 2014.

We heard about the solidarity marches that happened all over the world.

Hearing that there was one in London made me excited to come here. 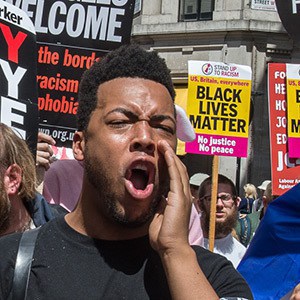 One of the huge parallels between what has been going on in the US and what’s happening in Britain is that young people are coming out and marching.

It’s really important to get organised. A lot of people putting on these marches didn’t expect the amount of people to come who showed up.

And these instances of racism aren’t only against black people. There were people on the march that had “Asians for Black Lives Matter” placards.

At the same time there’s racial discrimination against Asians so we need people to come together and fix this unjust system.

The US was built on the backs of black slaves. It’s hard to dismantle a system that has been around for centuries.

You expect US president Barack Obama to support Black Lives Matter, but he’s backed into a position where if he does he can’t actually say so.

It’s the system that’s the problem. His whole campaign was about hope but there is not much hope for black people in the US today.

The biggest victory of the movement is that people are talking about what it is to be black in the US.

‘Not a single black MP has come out to support us’

The people on these demonstrations are young, working class and new to activism.

On Tuesday of last week we marched on parliament and started chanting, “Theresa May, out!”

The debates on the protests have been wide-ranging.

Someone was arguing that we need more black-owned businesses or black people in positions of power to get rid of racism.

That can make sense to people when they see white business owners and politicians pursuing racist policies.

But not a single black MP in Britain has come out to support these protests.

Barack Obama hasn’t really done anything either. That’s even though after the killings of Michael Brown and Eric Garner in 2014 he stood up and said he’d never let anything like this happen again.

Just getting black people into high places doesn’t change anything. It’s all about the movement on the streets.

I think people are starting to get that. Many have been showing interest in socialist ideas.

The important thing for the movement is maintaining the momentum and deepening the anti-establishment feeling.

Although politics are all over the place at the moment and people are confused, clear revolutionary politics are gaining a hearing.

‘We’re on the streets to be heard’

Lots of young people are frustrated with the current system. We feel like we’re not being heard so coming out on the streets is the way to get our voices heard.

We need to continue the wave we’re on and not slow down unless we see some real change. 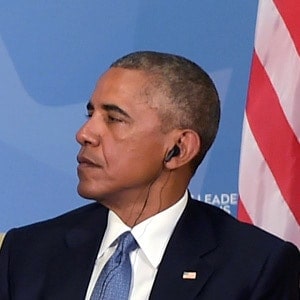 I don’t look towards politicians.

This is happening because if the politicians did actually care they would have already made a decision in parliament and we wouldn’t have to be marching.

I’m not sure what people expected from Obama. He couldn’t change the system because that’s not something that will happen through one person.

People have made a lot of excuses for him just because he’s black.

One thing that does give me hope about change being made is the new Labour leadership. The old way, Tony Blair’s way, of doing things is changing.

But you can’t expect everything to be handed to you on a plate, we still need to be the ones pushing the boundaries.

The protests have caught on because they’re part of a general picture.

The outrage about the killings of Alton Sterling and Philando Castile has come at a time when there’s a huge amount of anger in British society about racism and austerity.

In Britain black people are 35 times more likely to be stopped and searched than white people.

The European Union referendum saw a hugely racist campaign from both sides and this has given confidence to racists.

It follows the disgusting Tory campaign against Sadiq Khan in the London mayoral election, and racism directed against refugees that’s calculated to stoke up divisions.

Racism doesn’t exist in a vacuum. It’s part of a growing picture in society of isolation and alienation.

In order to maintain their rule, the powerful deliberately whip up racism.

The endemic racism in the US and in Britain is a part of capitalist society.

People on the demonstrations want a militant fight against racism and are receptive to the idea of the need to fight and defeat capitalism.

On the demonstrations on Oxford Street, people marched past buses and a lot of drivers put their fists out of the windows in a sign of support.

Organised socialists can help to widen and deepen the struggle by arguing for the need to link up with workers.

We need Black Lives Matter activists to go to workplaces—into factories, bus garages and hospitals—and argue for trade unionists to join the struggle.

If we’re going to defeat racism we need to defeat capitalism.

To do that we need to mobilise the force that makes capitalism work, the working class. 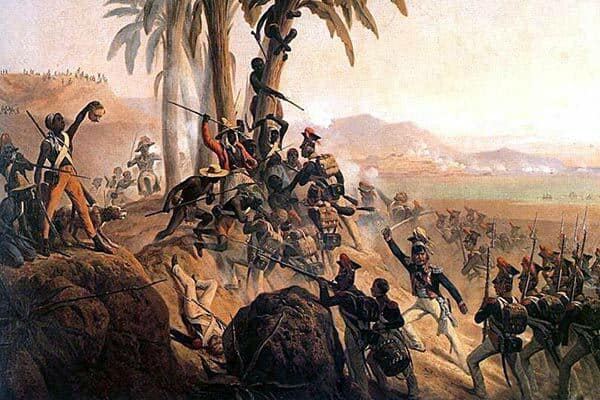 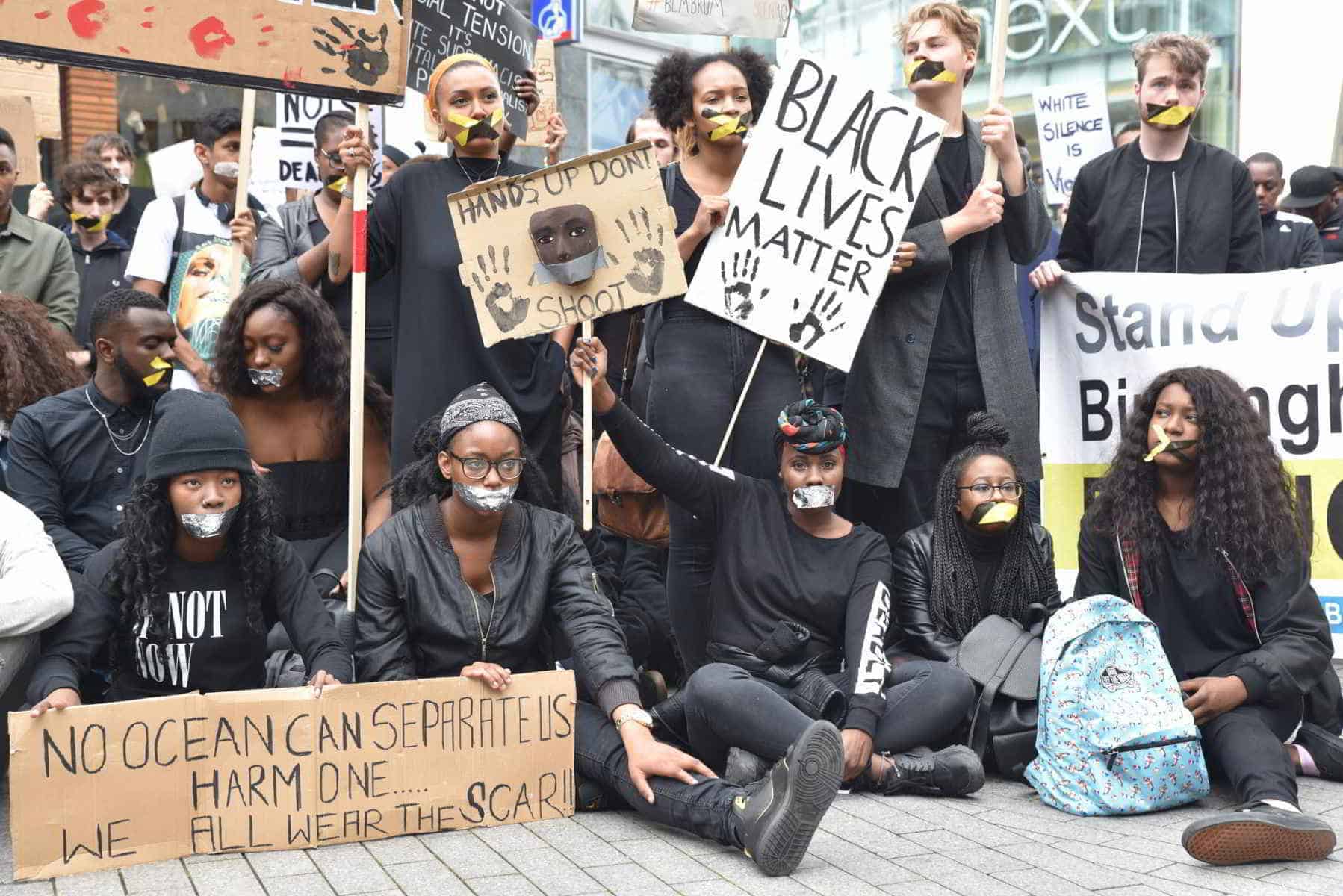 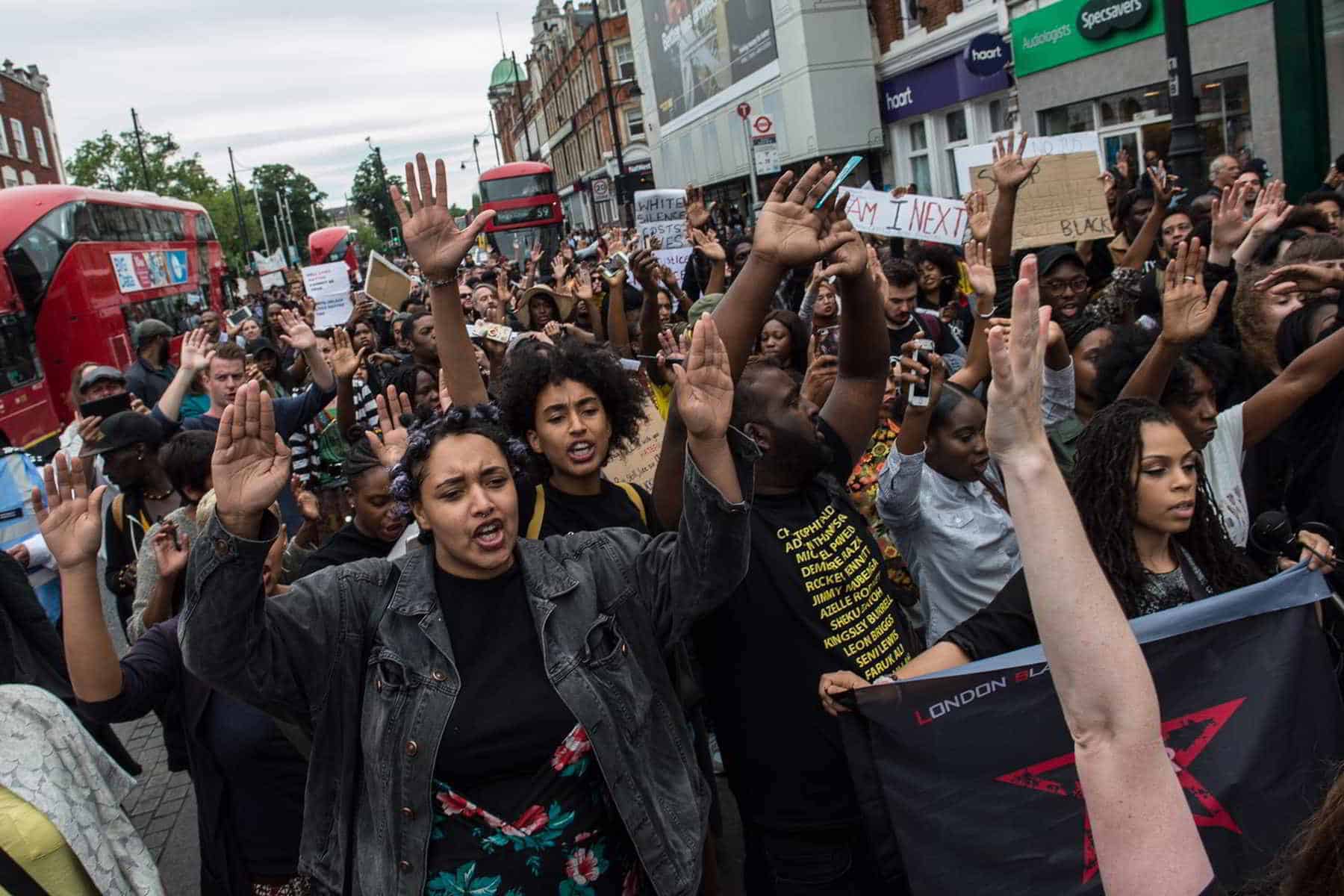 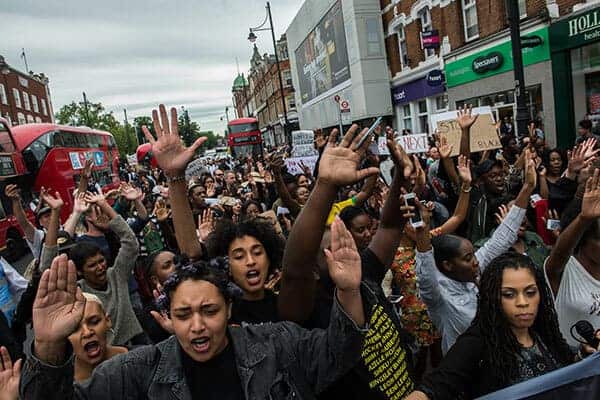 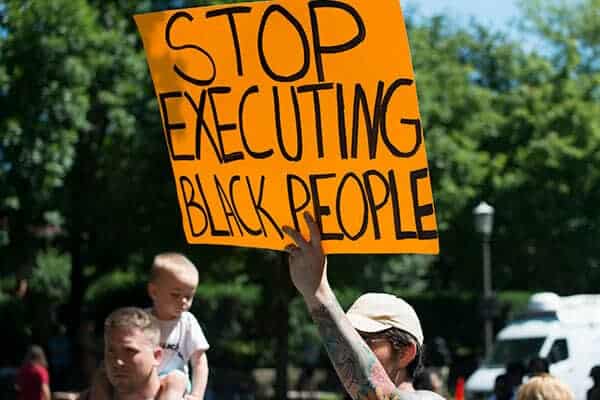 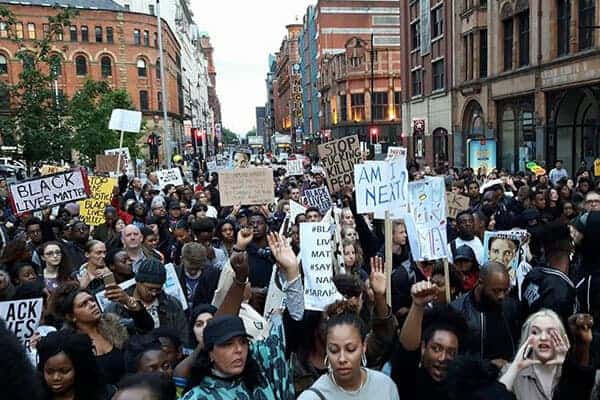 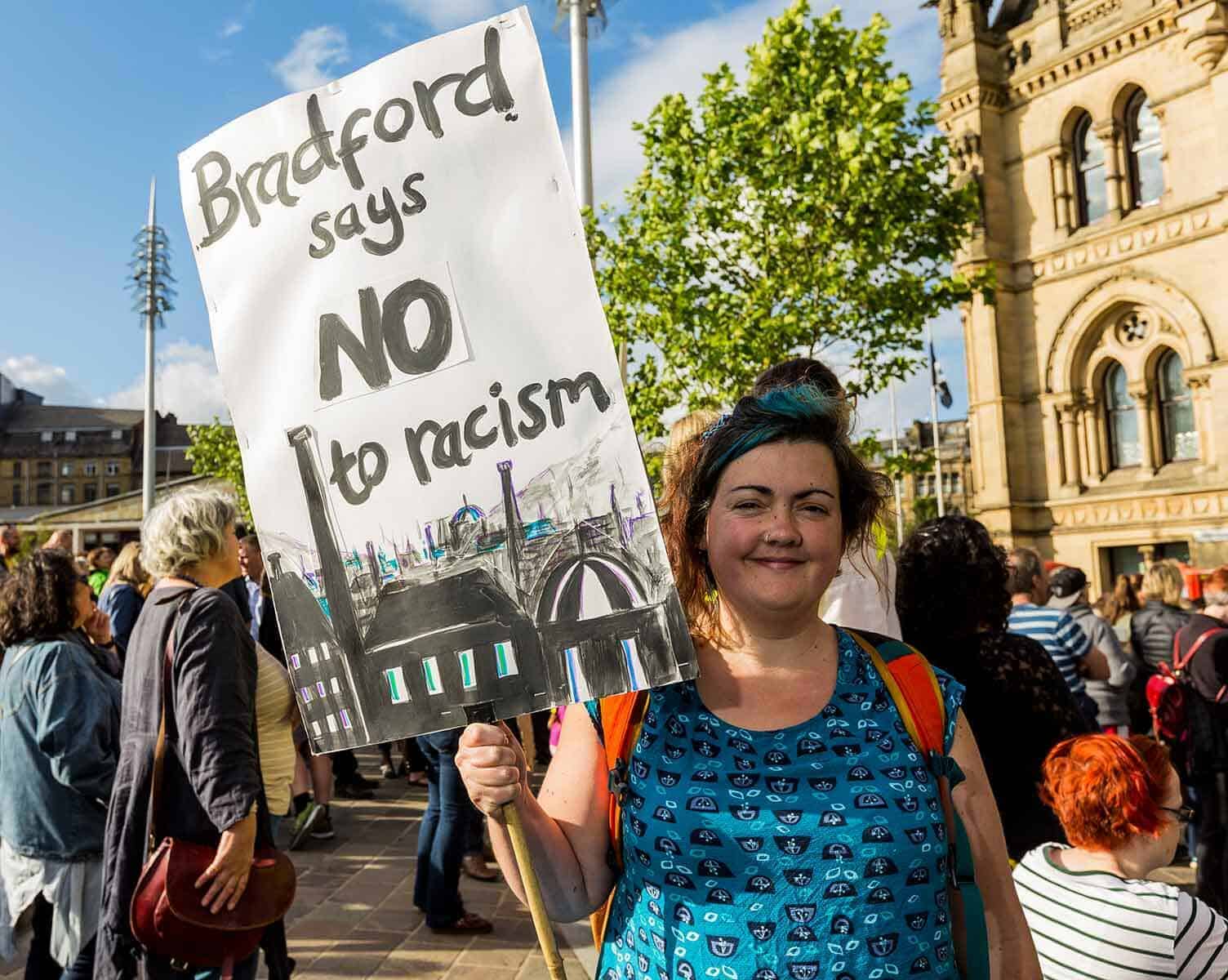 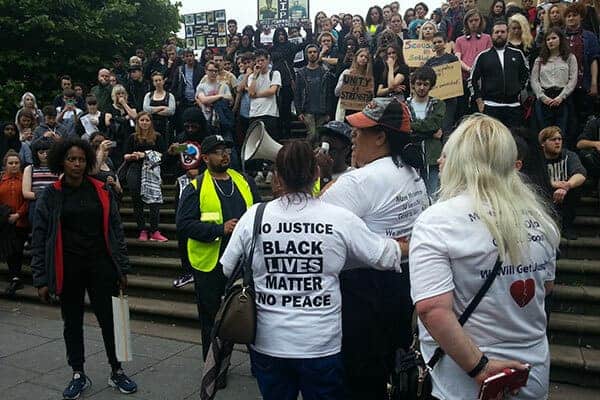 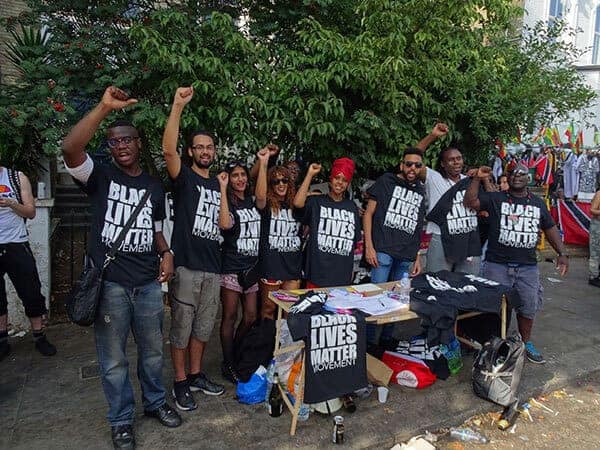