Our sweat, their profits: Muslims have made a great contribution to Europe

When you listen to David Cameron, Angela Merkel, Nicolas Sarkozy and other European leaders slam into multiculturalism, you could think that immigration had been a damaging experience.

And it is astonishing to think that one of the best-selling books in recent German history is Thilo Sarrazin’s anti-Muslim diatribe, Germany Abolishes Itself.

As Liz Fekete points out in Defending Multiculturalism, Sarrazin, formerly a leading member of the Labour-like SPD party, has been richly rewarded for his grotesque efforts.

His book is one of the most read in Germany since Hitler’s Mein Kampf and has made its author a multi-millionaire.

Sarrazin’s message is that a once great nation is now at great risk of descending into imbecility because Turkish immigrants are of “lower intelligence”.

Who does Sarazzin, and those who support his message, think made Germany the economic power it is today?

Western Europe benefited massively from the labour of millions of migrants from Muslim countries around the Mediterranean and North Africa.

After the Second World War, the German economy was desperate for workers. After the building of the Berlin Wall in 1961 cut off labour from Eastern Europe, German capitalism increasingly turned south.

Bosses used this labour to fuel the 1960s “miracle” boom but refused to grant the workers rights. Instead they were labelled “Gastarbeiter” (guest workers), and allowed temporary work permits but refused citizenship.

As Robert Moore wrote in his 1975 book, Racism and Black Resistance in Britain, “Willy Brandt, the former West German Chancellor, went so far as to say that Germany’s ‘economic miracle’ was built on the labour of ‘guestworkers’.

“In fact Germany’s and Europe’s post-war prosperity has been built on a combination of labour and cheap raw material from the less developed countries.”

At the end of the Second World War the French government looked on at a nation and economy in ruins. It set up an Office National d’Immigration to encourage labour to move to there.

So today, as French president Nicolas Sarkozy announces that “multiculturalism has failed” and passes more laws to persecute France’s Muslims, he would do well to recall that modern France would not even exist without the labour of those he attacks.

The car industry across Europe is a good example of this dependence.

It could only expand in the 1960s and 1970s on the back of migrant labour. By the mid-1970s, 50 percent of all car assembly line workers in West Germany were immigrants.

Some four out of ten of those working in Sweden’s Volvo factories were migrants, mostly from southern Europe.

So key were they to the enterprise that Volvo levied a tax on each car made to fund a language programme for its workers.

Switzerland’s economy has rested on migrant labour for decades. In the 1970s, 40 percent of all factory workers and over half of all hotel workers were migrants.

The Swiss even had regulations preventing migrant workers from leaving jobs in catering and agriculture, to maximise profits.

The same can be said about how immigrant labour was central to rebuilding Britain.

Though few newspaper columnists have a good word to say about migrants, we should ask where towns and cities such as Leicester, Bradford, Birmingham, Rochdale, Oldham, Burnley, Blackburn and Preston would be without the dogged labour of migrants.

Not only did these workers and their families revive declining local industries, such as textiles and manufacturing, they helped breathe new life into those communities.

We should see the temples, mosques and new churches they built there, not as centres of conspiracy or religious superstition, but as symbols of all the struggles of those who have helped revitalise Britain.

In a similar way we should resist the temptation to see the attacks on multiculturalism merely as some kind of academic debate. There is more at stake.

The multicultural society we enjoy today was built on unifying struggles of ordinary people.

It is woven into the DNA of class struggle in this country—from the immigrants who defended themselves against race riots, to the battles of black youth against racist policing.

From the fight to turn the trade unions into bastions of anti-racism to the school struggles for anti-racist teaching.

From the multi-racial riots that erupted in our inner cities under Margaret Thatcher’s Tory government, to the stubborn defence of our communities from fascist attacks.

These are multicultural stories of resistance we can all share in.

Defending Multiculturalism: A Guide for the Movement
Edited by Hassan Mahamdallie. £8

A vibrant, informative collection of essays that sets out to defend Britain’s multicultural way of life 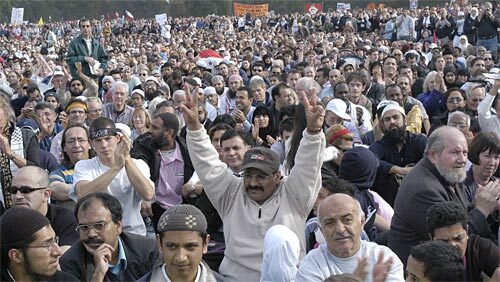