Out to defend pensions

This article is over 18 years, 5 months old
Workers at a chemical firm are fighting over an issue facing a growing number of people - the right to a decent retirement
By Kate Coyne
Downloading PDF. Please wait...
Saturday 26 July 2003

AROUND 600 workers struck last week at Rhodia’s factories in Oldbury in the West Midlands and Widnes in Cheshire. They are out to defend their right to have a decent retirement, and the ‘final salary’ pension scheme which guarantees that. Their multinational employer wants to join a growing stampede of bosses who are out to end such schemes.

‘Companies see the final salary pension scheme as a chain around their necks which they can easily cast off,’ says Rhodia worker Bob Oakes. ‘There’s an emerging pattern. First they stop new members joining. Then they look at freezing the scheme. And finally they shut it down. I have got 15 years left working and on a money purchasing or stakeholder scheme I wouldn’t build up enough for when I retire. The state pension is bloody inadequate. My parents have to rely on this and they are on the breadline. They struggle to maintain themselves – simple things like running a car become really difficult. They have no holidays, obviously, and considering that my father has worked all his life he’s not got a lot to show for it.’

Fellow Rhodia worker Michael Rand added, ‘The government is storing up trouble for itself by allowing companies to get away with this. They tell people to save for their pensions but if they really wanted to help they wouldn’t let companies close these schemes.’

The Rhodia strike is one of the first large-scale strikes to defend final salary pension schemes. Further action is planned which could see parts of the plants closed for up to nine days. The firm wants to close the pension scheme to new entrants. Workers see that move as a step towards scrapping it completely. Michael Rand explained, ‘We have to take action now because everybody is on the final salary pension scheme. If people come in on a ‘money purchasing’ scheme we will have a two-tier workforce. If we wait until then, when not everyone is in the scheme, we will have less power to oppose it. Management will then try to close the scheme completely.’

Rhodia says a ‘money purchasing’ pension scheme will be cheaper to run. They also say it will solve the pension fund’s £80 million deficit. It may be cheaper for the company. It won’t be for workers who will face an uncertain, and possibly poverty-stricken, retirement. As for the deficit, workers point out that during the 1980s the fund had a £27 million surplus. The factory was then owned by Tenneco. Workers believe both Tenneco and Rhodia have taken ‘pensions holidays’.

In the 1980s and 1990s when stockmarkets were booming many company pension funds developed huge surpluses, as the value of the investments they made soared. Many companies took advantage of this to stop paying their contributions into the fund for several years. These ‘pensions holidays’ boosted company profits, and did not apply to workers who generally continued to pay contributions.

As stockmarkets have fallen in recent years many companies have started squealing about pension funds being in deficit. But across Britain as a whole if companies simply paid in the amounts they should have during their ‘pensions holidays’ the deficits in funds today would disappear.

Some of the Rhodia workers talked about how French workers had staged massive strikes against attacks on pension rights through May and June this year. Neil Stanley said, ‘People have been talking about the French strikes a little bit. They believe our pension laws and employment laws are a bit weak, and given that it’s a French-owned company they think they can do whatever they want – whereas if French workers were involved they wouldn’t dare.’

Behind the Rhodia strike is a simple demand that every worker will recognise. Louise Collett said, ‘I am here today because I want to protect my pension – I want to have a good standard of life so I can enjoy my retirement and my family. ‘I don’t think that’s too much to ask for.’

What fight is about

MANY WORKERS have won ‘final salary’ pension schemes over the years. These give a guaranteed pension based on how much someone is earning at the end of their working life. Workers and their employers contribute to the scheme. Hundreds of companies have closed, or want to close, these schemes. Instead they want workers to go onto ‘money purchase’ schemes where the company pays less.

The key difference is that these are linked to the ups and downs of the stockmarket, and give no guarantee of a decent pension. ‘I could have a money purchasing scheme for 25 years and when I retire I could get next to nothing,’ says Rhodia worker Martin Hale. Fellow Rhodia worker Richard Harrison adds, ‘These schemes are like the lottery. It depends entirely on how the stockmarket performs.’ 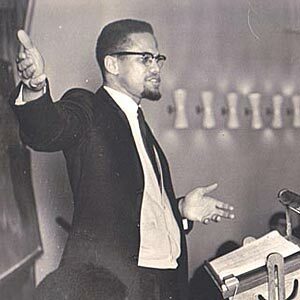 Malcolm X: Fight back by any means necessary