This article is over 14 years, 6 months old
Hundreds of workers at Oxford mail centre walked out on unofficial strike on Monday after union rep Steve Gill was suspended after a complaint about his behaviour during the last strike.
Downloading PDF. Please wait...
Tuesday 17 July 2007

Hundreds of workers at Oxford mail centre walked out on unofficial strike on Monday after union rep Steve Gill was suspended after a complaint about his behaviour during the last strike.

A local CWU union official told Socialist Worker, “It was a spontaneous reaction. Management have abused procedure. The workforce are already furious at the level of bullying and hypocrisy.

“We have managers here who are accused of harassment who remain supervising the people who have made the accusations against them. But Steve was suspended even though the person who made the complaint is in an office 20 miles away.

“There was no reason to suspend him. He has been treated differently to a white worker, or a non-union member, or a manager would have been. We want justice for Steve and another worker who is threatened with suspension.”

On Tuesday, Abingdon office in the Oxford area walked out unofficially after management tried to collapse two deliveries into one without extra pay.

A worker was suspended for refusing this. But after the walkout management completely backed off and Abingdon returned to work.

If the Oxford situation is not resolved, workers there will need the support of other postal workers. It is a longstanding principle not to touch work from a striking office.

Around 100 workers at Bristol North Delivery Office in Montpelier struck officially on Monday in a separate dispute to the national strike.

Workers are fighting the imposition of new conditions without agreement. Monday’s action was even stronger than the previous Friday’s. Pickets were jubilant when a young worker joined the union and stayed on the picket line all day. 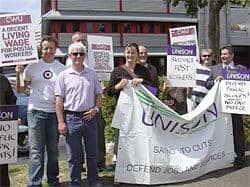