Paris is the focus for the spirit of the struggle

This article is over 18 years, 2 months old
Thousands of trade unionists, campaigners and anti-war activists are converging from across Europe on Paris for the second European Social Forum (ESF) in two weeks time. There they will join many thousands more activists from France
Downloading PDF. Please wait...
Saturday 01 November 2003

THE EUROPEAN Social Forum aims to bring together the resistance across the continent to war and neo-liberalism. It takes place from 12 to 16 November with hundreds of meetings, workshops, debates and countless opportunities for informal discussions. A high point will be a demonstration on Saturday 15 November.

Hundreds of people have already arranged to travel from Britain. They range from black trade unionists in Croydon, south London, to school students and representatives of local anti-war coalitions.

‘We’ve had a tremendous response from people wanting to go to the ESF,’ says Guy Taylor from the anti-capitalist group Globalise Resistance. ‘Tickets for the special booking on the Eurostar have been snapped up. Other people are making their own way there. People are, of course, heavily involved in the preparations for the protests against George Bush’s visit to Britain the week after the ESF.

‘So some people are travelling to Paris for just part of the forum, ensuring they are there for the Saturday demonstration. The delegation from Britain will really reflect the kind of movement that’s been built over the last 12 months.’

The first ESF in Florence, Italy, last year issued the call for anti-war protests on 15 February, which became a global day of action. This year activists from across Europe aim to achieve similar levels of coordination against war and the neo-liberal offensive imposed by every government.

Many are also arguing to develop the movement in a militant, left wing direction. ‘The mobilisation for the ESF from the Netherlands is going to be one of the largest up to now for such an event,’ says Pepijn Brandon. ‘Some 300 people had already registered by the start of this week. More organisations are involved than ever, from the youth section of the biggest social democrat party to the Palestine committee. The ESF has become one of the main issues of the large coalition against the neo-liberal cuts package of the Dutch government. In the capital, The Hague, a group of students have got 62 people to register. A school student from a small town asked us whether the ESF is open to people under 18-it is!’

In every country people are bringing the flavour of the battles they face to Paris. ‘A recent poll found 62 percent of people felt it doesn’t matter who runs the country, the result is the same,’ says Jan from Socialist Worker’s sister paper in Germany, Linksruck.

‘Gerhard Schröder’s Social Democrat/Green coalition is imposing huge cuts in welfare. His standing in the polls has plummeted to 22 percent. A major protest against welfare cuts was planned for Saturday of this week. The mobilisation from Germany for the ESF aims to bring our experiences to other activists in Paris.’

Activists from Seville in southern Spain are travelling by coach to Paris. They have been a driving force in the movement against Spanish prime minister Jose Maria Aznar’s support for Bush’s war and attacks on workers’ living standards at home.

In Greece ‘there is a growing revolt among workers at the government of Costas Simitis, our equivalent of Tony Blair,’ says Panos Garganas. ‘Bin workers were on strike all last week. They ended up clashing with the riot police when the law was used to end their strike. There are struggles among public sector workers, hospital workers, teachers and others. And of course the feeling against the war has not gone away. It is feeding the other struggles. People are proud down here that the threat of mass protests forced US Secretary of State Colin Powell to cancel a planned visit to Athens. There will be a significant mobilisation for Paris. On the Monday after, we have a demonstration that marks the 30th anniversary of the uprising against the US-backed Greek dictatorship in 1973. It will be an important moment for the movement and a chance to speed up the process of developing a socialist alternative to our New Labour style government.’

Activists are heading to Paris from Italy too. Millions of workers joined a four-hour general strike on Friday of last week against Italian prime minister Silvio Berlusconi’s plans to slash pensions. There were 100 demonstrations across Italy.

Half the country’s trains were not running and 150 flights were cancelled. Some of the people who organised that will be in Paris in two weeks time. It’s not too late to join them. 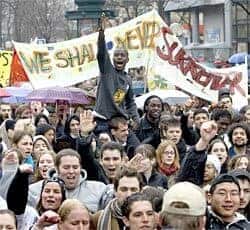 Treaty of Rome anniversary: a European union for neoliberals