This article is over 12 years, 7 months old
Award winning investigative journalist and leading socialist campaigner Paul Foot was the bane of corrupt politicians and the champion of those who fell victim to miscarriages of justice. He completed his final book shortly before he died in 2004. The
Downloading PDF. Please wait...
Tuesday 26 May 2009

The history of the twentieth century in Britain has shown that whenever a Labour government in parliamentary office has found itself in conflict with the class wielding economic and industrial power, the government has been resisted, humiliated or defeated, usually all three.

On all sides, the elected government is at a disadvantage. Its members are elected by geographic constituency and are constrained by the necessity to represent all their constituents whatever class they come from or support.

Elected governments move at a snail’s pace, from Bill to Bill, formality to formality. Their ministries are cluttered with the most ridiculous pomp and tradition.

They are obliged to submit their proposed laws to the Crown and to the House of Lords, which is dominated by the “great and good” (not elected).

The ruling-class chieftains have at their disposal whole armies of their own advisers and intellectuals, none of them elected.

They take daily decisions affecting hundreds of thousands of people, sacking them, disciplining them, cutting their wages, sending them off to war, without any real threat of obstruction from the elected Parliament.

British representative democracy is founded on the notion of one person one vote. An industrial magnate has one vote, and so does each worker he can sack or impoverish.

A newspaper proprietor has one vote, so does each of the readers he deceives or seduces every day of the week. Are all these people really equally represented?

Or does not the mighty, unrepresentative economic power of the wealthy minority consistently and completely overwhelm the representative power of Parliament?

Corruption in all its forms has always been a consistent companion of class rule. One of the promises of the early social democrats was that they would put a stop to corruption.

In fact, corruption has prospered mightily in the age of social democracy. Again and again, social democratic representatives have found themselves at the mercy of the capitalist bribe.

The ministerial career of Jimmy Thomas, the trade-union leader who played so heroic a role in the betrayal of the [1926] general strike, ended with a whimper when he was caught leaking budget secrets to his wealthy golfing mates who speedily converted the information into a ripe profit on the stock exchange.

The notorious Poulson scandal of the 1960s [a property developer who bribed politicians] engulfed whole Labour councils who were bewitched by the Methodist architect and his Methodist largesse.

T Dan Smith [leader of Newcastle upon Tyne City Council], a Labour hero of the early 1960s, felt it was time he turned his considerable talent into making money for himself and ended up in prison with Poulson.

New Labour in the mid-1990s made a lot of political capital out of “sleaze”, a new word coined to describe the rather minor Tory Party corruption of that period.

Yet when Labour ministers took office in 1997, and flung themselves headlong at the feet of the rich, they felt, like Dan Smith, that their time had come.

Very soon their dependence on consultants and lobbyists from industry and finance landed the new government in further heaps of sleaze, as we have seen.

Another example was when the great sleaze slagheap of Enron finally collapsed in bankruptcy in 2000. Labour ministers scurried to cover the tracks of Enron’s consultants at Labour Party dinners and the close contacts the Labour leaders had established with Enron’s corrupt accountants.

Corruption is a natural ally of capitalism, and British Labour, as it made peace with capitalism, increasingly fell victim to corruption.

Paul Foot’s The Vote: How it was Won, and How it Was Undermined is available at Bookmarks, the socialist bookshop. Phone 020 7637 1848 or go to » www.bookmarksbookshop.co.uk 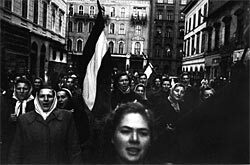