This article is over 17 years, 6 months old
"CHOICE IS the political buzzword this week, but up until Respect was formed voters had no real choice.
Downloading PDF. Please wait...
Saturday 10 July 2004

“CHOICE IS the political buzzword this week, but up until Respect was formed voters had no real choice.

“We offer that choice and the reception we are getting is brilliant.”

This is how Respect candidate Yvonne Ridley described the parliamentary by-election campaign in the Leicester South constituency as around 200 Respect supporters mobilised over the weekend.

The by-election takes place next Thursday, the same day as the Birmingham Hodge Hill election. Together they will be a major test for the Blair government.

Yvonne told Socialist Worker, “We have been out on the battle bus all day, and people have been tooting their horns and waving.

“Other people have been out leafleting, canvassing and sticking placards up on lamp-posts.

“People recognise Respect as something new, something refreshing. By the end of this weekend, every voter in the constituency will have had at least one leaflet.

“It is really important that people keep campaigning. Neither the Greens or UKIP felt they could stand.

“All the other parties have shamelessly reinvented themselves as anti-war. They have all the resources. But we have our enthusiastic supporters and our rivals are taken aback when they see the support we have.”

Respect won over 9 percent of the vote in Leicester in the European elections. The candidate, Fayyaz Suleman, is now Yvonne Ridley’s election agent.

He told Socialist Worker, “The campaign is going brilliantly. People don’t want to vote for Labour because of the war, and a section of the community also positively support Respect.

“A lot of people are still hurting because of the war, but we are also campaigning against the cuts that hurt every disadvantaged community, be it the closure of women’s groups or tenants’ associations.”

Christine is helping to run Respect’s bustling headquarters in the constituency. She said, “People feel sky-high after campaigning.

“We leafleted a meeting of 500 Muslim women, and it was just a pleasure because so many took leaflets and posters to pass round.

“The guys working at one pizza shop took a pile of leaflets to drop off with every pizza they deliver.

“Another shop donated a huge tray of samosas and bhajis to the campaigners.

“The levels of commitment are great. People in Leicester are taking annual leave next week and one couple going on holiday diverted their journey so they could do some campaigning.

“It really lifts Respect supporters in Leicester to have so many people from places like Cambridge University, Milton Keynes, Sheffield, Leeds and London coming to help out.”

Oliur Rahman is one of those people. He is standing in a council by-election in Towers Hamlets on 29 July after polling 20 percent in east London for the Assembly elections, one of Respect’s best votes.

He told Socialist Worker, “I get a very good feeling about the campaign here in Leicester, as well as my own campaign in the by-election. It’s time we had politicians who stand up for the people who have elected them, rather than just worrying about themselves and their own careers.”

Richard Buckwell and Andy Jones travelled from Nottingham to Leicester. They told Socialist Worker, “We have had a fantastic time. One woman came running after us when she read our leaflet asking for a window poster.

“There’s no hanging around. As soon as you arrive you get sent out to get campaigning. And the response has been great.”

Amarra, from Huddersfield, said, “It has been lots of fun today. There is a really positive atmosphere round the whole campaign and you feel you are making a real difference, not just sitting at home moaning about the world.”

Mike Simons travelled from Hackney to go canvassing in Leicester on Sunday. He said, “I met a lot of people who voted Respect in the European elections. They were really buzzing and really pleased to see us. I didn’t meet anyone who said they would vote Labour. The Labour candidate, Sir Peter Soulsby, closed schools when he was on the council and people remember that. And a lot of people were shocked to learn that the Lib Dems are in coalition with the Tories on the council. It was great canvassing because people are really fed up with dumbed-down politics. They were really pleased to have someone knock on their door and have a serious conversation, even if they didn’t agree with everything. I can’t wait to go back.”

THE SMALL shop on Birmingham’s Coventry Road has been transformed by its latest residents.

Posters, leaflets and campaign tabloids are stacked on shelves and the floor. Huge printed letters cram the window spelling out “The battle for Hodge Hill”.

A political bookstall has been set up in one corner. Maps plaster the walls. Dozens of people come and go in a frenzy of excitement fuelled by coffee and politics.

This is the campaign headquarters for Birmingham Respect.

Bringing order to the chaos is Pervez, who sits behind a desk covered in maps and marker pens issuing directions to teams of leafleters. He is running the campaign with military precision.

He says, “We’ve sent out 30,000 leaflets already. About a third of the constituency has got the second leaflet. We should get the rest covered today.”

A coachload of Respect supporters arrive from west London and Pervez sends them off to back up a local team in one of the wards in the north of the constituency. Other teams are out placarding—every lamp-post in Hodge Hill seems to carry a Respect placard.

Another group are travelling round on an open-top campaign bus with Respect candidate John Rees.

New Labour are terrified about losing control of the constituency to the Lib Dems and have flooded the area with publicity material.

But Respect, which won some of its best European election results in Birmingham, is determined to mount a challenge on an even bigger scale.

Respect members from across the country have answered their call for support. Last weekend there were cars and coachloads from Manchester, Merseyside, Scotland and London.

Everywhere Respect members go they find an eager audience. Adam Yosef is one of the Respect members on the campaign bus, which zooms around the constituency pumping out leaflets and Aretha Franklin’s “Respect”.

He says, “We knew that we’d get a good response in the Muslim areas of the constituency—but it has been great everywhere. Today lots of people are in their gardens and in the parks, having barbecues and enjoying the sun. When they hear the music coming from the bus they have been dancing in the street to the music.”

As the campaign bus speeds past, residents—from young Asian school kids to white pensioners—clap and wave. Car drivers use their horns to signal their support.

Rosina came across Respect towards the end of the European election campaign. Now she is at the heart of the battle for Hodge Hill. She says, “I was really frustrated with politics. I thought it was futile to get involved—and then I came across Respect. Suddenly I felt there was something I could channel my anger into.”

The campaign bus stops in Alum Rock’s busy shopping area, where John Rees joins other Respect members for a walkabout.

Kahn eagerly takes a leaflet and says, “I’m voing for Respect to oppose the war. Bush and Blair are doing stupid things around the world.”

Shafiq adds, “I’ll back Respect, mainly because of the war. But it’s also about hospitals and schools. You go in hospitals and they are really bad. I usually don’t vote—but now I’m voting Respect.”

Local teenagers climb on board the bus to help with the campaign, bellowing “Vote Respect” and “Get Tony Blair” as it sets off again.

By the time the bus returns to the Respect headquarters, Pervez has covered most of his map with fluorescent marker pen. “We’ve covered 90 percent of the constituency with the second leaflet,” he explains.

Respect supporters who travelled to Birmingham for the day were delighted.

Michael Coward was an active Labour Party member in Brentworth and Isleworth for many years. He says, “It was good today—people have been very favourable towards Respect.

“The turning point for me was the Iraq war. But before that it was education, railways and the NHS—they’re all going private. I went to a meeting with George Galloway and found out about Respect. I left Labour and now I’m supporting Respect’s campaign.” 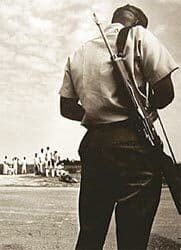 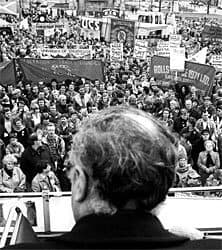 Union bureaucrats and the rank & file

Take the movement to a new level