This article is over 17 years, 4 months old
PETER MANDELSON is quitting his job as MP for Hartlepool to take up a lucrative post as a European commissioner. Mandelson used his regular column in the Hartlepool Mail to attack Respect prospective candidate JOHN BLOOM. Here is John’s reply.
Downloading PDF. Please wait...
Saturday 11 September 2004

PETER MANDELSON asks me directly if I am comfortable in the company of “the soon to be ex-MP George Galloway”.

I am indeed more than comfortable to be working with a man described by Tony Benn as “one of the finest socialists, internationalists and democrats of his generation.”

Unlike the actual soon to be ex-MP, Peter Mandelson, George Galloway is not quitting.

George will be a candidate in the forthcoming general election.

The man who shouted hysterically, “I’m a fighter, not a quitter,” in 2001 should avoid lecturing others on quitting and indeed fighting.

As someone who has campaigned and fought for social and political progress in this town for two decades, I can assure Peter and your readers that I shall never quit Hartlepool for the plush pastures of Brussels.

Mr Mandelson’s companions are, of course, beyond reproach.

There is Tony Blair, a warmonger who lied to parliament and broke international law.

And there are the highly dubious Hinduja brothers.

Is this the sort of company you should have kept, Peter?

He should be worried

COULD IT be that the original New Labour spin master, Peter Mandelson, is losing his touch?

His unwise attack on John Bloom and George Galloway has given the Respect campaign in Hartlepool a real lift.

Our campaign has made much of the running.

We have the best office site, the most enthusiastic campaign manager and, most important, a liked and respected local campaigner as candidate. New Labour, on the other hand, has chosen an inexperienced 32 year old who needs minders.

To date, we have delivered our first leaflet to most of the town. We have set up a number of meetings and events, and more are timetabled throughout September and early October.

There will be a very important meeting on the future of the local hospital involving the Save Our Hospital campaign and the health service union, Unison.

An anti-war public meeting with Rose Gentle speaking is scheduled for 21 September.

Folk singer Roy Bailey is doing a fundraising gig in Darlington on 17 September.

And Britain’s best film-maker, Ken Loach, is speaking at the local college on 30 September.

We need more offers of help of every kind. As John Bloom said, “Wouldn’t it be great if we heard one of the Dimblebys saying on declaration night, ‘New Labour—born in Islington, died in Iraq, buried in Hartlepool’.”

VOTERS WERE set to go to the polls in the Millwall council by-election on Thursday this week, two days after Socialist Worker went to press. Respect member Paul McGarr was contesting the seat, which is in the Isle of Dogs, east London. Local activist MARTIN EMPSON told Socialist Worker about the campaign.

THE CAMPAIGN is going much better than anyone thought it could. The constituency is very different from Stepney, where Oliur Rahman won the seat for Respect in July.

We are finding an incredible bitterness to the council and to all elected politicians, from both white people and Bengalis.

So people reject the idea of voting. Only 20 percent of voters turned out to vote in the elections on 10 June. But many are also open to the idea of a real political alternative.

You have to tell them that voting for Respect will give Labour a much bigger shock that not voting for anyone.

And I think we are the only people who can keep the Tories out. They got the most votes in the 10 June elections. So there is a real danger that people are so fed up with Labour they stay at home, and that lets the Tories in.

The key issue on the doorstep is affordable housing. From every door you knock on you can see Canary Wharf and other luxury developments along the river.

But people are living in overcrowded flats where the repairs never get done, and they are really fearful about where their kids will live.

Paul McGarr, the candidate, is well known for campaigning over the issues people are interested in—the lack of a local prayer room, and the closure of youth facilities and clinics to make room for luxury developments.

We are winning support from ex Labour Party members, from Muslim activists and from trade unionists.

If I were Jim Fitzpatrick, the local Labour MP, I would be worried, because the very people who used to turn out to campaign for Labour at election time are now coming out canvassing for Respect.

Tariq Ali on empire and those who fight it 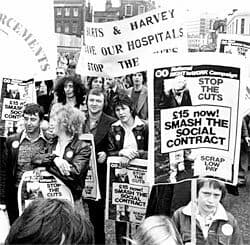