This article is over 13 years, 5 months old
The growth of popular anger against neoliberalism has created an historic opportunity for a new left movement to emerge, writes Andy Zebrowski
Downloading PDF. Please wait...
Tuesday 29 July 2008

Poland has been presented as a neoliberal success story in eastern Europe. And against the background of recession and near recession in several European Union (EU) countries, Polish economic growth looks quite healthy – it is currently 6.4 percent.

But with other countries, especially Germany, in trouble the fear is that the growing economic crisis will hurt Poland too.

Despite this unemployment is decreasing, from 20 percent a few years ago to around 10 percent today, though this fall is partially due to a mass emigration in search of jobs. In some sectors in Poland, such as construction, employers are crying out for workers.

This means that workers are feeling more confident to fight. Government figures show that two years ago there were 659 collective disputes – last year there were over 2,800, mostly over wages.

Inflation is fuelling the militancy. Many groups of workers are winning without strikes, with the threat of strike action enough to win a pay increase.

Unions are organising in sectors that were previously non-union, such as among security guards and in supermarkets. Recently the first ever strike in a Polish supermarket took place in Tesco.

The worst insult in politics is now to call someone a “liberal” or a “neoliberal”. The Civic Platform, the most pro-business party, won last October’s parliamentary elections by pretending it was not neoliberal.

The government wants to attack workers’ rights, including depriving 900,000 people of the right to early retirement.

But it does not know how to go about its attacks in the face of workers’ growing confidence.

In these conditions, the prospects for building a genuine left in Poland with broad support are good. People often have left wing views without calling themselves left wing.

Unfortunately, the left is commonly associated with 50 years of a Stalinist state that ruled in the name of Communism before 1990.

It is also connected with the free market and pro-war policies of the “post-communist” SLD social democrats.

Despite this, opinion polls suggest people would be open to a new, authentic left if activists seize the opportunity to build one now.

In a poll conducted in April people were asked what kind of party they would like to see.

Some 89 percent said they wanted a party whose aim was to help the poor and excluded, and 62 percent wanted a party that cared for the interests of wage earners.

While 59 percent also said they wanted a party that would fight for the rights of women and minorities – including sexual minorities. This is important in a country where the Catholic church has a huge influence.

Other polls show most people opposed the wars in Iraq and Afghanistan, where Polish troops were deployed, and the installation of the US nuclear missile “shield” in Poland, which many see as aimed at Russia. The majority of the population support strikers.

Things have changed dramatically in Poland. It is almost 20 years since cheering crowds, with hopes that

the free market would transform their lives, greeted US president George Bush senior.

When his son came to Poland last year he was protected by thousands of police and kept away from the public.

There have been several interesting developments on the left in recent years. The leaders of August 80 have created the Polish Labour Party (PPP).

This is a left wing party that originates from the Solidarity union movement, which led the revolt against Stalinism but then moved to accept the market.

The PPP criticises neoliberalism, support strikes and tenants evicted from their homes, and takes part in anti-war demonstrations.

It has stood candidates for parliament and the presidency.

Another interesting grouping is made up of the people around the journal Political Critique. They have held meetings that have attracted around 100 people in various towns.

They did good work last year when they produced a newspaper with the nurses protesting outside the prime minister’s office for better pay and conditions.

Some members of the Greens 2004 are involved in Political Critique. This is significant as when the party emerged it was not so critical of neoliberalism.

Other groups include the New Left led by Piotr Ikonowicz, who was the most left wing member of parliament for most of the 1990s, and a non-party grouping called the Young Socialists.

The SLD social democrats are keen to incorporate such people into their orbit to pull them back towards acceptance of the market. But the genuine left is pulling in the other direction.

The most important way to build a real left is to work around issues in which the maximum numbers of those not affiliated to any organisation can be mobilised.

Workers’ struggles are key to building a new left. This can involve a wide number of people not affiliated to any organisation.

The left must mobilise in support of strikes and demonstrations to strengthen them. This can help ensure that trade unionists are not abandoned to the establishment parties.

Trade union and anti-war protests have seen the biggest mobilisations in Poland in recent years.

Poland will be at the centre of the world’s media attention when the United Nations (UN) climate conference is held in Poznan. This is a wonderful opportunity for organising a sizeable protest and an alternative conference.

The mood may be left wing among the public but inside parliament all four parties support some shade of neoliberalism. If we can manage to form a broader left for the European parliamentary elections next year it will be a huge step forward.

A coalition of organisations and unaffiliated activists will encourage workers in their struggles and strengthen movements against war, poverty, discrimination and climate change.

The development of a revolutionary left will be key to successfully linking the different movements and shifting politics to the left.

Voices from Poland’s left: ‘We must organise working people or remain on the margins’ 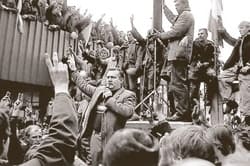