This article is over 14 years, 6 months old
A round up of reports from picket lines around London, during the Friday 29 June one-day strike
Downloading PDF. Please wait...
Friday 29 June 2007

“Morale is up, the strike is solid and there’s no-one in the sub-offices,” reported Paul the CWU rep at Paddington mail centre in West London. Around a dozen pickets gathered.

Paul added, “People are so fed up at the way they’ve been treated and they have seen through Allan Leighton’s lies.”

Pickets talked about the cost of living in London, the housing problem and pointed out Royal Mail has been talking about shutting the mail centre pointing out the property value of the site would be in the many millions.

The strike was solid at the London West End delivery centre in central London. Workers from the PCS civil service workers’ union in the Defra department joined the picket line to show their solidarity.

Dave Morson, the CWU area rep for London West Central, told Socialist Worker, “This dispute is over the future of the post office. Management are not interested in maintaining the same level of service.

“Postal workers are so poorly paid that we need to get pay rises at inflation level to make ends meet.”

Steve Turner, the CWU branch chair of London West End Amal branch, said, “This is our most important dispute in many a year. It is about money, conditions and defending the service. The mood among the workforce is that enough is enough.

“There is no job security any more. Management’s propaganda has put people’s backs up. If this carries on, we will continue the dispute. Coordinated action will be all well and good if it puts pressure on Gordon Brown.”

Gary Blades said, “We’ve got to make a stand and show Royal Mail we’re not going to break.”

Only shamefaced managers trooped in.

“It’s completely solid, and it seems it’s the same across the whole area,” said Dave, a union rep.

Lindsey German, Respect’s candidate for London mayor, offered solidarity to the pickets and presented a donation collected by local Respect members for the strikers.

She was warmly received, and there was widespread anger at the way Labour had unleashed Royal Mail bosses against the workforce.

“I can’t understand why we give so much money to a party that said one thing in opposition and then has acted completely differently in office,” said one picket.

Roger Charles is the branch secretary at Mount Pleasant sorting office. He told Socialist Worker that the strike was really solid. “It’s been really good,” he said.

“Members understand the issue-that this is a fight to secure the future of Royal Mail, as well as pay and conditions.

There were 12 pickets out of 50 workers at the Walworth office in Southwark, south London. The office was solidly out. There was a real move to fight. South London offices at Dulwich, Camberwell and Herne Hill were all locked up at 5.30am.

Some 30 postal workers gathered for a lively picket outside Nine Elms mail centre and delivery office in Vauxhall, south London.

Steve Goss, a day rep for the SW1 delivery office, told Socialist Worker that they were delighted with the strength of the strike. “It was important that we made a big impact on the first national strike day and it has been very solid.”

Another worker from the delivery office said that he had worked there for 20 years. He said, “I have seen the service deteriorate over the last seven years in particular.

Management seem determined to chop up the service and attack it. It’s about preparing it for privatisation.”

Another worker said that the strike proved the importance of trade unions. He said, “I was disappointed to hear Gordon Brown saying that unions would have less influence in the Labour party. I had hoped he would be better than Tony Blair.”

Tam Merryweather, a CWU rep from the mail centre, told Socialist Worker, “Since the ballot, there has been a lot enthusiasm and determination to win this dispute.

“Around 20 people in our mail centre joined the union in the last week. I think management will be shocked by how strong our strike is.”

Graham Simmons the CWU rep for the Cashco workers – drivers who deliver and take cash from the post offices – said that by 6.30am not one of the 100 or so Cashco workers had gone into work. “Closure of crown post offices is a big issue for us, as well as pay and conditions,” he said. “We delivery cash to the offices and we don’t want to see them transferred to WH Smith. They are not in tune with the jobs we do.”

Patrick Paryag, CWU unit rep for the delivery office, said, “Our strike is for public services. That’s why we have a lot of public support. The managers want to make money out of it. We have CWU members out leafleting train and tube stations today to tell people about our dispute.

“United action with teachers and nurses and railworkers would be brilliant if we can get it.

“Our strike is very strong. We have had new people joining the union right up till the strike started.”

At the Bow Locks E16 Mail centre in E16 Angela Mulcahy, the CWU union area processing rep told Socialist Worker, “Our depot is 100 percent solid behind the strike. Only the managers have gone in to cover the special deliveries.” She said that the Crozier and Leighton “had built the strike with their aggressive attitude towards the staff”

John Aries, CWU area distribution rep said that the union was, “ready for a long fight if necessary. We will pressure the government to intervene to stop the ‘cut and burn’ policies that will ruin the postal service. We accept the realities of new technology, but they are using this as an excuse to prepare the service for privatisation.”

The Whitechapel and Burdett Road delivery offices saw lively solid picket lines with 20 to 30 workers. A constant stream of passing motorists beeped their horns in support of the workers.

Richard, a CWU steward at Emma Street in Bethnal Green, east London said, “Management have just not been listening. After today they’ll have to see us. About 120 people work here, and so far it’s totally solid. Any vans you see moving are driven by managers.”

Delivery offices in South East London saw lively pickets in Brockley and New Cross with over ten people outside the offices. Mark a CWU member, told Socialist Worker, “Every body is solidly behind the strike. The managers looked really sheepish this morning which is a good way to start the day.” 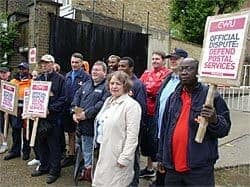 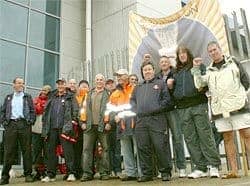 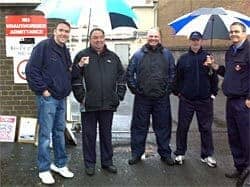 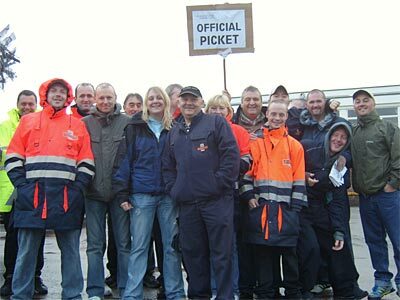 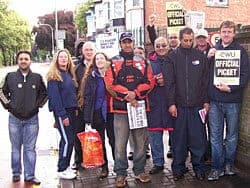