Around 30 trade unionists attended a lively picket line in Cambridge. The CWU members had whistles, megaphones and music in a solid strike. Management tried to bully and harrass those on the picket line by telling them to stop whistling and shouting ‘scab’ at the few mainly managers who were crossing the picket line and breaking the strike. The picket held firm and workers told them ‘You may manage us in there, but this is our picket line and we will not be told what to do’. They soon scurried away and the noise continued.

Paul Turnbull, Eastern CWU No 4 rep organised a rally with speakers from Unison Health and Local Government, PCS, Cambridge Trades Council, Long Road Sixth Form College and Respect. All had the same message – the post workers are leading the fight against an attack on public services.

Steve Sweeney from Cambridge Respect said that the government is intent on spending millions on war yet attacks our public services. He called for united action from public sector workers and said that we need to work hard to ensure that we fight together.

An Organsing for Fighting Unions group is to be set up and was widely supported on the picket line. The PCS speaker from GO East branch joined Respect.

Around 20 pickets were out at 6am at the East London mail centre at Bow Locks on Tuesday. The mood was very strong and combative.

Picket numbers were boosted by the E16 deliveries section who had struck on a different day to the mail centre last week.

By 7am only one worker had gone through the picket line.

“We’ll need to assess how effective the functional strikes have been,” said a CWU union rep. “If there is no movement from the bosses then we will have to consider further and more sustained strikes.”

He added, “On 13 August management will impose new start times on delivery through executive action. That will happen across much of Britain. This is a massive challenge to us all, and could lead to a very different phase of the action. Delivery workers will lose their £12.50 a week payment for an early start, and will have their lives turned upside down at the whim of management.”

We are 100 percent solid in Welwyn Garden City in Hertfordshire, and will not back down from this dispute until a fair and workable agreement has been voted on and accepted by the members.

We are proud of the fact we are 100 percent solid and always will be.

Another day on the picket line, and the strikers’ morale is unbroken!

Delegates from Watford & District Trades Council joined CWU No 1 Branch pickets outside the sorting office in Ascot Road. The strike was so well supported even the sun came out! 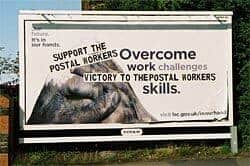 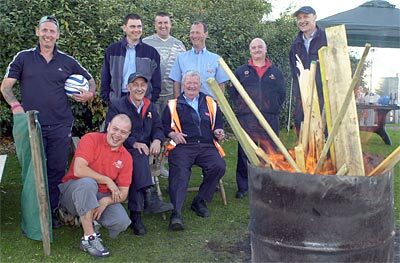