Post workers should ‘Reject the deal, keep fighting until we win’

This article is over 14 years, 9 months old
Here is a response from Socialist Worker supporters in the Royal Mail to the management offer as details of the deal became public.
Downloading PDF. Please wait...
Wednesday 17 October 2007

The deal discussed by the union’s postal executive on Monday and Tuesday would sweep away crucial rights, steal our pensions, clear the way for more bullying, and give managers even more power to order us about.

It is a threat to us all and to the public service. Crucially it is silent on key issues like what happens over disciplinaries and mail centre closures.

Does this really measure up to the sacrifice we’ve made? Does it match the fighting spirit of the strikes, or the courage of those who have stood on picket lines – officially and unofficially?

It doesn’t, and we should reject it. Some of the proposed deal’s main points are:

Pension age to rise to 65. Present scheme members could still retire at 60, but would have to accept “actuarial reductions” in their pensions amounting to thousands of pounds.

The present scheme would be closed to new members from next year, leading to a two-tier workforce. Because the new scheme would be vastly inferior, it would lead to fewer workers joining it, and therefore demands for more cuts in the future.

The deal says we’d be consulted on all these changes, but the union is required to say it supports them in principle.

Royal Mail wants trials of flexible working in every area. And bosses are demanding we accept variation of hours by 30 minutes a day on a ‘swings and roundabouts’ basis.

That means you can be asked to do 30 minutes extra today, and you won’t get overtime. Instead you will get 30 minutes back (when traffic is light) some time in the future.

Workers can also be asked to go to ‘nearby offices’, and to do ‘other work outside their normal duties’.

A delivery worker could be asked to do processing, or a driver to do deliveries. Even more changes will come if we accept this.

Delivery start time will be between 6am and 6.30am. That will affect other functions (some changes are already happening by executive action). As the flexibility scheme beds in, we’d be required to cover for each other’s holidays and sickness. Hidden away in the deal is the abolition of most of the local agreements that have been won in the past.

Don’t believe the hype about a rise of 6.9 percent. The rise offered is 5.4 percent over two years – almost exactly 2.5 percent a year.

The £175 one-off payment on top is money from the ESOS scheme – money we’ve already earned, and that scheme will now be closed. The 1.5 percent on top of the 5.4 percent is triggered only when full flexibility has been totally implemented.

There is nothing, which guarantees no sackings. There is nothing on mail centre closures. Those who back this deal are giving up despite the members’ fury at these changes, and despite a clear willingness to keep fighting – look at the evidence of the unofficial strikes. Kick out this deal and restart the action.

What is going on?

On Tuesday the majority of the postal executive voted to call for amendments to the deal. Some voted to reject the deal even if the amendments were passed – and they were right to do so.

Dave Ward will go back to Royal Mail and ask for changes. The postal executive will then vote again on the deal. They should throw it out.

The real problem is that the Labour government is backing management all the way. Labour has billions for wars and the rich, but cuts for public services and those who work in them. Let’s organise alongside other unions to beat Brown.

Postal workers, send us your opinion on the deal. We will be updating our online coverage» Comment

Discuss the deal and the way forward now 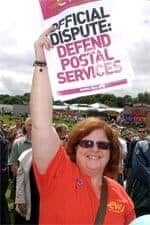 Upbeat mood on picket lines across the country