This article is over 17 years, 1 months old
Many protesters made a clear connection between global poverty and the war in Iraq — despite the frantic efforts of MPH’s leadership to separate the two issues.
Downloading PDF. Please wait...
Sunday 03 July 2005

Many protesters made a clear connection between global poverty and the war in Iraq — despite the frantic efforts of MPH’s leadership to separate the two issues.

“The war and the fact that 30,000 children die from poverty every single day are inextricably linked,” said Jane, who came with a coach organised by her church from Oxford. It’s because of this link that I’m carrying a Stop the War placard as I march today against poverty.

“We will never have a fair world until we put the real needs of people before the wants of the rich.”

Peter, a teacher from Chester, also saw things more generally. “One of the good things about today is the number of different banners and placards from different organisations and campaigns,” he said.

“People aren’t willing to make this a one issue day. We want action not only on poverty, but also on war, the environment, nuclear power and the rights of refugees.

“That’s what makes this march so important. And that’s why it’s also so important to march on Wednesday and to keep on campaigning after that —to make sure that the G8 get the message and act on it.”

Others expressed anger at the attempts by mainstream politicians to co-opt the campaign. “This is not a photo opportunity for Gordon Brown and Tony Blair,” said Colin from Leicester.

“They are a couple of anti-social yobs who deserve a global Asbo — get off the planet or else!”

Lucy a protester from Northern Ireland, said, “It’s about holding the G8 leaders accountable for the terrible things they do in our name. This march is about making the world a fairer place — not just ending poverty, but ending war as well.” 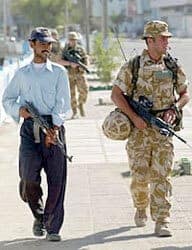 Revelations on the illegal occupation of Iraq 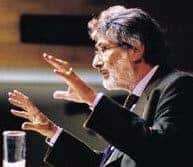