This article is over 15 years, 5 months old
In the second column of our series, Dave Sherry looks at how workers fought back in the 1970s
Downloading PDF. Please wait...
Saturday 19 August 2006

The upturn in industrial militancy that took place from 1970-4 remains the most intense period of British class struggle since the turbulent years at the end of the First World War when Britain stood on the brink of revolution.

What makes the period so special is not just the spirit of rebellion or the militant tactics adopted by the workers involved, but their astonishing success.

Rank and file militancy spread like wildfire to groups previously seen as “middle class” such as teachers and civil servants, and drew in previously unorganised groups such as firefighters, hospital workers and office cleaners.

In 1971, shipyard workers at the Upper Clyde, Glasgow, were the first group to defy the Tory government’s Industrial Relations Act, introduced to curb the power of the unions. The cabinet was reluctant to use the law when the workers took control of the yards.

The chief constable of Glasgow was quick to telephone Downing Street and warn that if the police or the army were used to end the occupation and “work in”, he could not guarantee order in the city.

In 1972 miners’ won a historic victory through mass picketing of the steelworks, the power stations and the coal depots – initiated not by national union leaders, but by rank and file miners.

The turning point in the strike, the battle between miners and police at the Saltley coke depot, involved 100,000 Birmingham trade unionists striking in solidarity with the pickets and 20,000 marching onto the picket line to close the depot.

A young car worker recalled, “For the first time in my life I had a practical demonstration of what workers’ solidarity meant. We all felt so powerful. We felt we could rule the world.”

Later that year the Industrial Relations Act was defeated by an unofficial general strike.

Five dockers jailed in Pentonville prison for defying the laws against picketing were freed, despite union officials saying that the dockers should comply with the courts.

The government climbdown was a victory for the rank and file – it flowed from a rising tide of struggle and fed back into it.

The climax of the rank and file movement came in the winter of 1973-4. War in the Middle East and the ensuing oil crisis triggered an economic slump, the worst since the 1930s.

In November 1973, the miners imposed an overtime ban and raised wage demands.

The ruling class was in a state of panic. Industry minister, John Davies told his family, “We must enjoy this Christmas. It may be our last.”

Sir William Armstrong, head of the civil service, suffered a mental breakdown. The then head of the CBI recalled, “We listened to his lecture about how communists were infiltrating everything.

“It was clear that the immense strain was taking its toll. And two days later, of course, Sir William had to give up.”

The prime minister Edward Heath tried to scare the miners into accepting wage controls by calling a state of emergency. Rumours spread that the government was setting up internment camps for left wing militants.

Heath’s strategy was to frighten the union leaders into isolating the miners and it very nearly worked. At their secret meeting, Hugh Scanlon, leader of the engineering union begged Heath, “Is there anything we can say or do that will satisfy you?”

Heath gambled on a general election on the theme of “Who runs the country?”

In February 1974, against the wishes of their right wing union leader, the miners voted for an all-out strike, which put the lights out across the country.

The union executive kept a tight hold on picketing in order to appear respectable and, as they saw it, not ruin Labour’s election chances.

Yet the movement of coal was halted because other trade unionists, especially rail workers, were solidly behind the miners.

The general election saw Labour back in government, but with only 37 percent of the vote. The ruling class was worried. Their state had been defeated by the collective power of the working class.

Expectations were now running high. Tom Jackson, the right wing leader of the postal workers’ union, described the incoming Labour cabinet as “being like the owner of a giant Las Vegas slot machine that has suddenly got stuck in favour of the customers”.

In the final column next week I will look at the strengths and weaknesses of the workers’ movement in the upturn. 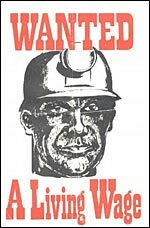