Public sector strikers on 10 May say: ‘We’re going to keep up pensions fight’

This article is over 9 years, 8 months old
Thursday 10 May saw the latest mass strike over pensions. Here is a taste of the pickets
Downloading PDF. Please wait...
Tuesday 15 May 2012

Hundreds of thousands of public sector workers struck on Thursday of last week against Tory attacks on their pensions.

Workers came together for picket lines, and joint marches and rallies across Britain. Prison officers even walked out unofficially on the same day (see box).

The Tories want to make public sector workers pay more into their pensions, work longer and get less when they retire.

There were pickets on virtually every street in Glasgow city centre. Halema Moghul at the solid PCS picket line at Portcullis House said, “We need prolonged national action over pensions—one day is not enough”.

At Ealing Hospital in west London, Unite member Brenda Charles was striking for the future of her 12 year-old daughter. “If all the 68 year olds are still working, what chances will people coming out of college have?” she asked.

“I would strike again for as long as it takes. If all the unions stick together, we’ll get there in the end”.

Catering worker George added, “The rich people in government are parasites. They’re taking from us to make themselves richer.”

At Manchester Metropolitan University many students refused to cross the picket lines and said that they understand and support the strike.

“Every single Unison member I’ve seen has said they should be out with us,” said UCU branch secretary Pura Ariza. “It’s not the same as 30 November,” she added, “but the numbers on the picket line and the support we’ve received have made me feel very confident about taking further action.”

In some places workers reported stronger support for last week’s strike than they had seen on 30 November—a reflection of the sharper anger now that money for increased pension contributions has started to come out of people’s wages.

Dave Owens reports that the strike at Liverpool’s job centre was “phenomenal”. More than 95 percent of

In Norwich Revenue and Customs offices closed as 80 percent of workers struck, while in Oxford jobcentre the strike was 95 percent supported.

But many workers were also concerned about where the dispute is going. The long gaps between action had affected some workplaces.

Clare Richardson, from the UCU branch committee at the College of North East London told Socialist Worker, “Some people have gone in who were out before,” she said. “We’re getting mixed messages from the top of our union and members are really confused, especially those who aren’t activists.”

“But our spirits are high on the picket line. After today the unions must stick together for coordinated action.”

This frustration reflects a desire for leadership. It’s the reason Christine Blower, general secretary of the NUT teaching union, was heckled at the London rally in Westminster Central Hall. Strikers shouted, “Call a strike in June” and, “Why isn’t the NUT striking?”

PCS general secretary Mark Serwotka got a big cheer when he said, “The next strike needs to be even bigger with more unions involved. Today has been brilliant and has put the campaign back on the road.

“We have to be committed to taking more action, there’ll be further national strikes in June and in the PCS there’ll be strikes across the country before then.”

And there was applause for Unite general secretary Len McLuskey when he promised, “There’ll be strikes in June, at the end of summer, the winter and next spring”.

Members of other unions who have rejected the Tories’ pensions offer organised solidarity with strikes.

UCU members in Barnsley received £430 in donations from NUT branches which twinned with striking workplaces, as well as collections from GMB and UCU members at University of Sheffield.

At Birmingham Crown Prosecution Service, the PCS rep said, “People in Unison have come to complain that their general secretary Dave Prentis is not calling strikes. One refused to cross the picket line.”

Eddie Rowley, a Unison rep at London Metropolitan University told Socialist Worker that members had “taken the day off to join the strikers”.

Another Unison member at Hallamshire Hospital in Sheffield told Socialist Worker she had been “picketed out by Unite strikers”.

Unison health workers visited and leafleted the Unite members in the run up to the strike to make it clear that they considered it their fight too.

Several Unison banners were visible on the march in London, while NUT members turned up with a huge crate of pastries and a homemade banner for the strikers.

Hundreds rallied in Newcastle. In Plymouth and Cardiff postal workers in the CWU union refused to cross picket lines.

“We’ll keep going after today, and we need our sister unions to join us.”

Many thanks to everyone who sent reports and photos For our reports on the day the day go to socialistworker.co.uk

Many thanks to everyone who sent reports and photos. For our reports on the day go to socialistworker.co.uk//art.php?id=28447 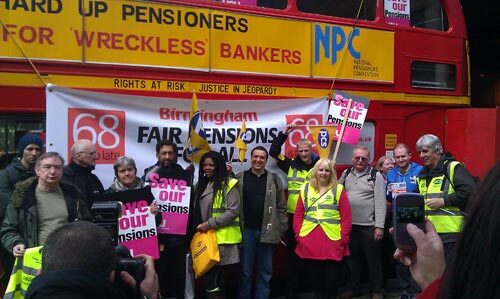 After 10 May: where next for the pensions dispute? 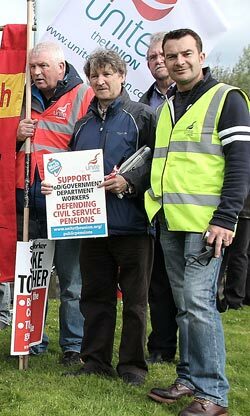 Strikes closed defence sites down on 10 May 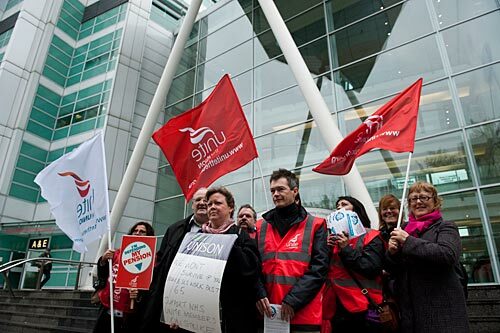 'Our fight is for the NHS'