Radical surgery: snapshots from the fight to save the NHS

This article is over 9 years, 5 months old
Socialist Worker looks at some key events in a long history of radical action to defend the NHS and those who work in it—a history that points to how we can fight health cuts today
Downloading PDF. Please wait...
Monday 31 December 2012

Twenty five years ago this month 38 nurses from North Manchester General Hospital went on strike. They sparked a wave of action that spread across Britain and lasted the rest of the year.

Then as now the Tory government calculated it could “save” millions by slashing pay and public services. They decided to attack nurses’ salaries and cut their overnight allowances.

After the defeat of the Great Miners’ Strike in 1985, the Tories thought they were invincible. But they were wrong.

As the Manchester nurses walked off their wards and straight onto a live news broadcast, thousands of other health workers decided they should join the struggle.

Within days nurses in Glasgow and Edinburgh were out for 24 hours over threatened privatisation. Pressure was growing on the Cohse and Nupe health unions to call a national strike.

“After hearing about Manchester, we organised a massive union meeting at the Royal London Hospital,” said now retired nurse Jim Fagan. “A speaker from the moderate RCN union urged us to join a postcard campaign against the government’s 3 percent pay rise. Inflation was 4 percent.

“But then a Nupe shop steward from Charing Cross Hospital got up. He explained how all the nurses there had recently walked out and how we needed a national strike. He got a massive applause. Afterwards, more than 100 nurses left the RCN and joined Nupe.”

The action was often led by people who had little or no trade union experience rather than those worn down by previous defeats.

Picket lines at the major teaching hospitals were hundreds-strong, swelled at lunchtime by hospital ancillary workers and other sections. The strikes were incredibly popular, with hospitals surrounded by deafening noise as passing drivers hooted their support.

The fight involved many who had never taken action before—and it created a new layer of rank and file leaders. Yet full time trade union officials did their best to stop the struggles from spreading.

The TUC organised a 100,000-strong national demonstration in March but refused to allow any striking nurses to address the rally. It feared the action was spiralling out of union leaders’ control. Union leaders called a national nurses’ strike, which took place on 14 March that year.

The wave of solidarity that greeted the action showed that the TUC was right to worry. Bus drivers, dockers, shipbuilders, council workers and civil service workers all walked out on the day. Many lunchtime and evening rallies were thousands-strong.

The Tories, sensing defeat, decided to up their offer. They promised nurses an average pay rise of 15.3 percent. Four percent would be paid straight away and the rest would come after a regrading exercise.

Union leaders grasped the opportunity to wind down the action. But the Tories’ deal turned out to be a double-cross. They wanted to split the unions by downgrading some staff while rewarding others.

Nurses decided this wasn’t good enough and were back on the picket lines by the end of August. Ten London hospitals, three in Sheffield, three in Manchester and one in Glasgow staged protest strikes against regrading.

In Burnley nurses burned their regrading forms. More workers joined the action in the following weeks. Karen Reissmann, a Cohse member and psychiatric nurse from Springfield Hospital in Manchester, was one of them.

She said, “Some of us had done well out of the regrading. I’d been awarded a 36 percent rise, for instance, which reflected how scared of our strikes the Tories were. But they were trying to play divide and rule by paying some of us far less. We weren’t going to stand for that.

“At a mass meeting in November we voted to strike. We didn’t even know that you were supposed to have a formal ballot—we simply put our hands up and then walked out.

“There were 300 of us, and we stayed out unofficially for a month. Our union was strong. That meant it was us workers, not management, who determined an appropriate level of emergency cover and allocated strikers to work certain shifts.

“That meant we could put maximum pressure on management while ensuring patients didn’t suffer unnecessarily.”

The new strikes spread across hospitals in Manchester, Birmingham, Bolton, Brighton, Bristol, London and Tyneside. There were scores of disputes up and down the country where nurses first worked to rule and later struck.

The leaders of Cohse and Nupe rejoiced as thousands left the no-strike RCN. But they were determined to control the action and not allow rank and file workers to keep the initiative. The strikes were weakened by this lack of national leadership.

“Eventually our union leaders forced us back to work after management made a series of concessions,” said Karen. “They simply couldn’t abide an unofficial strike lasting that long.

“But our month on the picket lines was incredible. We toured Britain speaking to union branches. We raised so much money we had more than we needed for strike pay. Our branch spent the next two years trying to find other strikes to donate it to!”

The national strike wave subsided at the end of the year as the Tories were forced into a series of humiliating climbdowns.

They had started the year hoping to claw back millions by cutting pay and allowances. Now they announced average pay rises of 17.9 percent and millions of pounds in extra funding.

“Most of us got big rises—but that wasn’t the main gain,” said Karen. “For years afterwards management were careful not to piss us off. In our hospital, that meant better services for patients, more staff, more resources–and a much stronger union.”

‘This hospital is occupied’

Candy Unwin recalls a fight in the 1970s to stop closures

In 1976 around 100 small hospitals were threatened with closure in London. I became secretary of the campaign to defend Elizabeth Garrett Anderson Hospital on Euston Road. It involved health workers and other trade unionists as well as pensioners, tenants and women’s groups.

A “work-in” began in November 1976. People still worked but they controlled their work, not managers. We had a 24-hour picket and took over a small waiting room where we kept the picketing rota. We met weekly.

Cleaners and catering workers persuaded doctors to back the work-in. Doctors continued to treat patients and pledged that they wouldn’t allow the health authority to run down the hospital by removing equipment and patients.

We held demos and occupied health authority meetings. We hung banners outside the building reading “this hospital is occupied” and “this hospital is under workers” control. We drew up a manifesto and wrote a pamphlet about why the hospitals should be kept open.

The campaign succeeded in stopping the hospital’s closure—although it was eventually shut down by New Labour in 2008.

One of the women workers involved said at the time, “I was against the occupation and work-in because I thought we would just sit in and not do anything.

“But then it was all explained about how staff would continue to look after patients. Since then I’ve done things that I’ve never done in my life.”

‘Wards were under the control of workers’

Most workers at London’s University College Hospital (UCH) weren’t in a union in 1992. Few there had any experience of trade union activity—but they also had no experience of defeat.

Suddenly ward closures were announced with no consultation. Nurses refused to leave the wards while porters refused to move patients. Some of us nurses called a meeting. Over 150 turned up. They were very angry and wanted to strike.

At the meeting we argued for a three-day strike with emergency cover. But many people wanted to strike indefinitely without cover, saying management could sort it out for themselves!

We talked to senior nursing and medical staff who agreed that we would stay on the ward and continue to deliver care. We also talked to the patients and their families—and patients agreed that they didn’t want to be moved from the ward.

We organised groups of workers to visit dole offices, post offices and fire stations. Workplaces adopted wards and collected hundreds of pounds. Nurses were radicalised when they saw the support they had.

We held a rally and an illegal march down Oxford Street. We stood on the roofs of cars outside Middlesex Hospital calling on the workers to come out in solidarity with us—they struck for one day.

We even managed to get access to the hospital flagpole and flew our Unison union flag for two days. Everyone was wearing badges saying “support the strike” or “emergency cover”.

Management threatened consultants and senior medical staff who moved patients onto the occupied surgical ward. But they did it anyway.

The ward closures were reversed after six days. We’d recruited over 90 percent of the staff into the union but then we heard about a consultant being victimised.

We said we weren’t going back until management dropped the disciplinary. We stayed out one more day—then management gave up. 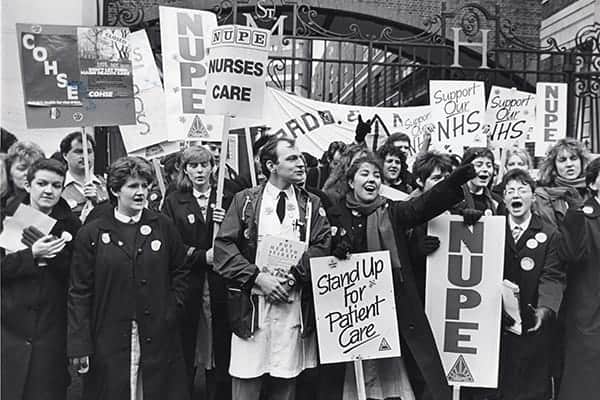 Remembering the nurses’ strike of 1988