This article is over 19 years, 11 months old
\"There is no longer a case of a winter beds crisis-there is a total beds crisis all the time.\" That was the reaction of a worker at the Whittington Hospital in north London after the furore that erupted over the treatment of 94 year old Rose Addis. Rose's family complained that she was left unwashed for three days in the hospital's casualty department.
Downloading PDF. Please wait...
Saturday 02 February 2002

‘There is no longer a case of a winter beds crisis-there is a total beds crisis all the time.’ That was the reaction of a worker at the Whittington Hospital in north London after the furore that erupted over the treatment of 94 year old Rose Addis. Rose’s family complained that she was left unwashed for three days in the hospital’s casualty department.

The Tories cynically seized on the case to condemn New Labour over the state of the NHS. Tory leader Iain Duncan Smith is desperate to drag his party out of the political wilderness. But the Tories have no credibility posing as the defenders of NHS users and staff.

Their governments destroyed the NHS. They introduced the internal market and trusts that broke up the health service and brought competition into healthcare. Now the Tories want to get rid of the NHS altogether and force people to pay for healthcare. There is some confusion about what happened in this particular case.

But what is clear is that every week there are reports from every area of the country of people suffering because of long waits in casualty due to staff and bed shortages. New Labour has not only prolonged the crisis in the NHS but has made it even worse.

The lack of funding has had a massive impact on staff at London’s Whittington Hospital. A report by the government backed organisation the Commission for Health Improvement came just days before the hospital horror stories hit the headlines. The report had ‘major concerns’ about lengthy waiting times in accident and emergency.

Some 40 percent of staff said they intended to leave the hospital within the next year. Almost 15 percent of nursing posts and 30 percent of healthcare assistant posts were vacant.

As the Whittington Hospital worker reports, ‘People often wait between four and ten hours in accident and emergency. There are not enough staff, and patients have to wait too long. Staff are working long shifts, often without a break. Politicians wouldn’t last a morning in that environment. We get a lot of abuse and violence. We often don’t have the time, so when patients are seen perhaps they don’t get all the care they need because we are seeing so many patients. Management are keen for people to deliver on the government’s targets, but then the resources are not put in. Blair says to staff, ‘We support you 100 percent.’ If the NHS is so good, why is the government handing it over to private companies? They can’t run the railways. Why should they be able to run hospitals?’

‘A CATASTROPHE waiting to happen.’ That is how two surgeons at the Kent and Canterbury Hospital this week described the state of the hospital’s accident and emergency department. The surgeons, Richard Collins and Bob Heddle, said the ‘dreadful’ conditions had reduced some of the nurses to tears:

‘This week we have had up to 40 people on trolleys for up to two days, including one 83 year old with stomach pains for 36 hours, and a 93 year old for 36 hours, ill with gallstones.’ In Scotland three of the busiest accident and emergency departments will share a single on call consultant under a cost-cutting plan. This will have a massive impact on healthcare across the Hairmyres, Monklands and Wishaw hospitals, which treat 160,000 patients a year.

There are currently three consultants. This will be reduced to one, who will be reached by phone between 5pm and 9am and at weekends to deal with emergencies in all three casualty departments. The hospitals’ daily workload is the equivalent of 440 patients a day. Senior doctors in all three hospitals have condemned the plan as ‘clinically unsafe’.

Why is France better?

Blair admitted last week that France and other European countries had more doctors and shorter waiting lists because ‘they spend more public money than we do’.

In France public funding for health is 7.1 percent of the country’s wealth compared to just 5.7 percent in Britain. This is because French workers staged massive strikes and demonstrated in 1995 against the then Tory government’s attacks on the whole welfare system. The workers’ revolt succeeded in breaking those attacks.

Since then the workers have kept up that fight, even under the government now led by the Socialist Party, which is equivalent to New Labour. That is an example for health workers and service users in Britain.

NEW LABOUR health secretary Alan Milburn admits that the NHS ‘has got problems’. He outlined the government’s plans for the health service last week as ‘putting in sustained investment over a period of years’ and ‘fundamental reforms’. The problem is that ‘sustained investment’ is not money raised from the most lucrative source-raising taxes on the rich.

Instead New Labour is pushing ahead with deals with private companies to run parts of the NHS. These companies are ‘investing’ to make a profit, not to run a service that puts the needs of patients first. The Whittington Hospital, for example, is part of a £30 million redevelopment plan.

But this is coming from a Private Finance Initiative scheme. The giant construction company Jarvis won the deal last November. It will get guaranteed funding from the hospital’s budget over the 30-year lease. The firm has no experience in providing healthcare. PFI schemes mean some 28 percent of staff and 25 percent of beds are cut, according to repeated investigations by unions like the GMB and Unison, and the doctors’ BMA organisation.

New Labour’s underfunding has meant up to half a million NHS patients have missed out on operations since Labour got into government in 1997. The ‘fundamental reforms’ that New Labour plans for the NHS are not about tackling the problems.

Milburn has introduced targets, but without increasing the amount of money and staff needed to meet them. For example, he says no patient should wait longer than four hours in casualty. But the British Association of Accident and Emergency Medicine says there is ‘no question’ of the targets being met without hundreds more specialist doctors.

The organisation claims that managers have even resorted to redesignating corridors as ‘wards’ to pretend that patients have been admitted to proper beds within the target time. New Labour’s ‘reforms’ also mean attacks on workers’ pay and conditions through ‘flexible working’ and private firms taking over as their employers. Blair enraged public sector workers in 1998 by moaning that he had ‘scars on his back’ from trying to force through reform of public services. He was forced to use a more conciliatory tone in his speech in Newcastle last week when he praised health workers. But he still called for more ‘reforms’.

That means already overworked staff being forced to cope with more ‘initiatives’ and ‘targets’ while the government refuses to increase funding. 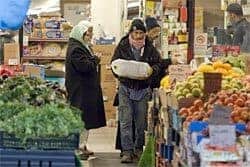 Luton: the myth of a town divided 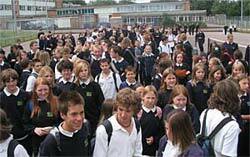 School students walk out against war and poverty 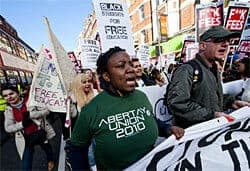