Rebellion in the heart of empire

This article is over 19 years, 7 months old
MAINSTREAM historians argue that the British working class has always accepted capitalism, and prefers family life to fighting back. This is one of the themes running through Simon Schama's History of Britain, currently being shown on TV. The Great Unrest gives the lie to these claims.
By Matthew Cookson
Downloading PDF. Please wait...
Saturday 15 June 2002

MAINSTREAM historians argue that the British working class has always accepted capitalism, and prefers family life to fighting back. This is one of the themes running through Simon Schama’s History of Britain, currently being shown on TV. The Great Unrest gives the lie to these claims.

From 1910 to 1914 Britain was in a near constant state of rebellion. There was a revolt by women for the vote, by the Irish for independence and, above all, by workers.

During these years of rebellion many workers wanted to go far beyond the politics offered by the Labour Party and the union leaders. They wanted to bring about fundamental change through taking strike action. Around 1.2 million people struck in 1912 alone-three times the number of people striking between 1895 and 1909.

When their revolt began in 1910, Britain was at the height of its imperial power. The British Empire spanned the globe, through Africa from Cairo to the Cape, and across the Indian subcontinent. Profits were increasing, and newspapers were full of stories about the extravagant spending of the wealthy. Since the last big upturn in workers’ struggle from 1888 to 1892 workers had been defeated in a series of major confrontations.

But huge pools of bitterness existed among working people. Prices and rents increased, but average real wages fell by around 10 percent between 1900 and 1912. Radical voices were beginning to gain a hearing from growing numbers of workers. The most important of these groups was the revolutionary syndicalists. They believed that the power of workers mobilised in a general strike could overthrow capitalism.

The leaders of the newly formed Labour Party restricted their activities to trying to influence the Liberal government. Lloyd George, the leading Liberal politician, even talked of how Labour politicians were a bulwark against the syndicalists.

THE FIRST major sign of the Great Unrest broke out among miners in South Wales in September 1910. Over 300,000 miners went out on strike to defend their living standards in the teeth of opposition from their union leaders The union leaders wanted conciliation with the bosses, but a significant minority of miners refused to give in.

They organised mass picketing, attacks on strikebreakers and sabotage of the pits, and battled with the police who defended the mines. The police killed a striker during riots in the main square of Tonypandy, and many more were injured. The miners became more militant as the strike went on. ‘Put an end to capitalist despotism and do battle for the cause of industrial freedom,’ said one strike committee leaflet in June 1911.

The miners were forced back to work in August that year, having won nothing. But this defeat was only the beginning of a wave of militant strikes that would shake the government and the employers to the core. The national seamen’s union planned a strike for June 1911 to force the bosses to recognise the union. Seamen in Southampton refused to wait-they struck six days before the strike was due to take place.

This unofficial action quickly spread to other cities, and to other groups of workers who put forward their own demands. ‘The union leaders have little control and are now frightened,’ said George Askwith of the Board of Trade.

When union leaders read out a proposed settlement to 15,000 workers in Hull, ‘An angry roar of ‘No!’ rang out-and ‘Let’s fire the docks’.’ Thousands of railwaymen in Merseyside were inspired by the dockers’ example. They struck unofficially for higher wages and an end to no-strike deals. The Liverpool strike committee, set up during the seamen’s strike, called for solidarity strikes-thousands of workers responded.

Just five days after the strike began 15,000 railwaymen, and 8,000 dockers and carters were on strike. When the ship owners imposed a general lockout the number on strike rose to 70,000. The strike had a huge impact. It undermined the traditional divisions between Catholics and Protestants in the city as they marched and struck together. The government and the employers were really worried by the workers’ movement. SOME 3,000 troops and several hundred police were sent to Liverpool to protect the bosses and scabs. Gunboats were sent down the Mersey.

Police and troops attacked a peaceful demonstration of 80,000 people on 13 August-dubbed ‘Bloody Sunday’. Troops shot two strikers dead two days later. This strike movement showed both spontaneous solidarity of workers and concrete syndicalist arguments about the need to build action across industry. The centre of the strike wave returned to the mines in March 1912.

Miners voted in favour of a national strike for a minimum wage, and the strike was massively successful. The national union leaders pushed for the workers to accept a deal that recognised the principle of a minimum wage but fell short of setting a rate. They overturned the miners’ decision to fight on and pushed them back to work. But the militancy continued to grow across the working class.

Strikers clashed with scabs and police on numerous occasions. There were numerous gunfights between the groups. ‘If the capitalists and the government say we should not have the right to live, then we must take power into our own hands,’ said dockers’ leader Ben Tillett. ‘We must use other power-the means we have to use are violence and physical power.’

Other cities saw huge workers’ movements. Dublin in 1913 was still part of Britain. The syndicalist leader James Larkin led a strike that paralysed the city. The authorities arrested 656 workers and killed five strikers.

The Dublin lockout was a magnificent struggle. It was only defeated when British trade union leaders stabbed the Dublin workers in the back by not supporting their struggle. The strike wave inspired many other groups to take action-including semi-skilled and unskilled engineering workers, building workers, agricultural labourers and municipal employees.

It affected wider layers of society. A rash of school student strikes broke out in working class areas in 1911. It also inspired women workers-in Bermonsey, south London, 15,000 women who worked in the sweated trade industry struck in 1911. Women played a prominent role in the Black Country strike of engineering workers in 1913 over a minimum wage and union recognition.

The dispute involved around 40,000 workers. Strikers marched from one factory to the next bringing out new waves of other workers. The Great Unrest brought rank and file workers into conflict with their union leaders and Labour. It involved millions of people in activity, picketing, demonstrating, collecting, and it stirred wider sections of society.

Union membership leapt from 2,477,000 at the end of 1909 to 4,135,000 at the end of 1913. Even the royal family got a taste of the workers’ medicine. Some 40,000 building workers locked out of work in 1914 staged a mass picket and disrupted the Princess Royal laying the foundation of Marylebone Town Hall. They sang the Red Flag and the Marseillaise, followed by three cheers for the social revolution and three boos for royalty and blacklegs.

Most significantly, the unrest grew among railway workers and miners. On the second anniversary of the railway strike in 1913 some 20,000 railway workers in London went to an unofficial rally to hear calls for a minimum wage and an eight-hour day.

A Triple Alliance of railway workers, miners and transport workers drew the three most militant workforces together. ‘Within a short space of time there may be movements in this country coming to a head of which recent events have been a small foreshadowing,’ wrote George Askwith. But all the promise of the militancy of the previous four years was dashed by the outbreak of the First World War in July 1914. Union leaders who had led militant struggles completely caved in to the war drive.

Respected leaders like Ben Tillett actively supported the war effort. The workers’ movement was confused and disorientated. Union leaders called off strikes as they joined together with the bosses and the government. There was a huge pressure to fall in behind the war effort but, despite this, the movement was only temporarily halted.

In 1916 a new wave of industrial unrest and political opposition developed. Fed by the example of the Russian Revolution of 1917 and growing anger against the effects of war, the militancy erupted across Britain in 1919. It would eventually lead to the biggest general strike in British history in 1926. 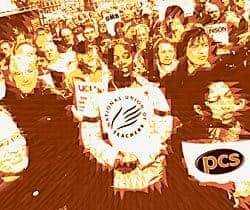 All aboard for 24 April strikes and protests