This article is over 10 years, 3 months old
Below is an extract from Esther Brunstein’s speech at an Anti Nazi League meeting at the National Union of Teachers conference in 1992
Downloading PDF. Please wait...
Tuesday 07 February 2012

“I have a mission to bear witness. Not a single day or night has passed without me being drawn back into the past and reliving the pain and trauma.

To quote a Yiddish poet, ‘I have not yet returned from the longest funeral procession.’

My own story starts in Lodz, the town with the second largest Jewish population in Poland.

I came from a Bundist background and I am forever grateful for having had an education in a Jewish secular school. From the very beginning it imbued me with a love of humanity at large as well as with pride and love for the Jewish people.

After the Nazi invasion, about 180,000 men women children were pushed into the Lodz Ghetto.

Starvation, disease and deportation soon claimed the lives of my very dear ones—my aunts, my uncles, my cousins, my school friends.

Yet we tried to hold on to some semblance of human dignity. Schools re-opened for a while. Political parties functioned. Choirs were formed. Lectures were given.

1942 was the darkest time, because deportation then was on a mass scale. I think about 20,000 were deported in that year alone.

We didn’t know then that they were taken to the Chelmno extermination camp.

Anyone who has seen the film Shoah knows what happened in Chelmno. This was death in the trucks.

By 1944 our ghetto had served its purpose. It was disbanded, and then we were taken and herded into cattle trucks. I cannot remember whether it was 12, 24, 36 or 48 hours.

Think about 50 people in one cattle truck, without any window, without any food, with just two buckets placed in the middle—one with water and the other for our bodily needs.

But we still didn’t know that our destination was Auschwitz.

We were formed in lines and pushed, pushed, pushed towards the ‘Selection’. My mother, who was only 44, did not pass ‘selection for life’.

I was chosen for a labour camp. We were marched on foot—not knowing that the destination was going to be Bergen Belsen.

I cannot remember the liberation of Belsen on 15 April 1945, because I had typhus and had been given up for dead.

When I regained consciousness about four days later, the three women next to me on the bunk were dead.

So were most of my friends. They were thrown just outside onto the heap of corpses.

Next to me I found pieces of bread. Believe me hunger, does not ennoble anybody.

It demoralises. It’s a very nasty beast that makes you think about nothing else but how to satisfy it.

And I looked at the bread and I could not eat a crumb. I was too ill. To this day I feel I was cheated.

I was praying. I didn’t know to whom to pray, but I have never prayed so fervently in my life. There was murder in all of us who survived. I wasn’t yet 17.

‘Please let this not ruin me for the rest of my life. Let me not be consumed with hatred, because if it were so then my survival would have been in vain.’

I have managed I think, against all the odds, to succeed—but not without scars.

And I still feel so strongly to identify with everybody.” 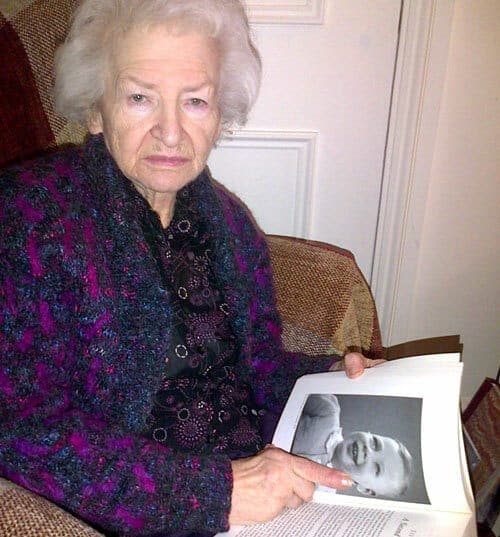 Witnesses to the abyss with the strength and courage to resist