Revolt of the new working class

This article is over 17 years, 4 months old
In 1934 a strike by truck drivers and other workers in Minneapolis in the US became an inspiring example to the whole working class movement
By Helen Shooter
Downloading PDF. Please wait...
Saturday 21 August 2004

A GROUP of workers, sick of working 60 hours a week, go on strike over union rights and become an inspiration to other workers. That was what truck drivers in Minneapolis in the US Midwest did in 1934.

Their victory, 70 years ago this week, played a key role in reducing the working week, and getting job safety regulation and union rights for all workers.

It opened up a new page in US labour history and brought a message of explosive hope just a few years after 18 million workers had been thrown out of work following the Wall Street Crash.

The truck drivers, members of the Teamsters’ union, did not have a strong history of union organisation and militancy.

One of the strike leaders, Farrell Dobbs, recalled that before the strike started “not a single Teamster strike had won in the city for 20 years.”

In the autumn of 1933 there were just 75 members of the Teamsters’ Local 574 branch in Minneapolis.

But a union drive, and the first of three successful strikes involving Teamster members in 1934, meant that by April there were 3,000 members.

This had increased to some 7,000 members when the key battle began in July.

Several of the strike leaders were young, like 27 year old Farrell Dobbs. They were angry at the union leadership’s refusal to fight over conditions in the trucking industry and at union sweetheart deals that restricted workers’ rights.

The strikes mobilised people who had not previously been regarded as central to unions—immigrants and women.

Dobbs described how “waves of immigrants arrived in the region from the late 19th century on.

“They came mainly from Norway, Sweden, Germany, Finland and Denmark. Lured by the prospect of cheap homesteading land, most came with the hope of making a better life for themselves.”

Many found their hopes dashed and headed to Minneapolis looking for work: “Some decided to settle down in the city where in time they were joined by thousands of other immigrants who had been forced off their small farms.”

The 1934 strikes’ success in organising these workers meant there was a powerful united force against the truck industry bosses and to challenge racism.

One of the leading strikers was Carl “Skogie” Skoglund, a Swedish immigrant who had arrived in the US as an illegal immigrant 23 years earlier.

A Sioux Indian, Ray Rainbolt, was a leading activist in the strike at a time when racist ideas about Native Americans were common.

Rainbolt was so respected by his fellow workers that he was eventually elected as commander of the 600-strong Defence Guard, a key post.

In Minneapolis the unemployed, together with their families, amounted to almost a third of the population.

The industry bosses constantly preyed on truckers’ fear that, if they fought for decent pay and conditions, they would be replaced by unemployed workers.

The strikers successfully appealed to the unemployed workers to join the pickets and protests, undermining the bosses’ attempts to organise scabbing.

When the May strike started women were already organised to build support. They became the backbone of the strikes.

Marvel Scholl, who was married to Farrell Dobbs, and another striker’s wife, Clara Dunne, set up the “women’s auxiliary”. They argued that women could do more than offer passive support to the strikers.

This included the strike committee’s office, the 24-hour kitchen providing food that served up to 5,000 people a day, and the strikers’ makeshift hospital used to treat pickets wounded by police and bosses’ hired thugs.

The women’s auxiliary also organised protests and demonstrations, and went round other unions to raise solidarity donations.

The women, along with the strikers, learned through their own experience about how the state organised to try to defeat the strikers.

They saw the brutality of the police, and how they protected scabs.

But, as one of the women’s auxiliary members reported on 2 June 1934, the strike organisers’ appeal for women’s active involvement in the strike “met with a response they had not dreamed of.

“Women came to strike headquarters ready and willing to do any kind of work assigned them.

“Women pickets took up the cause on the line of battle. Three of our women were seriously injured in riots with police.

“The necessity of feeding the families of the men on strike until they would again be able to draw wages was brought home to us very forcibly during the last few days.

“The newspapers of Minneapolis were muzzled to such an extent that no news in favour of the strikers was ever published.

“To attempt to counteract this state of affairs the women organised a mass demonstration.

“Led first by four women carrying our banner, followed by about 500 women, many of them sympathisers, we broke every traffic rule in Minneapolis.

“Crowds gathered along the sidewalk and followed the procession to the courthouse. We marched straight to the mayor’s office.

“The mayor wasn’t in. The committee decided to wait. The women, quiet and orderly during the whole proceedings, suddenly were infuriated by something.

“Inquiry disclosed that the chief of police had thought it smart to parade a batch of his special deputies down the same corridor the women were waiting in.

“Only quick thinking on the part of the committee saved those deputies from being very badly hurt.

“The mayor’s secretary arrived in surprisingly short time. The women got just what they expected—nothing.

“The committee then left. The crowd was addressed by Frieda Charles, and dispersed in an orderly fashion.

“The women’s place is right alongside of the men, shoulder to the wheel, fighting for their birthright.

“The Women’s Auxiliary of General Drivers’ Union No 574 has set an example which we hope will be followed by the working class women throughout the nation.”

It was important that a group of revolutionary socialists, people in the Trotskyist tradition, were at the centre of the strike. They brought an emphasis on workers’ self activity, democratic decision making, and the full participation of all workers.

They argued the strike would not win if they simply waited for orders from the union leadership.

So the strikers elected their own strike committee and held regular mass meetings to involve everyone.

They also published a daily paper to put the strikers’ case, producing up to 10,000 copies.

The bosses were determined to break this unity. On “bloody Friday” in July 1934 the police opened fire on a truck carrying pickets. They shot to kill.

Some 67 people were wounded. Many were shot in the back as they tried to flee. Two strikers died of their injuries.

The state governor even resorted to declaring a “state of insurrection”.

He brought in troops, and had the strike leaders arrested.

But even such repression could not beat the strikers.

The governor was forced to release the strike leaders and a federal negotiator was rushed in to make a deal.

The strikers’ paper was able to run the headline “Victory!” on its front page on 22 August after the strikers’ demands over pay and union rights were met.

The strike marked a turning point in workers’ confidence to organise and fight.

Coming at the same time as successful struggles to unionise the car plants in Toledo and the San Francisco docks, it signalled a change in the fortunes of US workers.

Two years later a wave of struggles erupted. Out of these a new trade union federation, the Congress of Industrial Operatives, was launched.

It saw the need to recruit among the unorganised in new industries like the car plants—and then to take militant action.

The Teamsters’ example was echoing wider.

Teamster Rebellion, Farrell Dobbs’s account of the strike, is available from Bookmarks (£13). Phone 020 7637 1848 or go to Bookmarks online 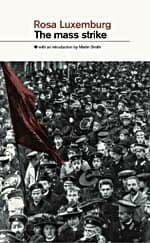