This article is over 10 years, 4 months old
Colin Barker looks at what makes a revolutionary situation—those moments in history when everything seems possible—and what shapes their outcome
Downloading PDF. Please wait...
Tuesday 30 August 2011

The Russian revolutionary Lenin wrote that revolutions become possible when two conditions meet and clash. Is it when the exploiters can no longer rule in the old way, and that “the lower classes do not want to live in the old way”.

First, the government loses control of part of its normal apparatus of rule to a challenging force.

Second, a significant part of the population backs the challengers’ claims. Third, the government is not able to repress the challengers and their supporters. In short, there is a first-rate political crisis—and a struggle between rival forces to resolve it.

While these conditions last, so does the revolutionary situation. It ends when some force succeeds in re-establishing a single political power centre.

This sparse definition covers many situations with very different potential outcomes. Some contain real possibilities for socialists, others less so.

Most military coups, for example, involve brief revolutionary situations, but most don’t offer a suitable terrain for the left.

Even here there are exceptions. The threat of a coup by General Kornilov in the summer of 1917 swung the Russian Revolution to the left and strengthened the Bolsheviks.

And, occasionally, coups can initiate something more. April 1974 saw a military conspiracy overthrow the old fascist regime in Portugal, initiating a revolutionary situation that lasted for 18 months.

There are some forms of revolutionary situation where the mass of the population is excluded from participation, and not by the military.

The end of fascism in Spain in 1976-78 was accomplished by a “pact” that included the leaders of the Socialist and Communist parties, whose purpose was to limit radical challenges.

In major Latin American countries in the 1980s, military dictatorships also ended in similar ways. The pacts included agreements that former murderers and torturers would not be prosecuted.

In 1989 in Poland and Hungary, “communist” regimes were ended by “roundtable” agreements between former oppositionists and leaders of the Communist Party. There were few strikes and demonstrations.

One writer derided the revolution that brought parliamentary democracy to Hungary as a “media event”. The new regimes rapidly introduced neoliberal market reforms and privatisation, with many former Communist Party functionaries re-emerging as rich private capitalists.

In South Africa, despite the immense struggles against apartheid, the African National Congress (ANC) made a pact with the old white rulers, preserving their privileges and forgiving their crimes.

These revolutions were “deflected” away from popular involvement—by liberal, socialist and communist party leaders, middle class oppositionists, churchmen and others. There were revolutions, but they were limited to “political revolutions”, where the class structures of the old societies remained essentially intact.

The possibility of social revolution, in which the class structure of society is dramatically altered, seemed distant.

Even in East Germany and Czechoslovakia in 1989, where mass demonstrations brought down the regimes, there was little independent working class activity and

organisation. Millions of workers believed that the introduction of the market would bring them the freedom they demanded. Socialism had become a dirty word.

Now, after more than two decades of practical experience of neoliberalism, and with global capitalism locked in crisis, new revolutionary situations are already exploding. The illusions of the past are breaking, and exciting new possibilities are emerging.

The path from a revolutionary situation to its outcome is never straightforward. There are leaps and reverses, advances and retreats. This is especially true when millions of ordinary people are drawn into making history for the first time.

Such phases are often drawn out, giving some breathing space for working people to develop new ideas, new forms of organisation, and new hopes.

As in Tahrir Square in Cairo in February, a popular revolution often begins with a deep sense of unity among the participants. That was also true in the past.

The revolutionary Karl Marx called the February revolution in France in 1848 the “Beautiful Revolution”. April 1974 in Portugal was “The Revolution of Flowers”.

But the unity of the first stage cannot last. The underlying causes of the popular uprising soon impose themselves on people’s minds.

In Egypt today, the capitalists, liberals and the leadership of the Muslim Brotherhood want the insurgency to end, to go back to “business as usual”.

But for the mass of the people, there is still high unemployment, rocketing food prices, poverty wages, and the tyranny of the boss.

The majority can celebrate the opening of a revolutionary situation, and yet feel disappointed that not much has changed.

They have begun to feel their collective power for the first time, but are not sure yet what it could achieve. In Trotsky’s phrase, the young bones of the revolution are still soft.

Revolutions begin with minorities. In 1917, the population of Petrograd overthrew the Tsar, but most of Russia was not yet directly involved. In Egypt, one estimate is that 25 percent of the population participated in the overthrow of Hosni Mubarak. That’s a big minority, but still a minority.

Egypt’s revolution began in the bigger cities, but still had to reach out to the smaller towns and to the countryside. A revolutionary situation can widen and deepen as larger layers of the population begin to develop and fight for their own demands.

One vital route is via the expansion of economic demands.

A revolution can open up the whole of social life to political questioning and struggle. The great revolutionary Rosa Luxemburg stressed the significance of the inter-weaving of political and economic demands, and how they reinforce each other.

The spread of strikes, land occupations and the like are signs of the deepening of the revolutionary process, she said. They offer ways for new layers of people to begin organising and expanding their self-confidence.

A new government, following the overthrow of an old one, must at least pay lip service to the idea that the past was bad.

In Egypt, the new government has to distance itself from Mubarak. But what about all the “little Mubaraks” in the army, in the big corporations, in the workplaces, and in the state?

They were tied with golden chains to the old ruler. Why not get rid of them too? In Portugal, this process was called “Saneamento”, or cleaning up.

The fight to sack corrupt and bullying rulers and local managers can deepen the revolutionary process, raise workers’ confidence—and reduce that of the bosses. The subtle balance of joy and fear between the classes can alter.

In a revolutionary situation, learning processes speed up. What took decades under “normal” conditions now takes weeks, or even days.

Ordinary people learn to judge situations, to measure the weaknesses as well as the strengths of their opponents, and to measure their own collective power in new ways.

Nothing is learned all at once. Trotsky remarks that mass movements learn “by the method of successive approximation”. They try out different solutions and test out various allies and spokespeople. In the process, they themselves change.

As part of a mass movement, workers gain a new, self-empowering sense of themselves as possible agents of social transformation and liberation—both collectively and individually. Working people “feel better”. It’s the bosses who worry themselves sick.

To discover whether we are moving toward a social revolution we must ask, are workers developing new institutions from below—factory and neighbourhood committees, independent unions, clubs, associations, assemblies? In short, are new instruments of popular power developing?

Are old differences of status and privilege breaking down, as in the Cairo hospital where doctors, nurses and porters formed a common organisation?

This is crucial because, if they start to link together, these organisations can be the foundations of a new kind of state power.

In every mass movement, there are always voices sounding caution. “Don’t go too far!” they urge.

Mass movements generate their own conservative layers. There are ongoing arguments within them about whether it’s better to compromise—to deflect the revolution into “pacts” with former rulers.

The arguments are inevitable. What matters is whether the left also

Can the left show a way forward through the many twists and turns of an evolving, always shifting, battle of ideas and activity?

There are no guarantees that a revolutionary situation will end in a successful revolution. Our history is littered with defeats. The ruling class, nationally and internationally, is always probing for weaknesses in our side, seeking collaborators, trying to turn the tide its way.

The question of questions is, can working people establish their own power—or must we retreat once more, only to begin the struggle again?

Colin Barker is an editor of Leadership and Social Movements, published by Manchester University Press 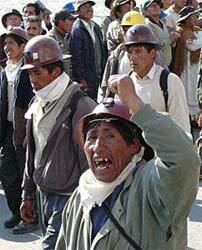 Revolution lives on in the 21st century

Shut out of the Thames Gateway