Rose Gentle is standing to make the war an election issue

This article is over 17 years, 2 months old
Rose Gentle, the mother of Gordon Gentle, a British soldier killed in Iraq in June last year, announced this week that she is standing against Adam Ingram, the armed forces minister, in the general election.
Downloading PDF. Please wait...
Saturday 09 April 2005

Rose Gentle, the mother of Gordon Gentle, a British soldier killed in Iraq in June last year, announced this week that she is standing against Adam Ingram, the armed forces minister, in the general election.

Rose is standing in the East Kilbride constituency. The Scottish Socialist Party has stood down. Campaigners are asking other parties to stand down as well.

Rose told Socialist Worker, “I am standing in this election because the government is not listening to us over Iraq.

“I still think that the war was based on lies and that British troops should be brought out of Iraq. Now is the time to do that. If Blair is so confident about the issues why doesn’t he publish the attorney general’s advice on going to war?

“I want to make Iraq an issue in this election. The government wants to try to put it under the carpet. I have chosen to stand in East Kilbride because Adam Ingram has not given a damn about anybody. He’s still sending troops out to Iraq. He doesn’t care.

“There should be a programme to help those who come back with mental and physical problems. The more of Adam Ingram’s votes that I take away the better. We have to fling some of the responsibility for this war at British ministers and make them listen.”

Rose adds, “I don’t want any more mothers in Britain or Iraq to lose their sons for Tony Blair’s lies. Already, over 100,000 Iraqis and over 1,600 US and British troops are dead. How can we stand by while more are killed or maimed in a war opposed by the majority of the British people?

“I want to give a voice to all those who want to end this war. We need policies which can offer hope for the future. Many people feel betrayed.

“I believe the billions of pounds wasted on this criminal war would be better spent on providing good pensions for our elderly and decent jobs for our youngsters.

“Adam Ingram and all those MPs who voted for war in the House of Commons share the blame for the death of Gordon and all the other victims of Bush and Blair’s war for oil.

“I am asking the people of East Kilbride to support military families speaking out against this war. I call on all those who oppose this war to unite behind me in sending a clear message to Tony Blair — end the occupation of Iraq and bring the troops home now.”

Tell the prisoners they aren’t alone 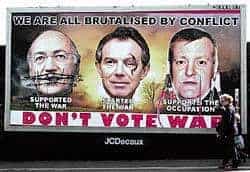