Sandblast: a culture of struggle

This article is over 16 years, 1 months old
Sandblast is an emerging organisation set up to tackle the severe lack of the awareness of the Saharawi situation in Britain and to build links between the UK and Western Sahara through the arts.
By RuRussell
Downloading PDF. Please wait...
Saturday 26 November 2005

Sandblast is an emerging organisation set up to tackle the severe lack of the awareness of the Saharawi situation in Britain and to build links between the UK and Western Sahara through the arts.

Sandblast is committed to the idea that positive action can generate awareness and support and that a commitment to non-violence should not be rewarded with indifference.

One of the striking things about the Saharawi struggle and life in the refugee camps is the prominent role of the arts. Historically, oral traditions, and particularly poetry, were the most distinct means of transmitting culture and historical memory during centuries of pastoral nomadic life.

They reaffirmed a distinct Saharawi cultural identity derived from Berber, African and Arab-Islamic roots, which was expressed in Hassaniya, an unwritten Arabic dialect.

With the rise of the Saharawi anti-colonial movement these art forms were harnessed to mobilise the still largely illiterate masses. Many Saharawis today will recount how they were moved by the power of one song or poem to join the Polisario Front.

Today, traditional art forms are practised alongside painting, photography, theatre and film. A new generation of artists continues to explore their cultural identity and use their creativity as a form of protest.

This is particularly important when you consider that in the occupied territories a programme of “Moroccanisation” aims to suppress Saharawi culture and to undermine the concept that they are a distinct ethnic and cultural group.

In October 2006 Sandblast will launch its work by hosting a group of around 20 Saharawi artists on a cultural convoy from the Saharan camps.

They will include Tires, a ten-piece music and dance group featuring the outstanding voices of Shut, known locally as the Aretha Franklin of the Sahara who has sung for the struggle for many years, Muffed, a rising young star of phenomenal talent, and Belch, a 72-year old musician, dancer and puppeteer who embodies the nomadic life and traditions of the Saharawi.

For the first time a British audience will have the chance to experience the unique sights and sounds of Saharawi music, dance, theatre, poetry, fine arts and photography at a series of events across London and other destinations.

There will also be seminars, lectures and workshops. For those introduced to the Saharawi cause for the first time, an understanding of the injustice of their situation will be set in the context of their rich culture, creativity and resilience.

For more info go to www.sandblast-arts.org or e-mail [email protected] to be kept up to date on Sandblast’s program of events. 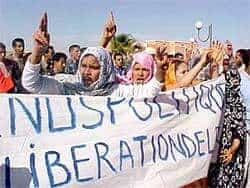 Sidi Omar of Polisario interviewed about the struggle in Western Sahara