Scared, scarred and starved in Calais – the refugees locked out by Britain’s borders 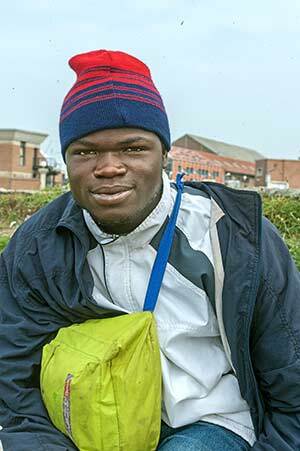 A humanitarian crisis is unfolding in the northern French port of Calais, as it is rapidly becoming an outpost of Britain’s border controls. 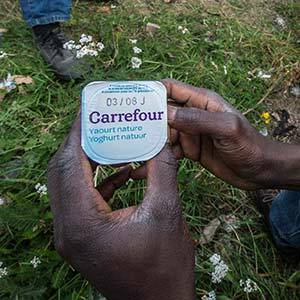 Refugees from poor and wartorn countries risk life and limb to get past the fences and onto the lorries that could get them into Britain, where they hope to claim asylum. 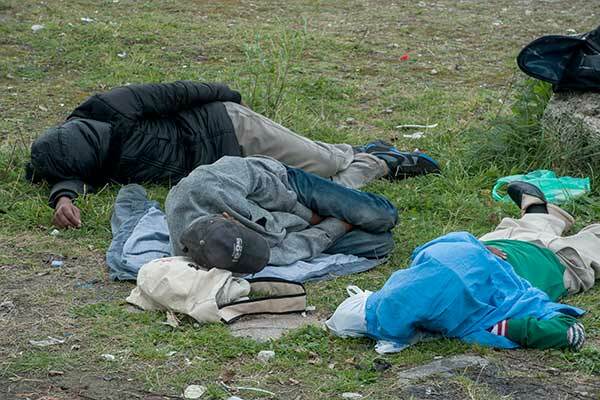 Men and women sleep out on the quayside during the day (Pic: Guy Smallman)

The British government is determined to keep them out. Its latest plan is to export the security fence used at the Nato summit in Newport to surround the port. 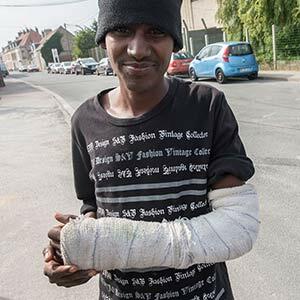 Saleh’s arm was broken by the police (Pic: Guy Smallman)

The government wants to convince ordinary people that migrants are to blame for falling living standards. 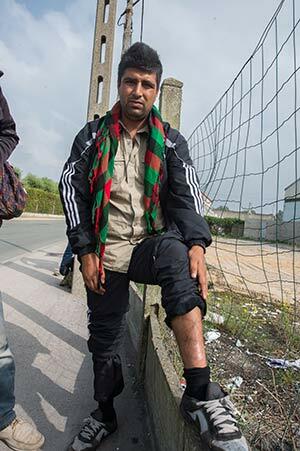 Najif’s legs were injured by the Taliban (Pic: Guy Smallman)

But it is not migrants from Europe or elsewhere that are responsible. These desperate people are not trying to get to Britain to live on welfare. 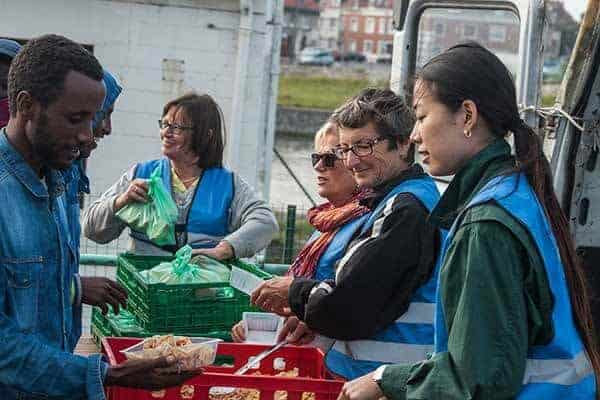 Almost all come to Britain to work and so create wealth (see below). 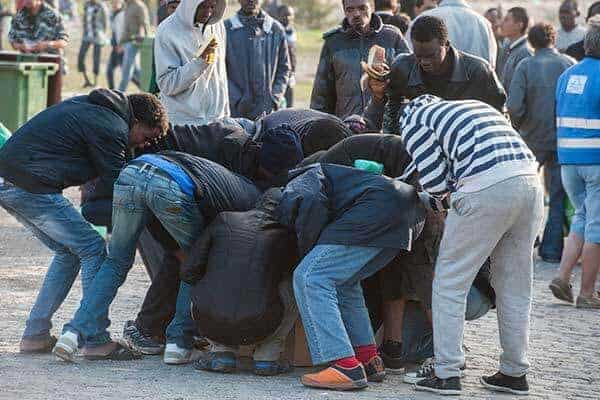 Some gather leftovers to take back to their camp (Pic: Guy Smallman)

They have been coming to Calais for 15 years. But almost every year brings more fences and fewer shelters. 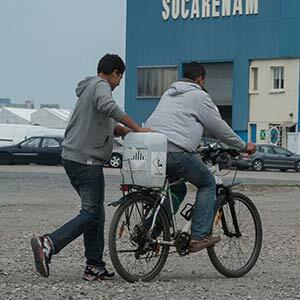 Most of the migrants we met were from Africa. Hassan Ali from Chad told Socialist Worker, “We are hungry all the time”.

He and his friends were eating a pack of yoghurts, even though some of them were six weeks out of date. Most days they eat only once, when local charities give out a basic meal in the evening.

There are no showers for the migrants to use, few water pumps and just three toilets.

They sleep in the open air. Seyobou from Mali has been there for ten months. “It’s very cold here,” he told Socialist Worker. “The winter was very difficult.”

No one knows quite how many refugees are there, though it could be as many as 2,000 spread between Calais and its neighbouring towns.

Around 500 people live in just one small wooded area they call the Jungle.

Musa had travelled there from South Sudan, through Libya at the height of its civil war. He pointed out one man with severe mental illness. He said another had been out of contact with his three children for nine years in his attempt to find a better life in Britain. A third man was vomiting, with no hope of seeing a doctor.

Most of the migrants are men in their 20s and 30s, who have the best chance of making the long and perilous journey. But there are also old men and young children, and women of all ages.

“It’s hard being here with a child,” said Salam, who had been in the Jungle for three months with her three year old son. “We don’t get enough to eat, and when he’s sick there are no doctors. We get no help from the authorities. But we have no choice.”

Salam said she had to flee the dictatorial government of Eritrea.

Her husband had fought with rebel forces, and if she stayed she would face arrest and possibly death.

The night before, police had come into the Jungle and pepper-sprayed people in the face. Salam was one of them. Another was Najif, from Helmand in Afghanistan.

His family had been killed by the Taliban. He was severely beaten and told he couldn’t stay.

He told Socialist Worker, “I had to go to Iran, where I was badly treated as an Afghan. So I came to Europe, to apply for asylum in the countries where Nato is based. But everywhere I am told to go away.”

Saleh, an Eritrean boy of 16, was nursing a broken arm. “The police arrested me two weeks ago,” He explained. “They attacked me in the car and hit me with a stick. I had to make my own way to hospital.”

Others described being shocked with electric batons, seeing police set fire to people’s shelters and belongings. They spoke about being forever watched in case they attempt to stowaway on a passing lorry.

Seyobou said the police often stop people to check papers. Those who have not requested asylum in France or in transit countries such as Spain, Italy or Greece can be arrested.

But making an application in one of these countries removes their chance to apply in Britain. They say the rules in Britain are slightly less draconian and many have friends or at least extended family, and there is more chance of finding cash-in-hand work. But to get there means getting onto a lorry without being spotted by the police.

“It’s very dangerous—too dangerous,” said Seyobou. “Sometimes I have made it into lorries, but then they find you and make you get off. Once I got on a lorry I thought was going to England, but it went to Paris and I had to make my way back here.”

Some do make it across. But every day sees dozens walking disappointed back to the Jungle, or limping with injuries from the lorry that got away.

The migrants will do anything to avoid the attentions of the police. But with scarce resources and nowhere to go, people group with others of their own nationality for safety.

A mass brawl broke out between Eritrean and Sudanese people in front of the TV cameras last week. In these circumstances the most remarkable thing is that this kind of thing doesn’t happen more often.

That it doesn’t is testament to the determination and solidarity that even the notorious CRS riot cops haven’t been able to break.

The mayor of Calais is a right wing Tory and the region is fast becoming a heartland for the fascist National Front.

A bunch of Nazis tried to call out the people of the town under the slogan “Save Calais” last week—they only mustered a few hundred.

But there is also solidarity from at least some people in Calais. There are also pro-migrant activists, and several dozen volunteers who work hard to support them.

Benoit works with the charity Auberge des Migrants. It takes turns with another charity, Salam, to feed 700 people every day.

“There isn’t the generalised hostility that the media portray—I’d say about a third of the population support the migrants, and a larger number at least feel sorry for them,” Benoit told Socialist Worker.

“But the hostility is real, both towards the migrants and the people who support them, and there are altercations. People say that they wouldn’t come if we didn’t feed them. I’ve not been attacked physically, but verbally certainly.”

There was outrage last week when a 15 year old volunteer for the moderate pro-migrant organisation Calais Ouverture et Humanite was beaten up while leaving school.

Things haven’t been always this bad. The worse the provision for migrants gets, the greater the visible chaos and poor hygiene for the racists to point to.

And the provision has been getting steadily worse for years.

The Red Cross Sangatte Centre was closed down. Other projects had their funding denied, or facilities targeted by arsonists. Squatted buildings then came to offer the best protection—and the police drove people out.

Bernard, a volunteer from Britain, said, “If this was somewhere else it would be reported in humanitarian terms—about what help people need. If they had fled into Jordan or Lebanon there would be refugee camps to provide for their needs.

“But because they are here, there is only the political question of how to get rid of them. The logic is to make sure they have absolutely nothing in the hope that will stop them coming.

“How are you supposed to explain it to a man who’s too ill to stand up after sleeping out in the rain with nothing to eat?”

The French authorities have done a lot to make life in Calais as bleak as possible. But ultimately this is a problem made in Britain.

“What’s shocking for us is that this border exists at all,” said Christian from Auberge des Migrants. “Perhaps in Britain you think this is normal.

“But in France if you want to go to Germany, Spain or any other country there is nothing like this. People can come and go.”

But in the efforts to chase Ukip votes and stir up racial division in the working class, politicians of all the main parties are united in trying to deny them a chance.

And as long as this continues, fences will only keep growing higher.

What we think: Migrants are welcome here

These migrants tend to be young and want to work. Rich parasites have no problem getting into Britain wherever they come from

Migrants didn’t cause the shortages of housing, hospitals and school places in Britain. Cuts from the government and a refusal to put in rent controls or build council housing did

Bosses will always try and use migrant workers to undercut wages. The way to stop this is to defend wages for all. Where migrants are encouraged to join unions, wages can rise for all.

Office and hospital cleaners in London—many of them migrants—have been at the sharp end of a fight for a living wage in hospitals, schools, and on the London Underground

Living conditions in Britain have got worse for most people, but this has nothing to do with migrants. It is down to the economic crisis created by the Tories and their banker friends

Poor migrants tend to come from the world’s flashpoints. When Socialist Worker visited the Calais camp in 2009, most of the refugees were from Afghanistan, Somalia, Eritrea, Iran, the Gaza Strip, Kurdistan and Darfur in western Sudan 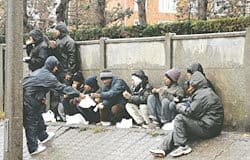 Refugees abandoned on our doorstep

The ‘cleansing’ of Calais