This article is over 17 years, 1 months old
The Make Poverty History campaign has struck a chord with young people, who turned out in large numbers for Saturday’s demonstration in Edinburgh.
Downloading PDF. Please wait...
Sunday 03 July 2005

The Make Poverty History campaign has struck a chord with young people, who turned out in large numbers for Saturday’s demonstration in Edinburgh.

“We travelled up by coach last night,” said Kate, a school student from Cornwall.

“Four local churches came together to sponsor a coach to the Make Poverty History demonstration.

“The journey was just too long for a lot of people — but they wanted to be represented.

“It’s really brilliant to see so many people here, all different groups and ages coming together to say we have to make poverty history.”

Another group of school students, Alfie, Matthew and Priya, came from Langdon School in London to protest. They were joined by former schoolmate, Shetal, who now lives in New York and travelled back to protest.

They carried cardboard cutouts of children. “We’ve been making these to represent the children denied an education,” they explained. “About three million of these have been made across the world. We feel we can make a difference too.” 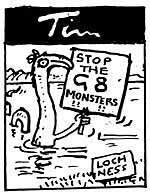 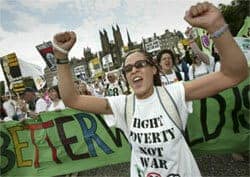 A coalition against the new global order 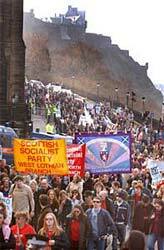 The radical history of Edinburgh

‘We must apply pressure and force the G8 to act’