Seattle spirit sweeps the US

This article is over 22 years, 1 months old
THE IMPACT of the Battle in Seattle is being felt across the US. In meetings around the country organised by the International Socialist Organisation, students, young people and workers have turned out to discuss the meaning of the protests against the World Trade Organisation. In San Francisco more than 500 people turned out on short notice to picket a WTO official who came to town from Seattle.
Downloading PDF. Please wait...
Saturday 18 December 1999

THE IMPACT of the Battle in Seattle is being felt across the US. In meetings around the country organised by the International Socialist Organisation, students, young people and workers have turned out to discuss the meaning of the protests against the World Trade Organisation. In San Francisco more than 500 people turned out on short notice to picket a WTO official who came to town from Seattle.

People everywhere are talking about how angry and disgusted they were at the vicious police crackdown-and how inspired they were that the protests wrecked the WTO conference and showed opposition to the system. In Seattle, supposedly well paid and contented trade unionists showed their bitterness at corporate America’s relentless attacks on jobs, pay and working conditions. And large numbers of allegedly apolitical young people protested against dead-end futures and environmental destruction.

The mainstream media has finally been forced to acknowledge this. As one of the ‘Seattle 600’ arrested in the crackdown, I was interviewed on CNN about how the protest showed the power of the working class. Two people arrested with me, an environmental activist and a Teamster union organiser, were quoted in Newsweek magazine.

Now Seattle has generalised that mood of opposition and generated a debate over globalisation, economic nationalism and alternatives to capitalism. In this environment, socialist ideas are getting a wide hearing. And the anger at the system we saw in Seattle could soon turn into more action.

In New York City, bus and subway workers are threatening an illegal walkout to win their demands. More than 12,000 transit workers and supporters rallied there on 7 December. Workers throughout the crowd talked of ‘bringing the spirit of Seattle to New York’. When a union official tried to lead chants of, ‘No contract? No justice!’ the workers chanted, ‘No contract? Strike!’
LEE SUSTAR, Chicago

ONE OF the biggest demonstrations in Holland in the last ten years took place last week. Over 20,000 school students marched in The Hague against the new curriculum. The demonstration was part of a nationwide strike, with hundreds marching in Amsterdam, Maastricht and Groningen.

The government introduced new programmes for high schools last year. Ever since, school students have complained about excessive amounts of work. Fourteen and 15 year olds have to work up to 50 or 60 hours a week. The enthusiasm and militancy of the school students was exemplary.

One of the organisers of the strike in Maastricht told De Socialist, sister paper of Socialist Worker, ‘Pupils who aren’t hit by the new curriculum wanted to strike out of solidarity, but the board of directors told us they weren’t allowed. Well, this is total crap and we didn’t listen to it. We told them. You can support us or not, but everyone will strike.’ Our slogan on the demonstration was, ‘The government should choose- profits or education.’ It was met with great enthusiasm.

Excessive work pressure isn’t confined to schools. The Netherlands is one of the most stress-ridden countries in Europe. Up to now, no demonstration has challenged this. The confidence of working people to fight back against the government has been low. The school students showed how rapidly things can change.
PEPIJN BRANDON, The Netherlands

But now my mind refuses to support the government. It is awful. I am really proud of Valeria Novodvorskaya, who picketed against the government’s actions and stood with Michael Burovoy in Red Square. I cannot resist like this, but I am glad that there are some people in my native land who do feel ashamed of the government.

We don’t know what kind of things will be next. They are glorifying the prime minister, Putin, and I am afraid that after Yeltsin is replaced there will be a new era of military power. But I do still hope that there will be a more optimistic future.
MARINA, Moscow

AS A Benefit Agency worker, I am responding to recent letters about cuts in disabled people’s benefits (Socialist Worker, 4 December), and about appalling treatment when applying for income support (27 November).

The Welfare Reform Bill means that if you have an occupational pension of £85 a week or more you will start to lose Incapacity Benefit. Severe Disablement Allowance will be stopped for new claimants over the age of 26.

While it cuts benefits, New Labour refuses to staff the Benefit Agency to the level needed to give a proper service to claimants. This is why people get told to ‘come back down next week’. This is all the more disgraceful when the government gives £40 million in share options to fat cats and subsidises private rail companies which kill people because they neglect safety.

Claimants and benefit workers have to fight together for the benefits that people need and the resources necessary to deliver them. I must point out that the terms ‘the disabled’ and ‘people with disabilities’ are inappropriate and insulting. The correct term to use is ‘disabled people’.
STEVE WEST, East London

NOW THAT the Northern Ireland Legislative Assembly is up and running, it is about time that the focus was placed on issues like health, education and employment. The education system in Northern Ireland is still plagued by the 11-plus exam.

At the recent annual general meeting of the Belfast branch of the NASUWT, the biggest teaching union in Northern Ireland, teachers passed a motion calling for the union to actively campaign around its policy of opposition to selection at 11. The motion also called for a demonstration against selection to be organised in the near future. One union member called the system of selection ‘criminal’.

The SWP in Belfast has collected hundreds of signatures on a petition against selection. There is definite discontent with a system that labels over 70 percent of 11 year old children as ‘failures’ every year. We hope to tap into this feeling by organising meetings and other activities. Since Martin McGuinness is now the minister for education, and he says he is in favour of abolishing the 11-plus, we intend to hold him to his word.
TEACHER, Belfast

EALING National Union of Teachers branch recently passed unanimously a motion to affiliate to the Jubilee 2000 campaign to drop Third World debt and to send congratulations to all the protesters in Seattle. We also voted to organise conferences and assemblies in local schools on the threat posed by the WTO.

We were meeting in a school which had a reception area display of work on dropping the debt, and whose chaplain had gone with students to the recent protest outside the Treasury. They took the school’s brass instruments with them to make a noise.

Students at the school also have a regular e-mail lobby of politicians across Europe to end world debt. The school’s modern IT network is being used to attack the excesses of global corporate capitalism!
NICK GRANT, West London

IT STRIKES me that we are ignoring some of the most potent issues we could address. Many young socialists are recruited from education. Colleges and universities are hotbeds of social conscience. The young people will go on to work in the media and in business. The ideas we give them will filter through.

We should recruit the young, who will bring their influence to work on the media. This should follow as a fundamental part of our goals. Only if we have the young will we truly be able to call ourselves a global party.
STEPHEN PRITCHARD, student at Holy Cross College

IT’S GREAT to see Socialist Worker actively reporting and urging involvement in environmental issues. Capitalism is the enemy of biodiversity and a rational planned economy that is environmentally sustainable. Should there not be a clause in ‘Where We Stand’ which calls for united action now? Although Marx did not speak about biodiversity, as it was not an issue when he was alive, I am sure he would have been at the forefront of the campaigns that are taking place today.
CAROLINE CONWAY, East London

REASSURANCES from senior police officers that racism will be taken more seriously following the Stephen Lawrence inquiry seem to have been totally lost on the police in Sidcup. After tearing down National Front stickers on the high street, I realised I had missed a sticker at the entrance to the police station. About five weeks later it was still there, so I went in to complain. They invited me to take it down! I told them I thought they should do it and an officer joked that he would get a probationer to do it. One week later it was still there. And this is just a few miles from where Stephen Lawrence was murdered.
REGAN, South London

ANOTHER reason why Labour lost in the 1980s (Socialist Worker, 4 December) was the massive scabbing and police operation around the Orgreave coke works. This paved the way for the defeat of the 1984-5 miners’ strike. It is struggles like these that all socialists and trade unionists must learn the lessons from.
COLIN WILSON, Halifax

Root of evil is capitalism 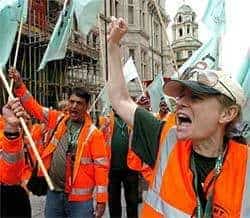 When anti-capitalism and workers’ struggles combine

Standing up to big business bullies