‘Seeds of new society are sown in battle with the old’

This article is over 19 years, 1 months old
THE FIREFIGHTERS' strike dominates the headlines and causes something approaching panic in New Labour leaders and hysteria in the right wing press. Two arguments in particular are launched against the strikers from inside the labour movement. From the right comes the view of New Labour's favourite (and knighted) professor, George Bain.
By Campaigning journalist Paul Foot writes on why strikes are key to radical change
Downloading PDF. Please wait...
Saturday 23 November 2002

THE FIREFIGHTERS’ strike dominates the headlines and causes something approaching panic in New Labour leaders and hysteria in the right wing press. Two arguments in particular are launched against the strikers from inside the labour movement. From the right comes the view of New Labour’s favourite (and knighted) professor, George Bain.

This is that the 11 percent offer over two years with strong strings is more than any other group of workers has been offered, and that the firefighters’ jobs are secure and sought after. To quote the prime minister, ‘no sensible government on earth’ could meet the firefighters’ full claim.

From the left comes the querulous complaint that we should be concentrating on ‘the big issues’ such as the threat of war in Iraq or the permanent menace of globalisation so majestically opposed by the recent demonstration in Florence. Why should we be diverted from such worldwide matters by a strike of a single small union in Britain?

Are not the firefighters, like all such strikers, just after lining their own individual pockets and using their disproportionate industrial muscle to achieve for themselves what other workers with less muscle, such as nurses, can never hope for?

Should not these matters of the distribution of resources to different sets of workers be decided by elected governments and not by the wholly arbitrary use of industrial power? All such arguments focus so intensely on the trees of the argument that they don’t even catch sight of the wood. The central characteristic of the society we live in is that it is divided by class.

The class in control – mean, greedy and above all hierarchical – owes its power, its wealth and its prestige to the exploitation and humiliation of the people who do the work. It therefore encourages a system in which workers are encouraged to heed and obey their masters.

Obedience and respect for the high, the mighty and the rich is a central principle of capitalist society. Anything that challenges any of these things is a threat, but as long as the threat can be contained within the accepted structure of the society, it can easily be contained.

So, for instance, some workers are so outraged by the way they are treated that they ‘blow the whistle’ on their employers. Others vote against parties which appear to represent their employers. But all such activity, however annoying it may be to particular employers, is contained firmly within a system of exploitation and class control. As long as revolt can be confined to a ballot box or an individual act of resistance, the culture of deference, and the insecurity and distress on which it depends, is unruffled.

This is one of the reasons, though by no means the only one, why the prospect of radically changing society simply by voting every so often is such a gloomy one. Governments come and governments go but the bosses seem to go on forever. A strike is a quite different weapon. First, it challenges exploitation directly. It sends a message to employers that they are no longer in control. Their businesses cannot run without workers. The paraphernalia of exploitation – dividends, share options and all the rest of that claptrap – suddenly vanishes.

All the little side-effects of exploitation, the petty day to day commanding and bullying, are stopped in their tracks. At once the striking worker gets a sense of liberation from the tedious dictatorship of everyday working life. No one who has ever been in a strike fails to notice that sense of liberation. It inspires and exalts workers into emancipated human beings they often find difficult to recognise as their old selves.

In a lifetime reporting industrial disputes I cannot remember a single one where the strikers have not commented on the astonishing change in their characters and their own approach to life. This sense of liberation does not spring only from the fact that they no longer have to work for a boss.

It arises in the main from the sense that they themselves are collectively in control, that they depend on one another and need to organise their own working lives together and democratically. The result is a democracy far richer than anything that comes out of local councils or parliament.

I remember during the Great Miners’ Strike of 1984-5 how the miners who came to stay with me in London insisted each night on turning on any TV current affairs programme that happened to be on. These programmes were watched by only a tiny percentage of the population and normally would have bored the miners rigid. But now they understood the issues – not just the miners’ issues but all the political and industrial issues of the time – and they wanted to discuss them.

Secondly, strikes challenge and upset the accepted rules of control. If, for instance, a council closes libraries, its decision may infuriate whole sections of the population. In Hackney, for instance, such a decision by the council has led to widespread protest from people who use the libraries. But the only time the council even thought about reconsidering its decision was when the library workers started to strike.

Without the workers, of course there could be no libraries, and at last some kind of real pressure was put on the council – pressure a million times more powerful than individual protest from citizens. This power, the feeling that the status quo can be changed or altered, enthuses the strikers with a sense that they can do much more than protest. They can change the world they live and work in – a sense they seldom get in the ordinary business of living and working.

Thirdly, strikes more often than not involve workers who are organised in trade unions and have a history of confronting their employers. If they win their strike, they pull other less organised workers up the ladder after them. If they never went on strike, no one, certainly not the unorganised or the completely dispossessed, would get anything.

What has all this got to do with socialism? Of course a strike, even if it is successful, is no guarantee of socialism. Of course most strikes are about improving the wages and conditions of one group of workers, not all of them.

The point about strikes is not that they lead automatically to socialism, but that a socialist society – a society owned and controlled from below – will never come about unless the majority of workers have shaken off what Marx called the ‘muck of ages’ – decades, if not centuries, of instinctive deference. There is no more certain method of shaking off that muck than taking part in a strike. Some proof of that is the history of the working class movement over the last 50 years.

For the early part of that period there were a lot of strikes, most of them won by the workers. The climax of that period came in the ‘glorious summer’, 1972 to 1974. Two victorious miners’ strikes, a victorious building workers’ strike and countless victorious smaller disputes changed the whole shape and pattern of class society. This was a period of fantastic advance across the whole of the movement.

Those of us socialists lucky enough to remember those times recall as though it were yesterday the enthusiasm with which the socialist message and socialist papers like Socialist Worker were greeted. Pick up any old book over the last half-century that proclaims a socialist or even a radical message and you can be pretty sure it will be dated in the early 1970s.

There followed, as a direct result of the victorious strikes, a great flowering of radical and socialist ideas, from the liberation of women to the isolation of apartheid and racism, to a healthy contempt for posturing parliamentary politicians of all parties.

The seeds of a new socialist society were sown in the struggle against the old capitalist one. The agitation of those years led among other things to the toppling of the Tories and the election of two Labour governments.

Those governments and their allies among the trade union leaders, using precisely the arguments that are used today against the firefighters, discouraged strikes, including a firefighters’ strike, and reined in the militants.

The result was a slackening in workers’ confidence and, as a direct consequence, a reactionary shift in the political mood that led to Margaret Thatcher and a series of outright employers’ victories from which we have never recovered. Now we have to put up with Blair and Prescott mouthing Thatcherite slogans and preparing to break an official strike of people who are claiming even less of a rise than the arrogant ministers have paid themselves.

So what exactly is the relationship between strikes and socialist progress? Almost 100 years ago, the Polish revolutionary Rosa Luxemburg, perhaps the most eloquent socialist agitator of all time, confronted the question in an exhilarating pamphlet inspired by the 1905 revolution in Russia.

It was called The Mass Strike, and it mercilessly mocked the notion that political progress could be divorced from industrial action: ‘After every foaming wave of political action a fructifying deposit remains behind from which a thousand stalks of economic struggle shoot forth.

‘And vice versa. The ceaseless state of economic war of the worker with capital keeps the fighting energy alive at every political pause. ‘It forms, so to speak, the ever-fresh reservoir of the strength of the working class, out of which the political struggle continually renews its strength. ‘And at the same time it always leads the untiring economic boring action of the working class, now here, now there, to individual sharp conflicts out of which, unexpectedly, political conflicts on a large scale explode.’

The two sides of the struggle, the strikes and the political activity, are essential to one another, and you can’t have one without the other. 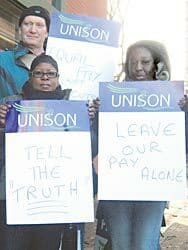 Unions must resist all the attacks we face