Seizing chances to resist the recession

This article is over 13 years, 0 months old
The session on responding to the economic crisis saw a productive discussion of strategies for encouraging working class resistance.
Downloading PDF. Please wait...
Tuesday 13 January 2009

The session on responding to the economic crisis saw a productive discussion of strategies for encouraging working class resistance.

It was introduced by SWP industrial organiser Charlie Kimber. “The economic crisis is central to the work that the party will be doing over the next 12 months,” he said. “The questions of who pays for the crisis and the level of resistance is vital.”

Delegates spoke about how the party had responded to job cuts in the car industry, Woolworths and Hoover.

All emphasised the importance of responding quickly to attacks on workers.

As Geoff from Manchester put it, “We need to shape up to the challenges ahead. We have to be able to intervene wherever things are happening.”

There was a discussion over the prospects of people fighting back in the face of crisis.

Alan from Camden said, “There is a gap between the potential and the ability to achieve that potential. The biggest problem we face is people have a lack of confidence.”

Gill from Hackney spoke about last year’s collapse of the revolt over public sector pay. “The problems were there from the start,” she said. “The trade union bureaucracy was in bed with the government.

“A significant decline in trade union organisation was a crucial factor that contributed to the collapse – despite the excellent work of people across unions.”

But John from east London argued that trade union organisation is relatively strong in Britain – and that union density is higher here than in some other parts of Europe.

The problem was rather that “the trade union bureaucracy [in Britain] is deep set and is the oldest in the world”, he said.

Paul, a teacher from east London, said, “Our work in the NUT teachers’ union sheds light on how we work in the party and alongside other people.

“The bureaucracy called and supported the strike action last year. But it was the left in the unions that shaped and made the protests and strikes what they were.

“Over the suspension of the pay campaign, we need to understand how to work with people while being able to argue with them when we disagree.”

Michael Bradley, another SWP industrial organiser, spoke about building up rank and file organisation across bus companies in London.

Much of the discussion looked to what organisational forms the response to recession should take. Sean from north London pointed to the centrality of union fraction organisation.

He moved an amendment, which was accepted by conference, arguing for a recommitment to party caucuses of members involved in trade unions and united fronts.

There were suggestions that some kind of national united front organisation should be the response to the recession. But the majority of contributions argued instead for a range of organisations and methods to be used to fight back.

Ian from Manchester pointed out, “We can’t read across from the method of Stop the War to fighting the recession.

“If the union bureaucracy are in a national united front against the recession, then they would be a block to effective action. But if the unions aren’t involved in such a front, then it would be pointless.”

As part of this range of responses, there was discussion of how the People Before Profit Charter could be used.

Chris Bambery, editor of Socialist Worker, said, “I think the charter is a question of method. It is about producing concrete demands.

“We have to put the case for socialism – but we also have to listen to workers and provide immediate responses to the problems they face.”

Candy from north London said, “The People Before Profit Charter generalises against the crisis. It can be a mechanism to encourage existing campaigns to look to a wider horizon.

“A local meeting that brought together a number of organisations adopted the charter.”

Andy from the PCS union said, “The charter isn’t a complete answer. Partly it is a banner that people can rally behind to hold meetings. But it is also a general statement of class politics. The charter can be a way into things.”

Charlie Kimber summed up by underlining how we have to work with others, and both with and against the union bureaucracy in order to build struggle.

“There are tremendous possibilities for the SWP to position itself as part of the broader formations that will be thrown up by the crisis,” he said.

“We have made a good start in rebuilding rank and file organisation. Now we need to push forward, looking for the possibility of unity with people to fight back against the crisis.” 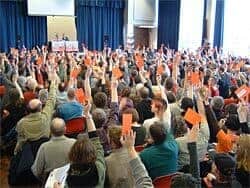 SWP conference 2009: debating the fightback in an age of slumps and war

The SWP: building a party at the heart of the movements

Stop the War: Mobilising a mass response to imperialism

Weighing up the lessons of the split in Respect

Changes in the party’s leadership