This article is over 18 years, 8 months old
THE RECENT pilgrimage by Shia Muslims to the city of Kerbala in southern Iraq shocked the US occupiers. It wasn't the display of religious fervour - George Bush, a right wing Christian zealot, has no problem with that.
Downloading PDF. Please wait...
Saturday 03 May 2003

THE RECENT pilgrimage by Shia Muslims to the city of Kerbala in southern Iraq shocked the US occupiers. It wasn’t the display of religious fervour – George Bush, a right wing Christian zealot, has no problem with that.

Rather it was the sight of hundreds of thousands of people raising slogans against the occupation. Opposition to the US is growing among the Shia Muslims of Iraq, the very people we were told would welcome ‘liberation’ at the hands of the marines. The Shias are one of the two central branches of Islam. Sunni Muslims are the majority, over 80 percent.

But the Shias form the majority of Muslims in Iran, Iraq, Bahrain, eastern Saudi Arabia and Azerbaijan. In Iran they make up 93 percent of the population. In Iraq is it probably 60 percent. The split between Shia and Sunni arose soon after the death of Islam’s founder, Mohammed, in the year 632.

One section of his followers, who became the Shias, felt the religion was being taken over by corrupt tribal chiefs from Arabia. The Shias looked instead to Ali, who as Mohammed’s son in law had worked closely with the prophet himself.

Ali was murdered by his rivals. His son, Hussein, was killed when he refused to surrender in the face of overwhelming odds at a battle near Kerbala in 680. Shi’ism was marked from the beginning with this image of sacrifice and suffering, which was re-enacted in the pilgrimage two weeks ago. As with any religion, part of the message of Shia Islam is designed to appeal to the poor and the powerless.

At various points for 1,000 years Shi’ism became the rallying point of those denied the privileges enjoyed by the Sunni Arab rulers who dominated the Islamic Empire. But, again like all other religions, Shi’ism also had a message for the rich and powerful.

It preached conciliation between rich and poor. There was a Shia empire encompassing today’s Iran and Iraq in the Middle Ages. An organised Shia clergy – headed by people with the title ayatollah – interpreted the contradictory religious message to fit the aspirations of the rich and the poor. Rival ayatollahs would also develop a following for themselves.

Large numbers of poor farmers in the area now known as Iraq converted to Shi’ism in the 19th century. ‘Conversion was an act of protest against the widening gap between rich and poor, especially against the Sunnis who had become the landed aristocracy,’ says historian Yitzhak Nakash.

Shia leaders voiced the peasants’ hostility towards the Turkish Ottoman Empire. They also opposed Western colonialism. Clerics issued religious edicts against the British when they invaded Iraq during the First World War.

Gertrude Bell was a key figure in the colonial regime Britain imposed on Iraq. She singled out the Shias as particularly hostile to the British, describing them as ‘violent and intractable’, and ‘fanatical and conservative’. The Shias were the majority, so the British ruled out introducing democracy. Instead they installed a Sunni king.

This provoked a huge revolt, which began in the Shia holy city of Najaf in 1920 and swept across Iraq as Shia preachers urged worshippers to resist the British. The revolt was eventually defeated and the Shias were punished. They were excluded from top jobs in politics, the civil service and the army.

Every succeeding government in Iraq continued to exclude the Shias. When Saddam Hussein later repressed the Shias, he was following in the footsteps of the British and their stooges. Saddam’s repression intensified after the overthrow of the Shah in neighbouring Iran in a revolution in 1979, which Shia leader Ayatollah Khomeini came to head. Iran in Bush’s sights

Khomeini tapped deep bitterness at US imperialism. He also stood for highly conservative social policies – bans on ‘un-Islamic behaviour’, dress codes for women and repression of socialist organisations. Within 18 months he was able to outflank the forces of the left and restabilise Iranian society, allowing those businessmen who remained in the country to flourish alongside a new layer of Islamic state bureaucrats.

But the revolution in Iran led to a new ‘spirit of resistance’ in the Middle East, according to journalist Robert Fisk. About 40 percent of Lebanon’s three million people, often the poorest, are Shias. The main Shia organisation in Lebanon, the Amal, initially welcomed Israeli intervention in the country in 1982. It hoped Israel would free them from oppression at the hands of other Lebanese factions.

But Israeli and US atrocities drove the mass of Shias behind the Iranian-backed Hizbollah organisation, which eventually forced the Israeli army to withdraw completely from Lebanon in 2000. Both Hizbollah and the Iranian regime enjoy prestige among many Shias in Iraq today.

The US is worried that pro-Iranian ayatollahs are picking up support. It has openly threatened Iran, pushing crude myths about its complex and changing society. Large numbers of women are in the workforce and some are in parliament, despite the socially conservative message of Iran’s rulers. The US desperately hopes these social changes will produce a regime in Iran that bows to its interests.

But the underlying problem it faces in the region is not simply the Shia Islam of the Iranian regime. Most Iranians who oppose the regime also oppose the US. It is bitterness at poverty and imperialism that leads masses of people to resist the US, whether under a Shia banner or not.
Judy Cox 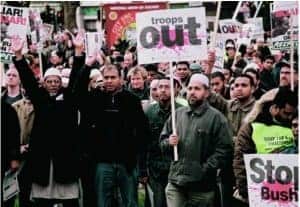 What kind of direct action do we need to stop the war machine?