Shut out of the Thames Gateway

The lesson of history is that the rich like to push the poor around. From the Highland Clearances in Scotland in the late 18th and early 19th centuries, to forced removals in apartheid South Africa and Chinese dam projects, those with power want to tell those without it where and how to live.

The methods may, we hope, be more subtle and less violent, but a major exercise in population displacement is afoot in the East End of London.

An unholy alliance of local authorities and big business is planning to completely transform the area, aided and abetted by New Labour and its neo-liberal ideology.

The model for what’s in store is to be found in what is now known as “Docklands”, an entirely artificial marketing label for what, until recently, was a traditional working class community.

When the London docks closed, the site held the potential to improve the lives of those who had worked in the docks and lived by them for generations. Thousands of affordable homes could have been built and jobs created to meet the needs of local people.

So we saw the creation of a colony of capitalism – office blocks surrounded by expensive bars, shops and restaurants. Lots of money came into the area, but only a tiny fraction of it “trickled down” to local people.

Very few of the good jobs in Docklands have gone to the people of Tower Hamlets and Newham. Despite thousands of new homes being built, the overwhelming majority have been luxury, riverfront apartments, way beyond the means of working class people.

The biggest – and as yet unaccounted for – scandal is that all this has been done with the assistance of billions of pounds of public money, effectively a free handout to big business.

But the scandal of Docklands will be dwarfed by what could lie ahead. The root explanation for this lies in the proximity between the East End and the City of London.

Eight years ago, an acquaintance of mine met with a senior officer from the City of London Corporation, who calmly told him, “Over the next 20 years, we reckon we need about 100 million square feet of new office space.”

Where was this to be found? Certainly not in the West End or the borough of Kensington and Chelsea, but in what has always been the City’s backyard, Tower Hamlets.

The first to feel the pressure have been the people of Spitalfields, in the borough in which I live, Tower Hamlets. With the connivance of the New Labour council, the old fruit and veg market has been redeveloped to create glass offices and wine bars.

The Bishopsgate Goodsyard, having lain fallow for years, is now being bulldozed. The local community, mostly poor and Bangladeshi, are falling under the shadow of a big, noisy, powerful neighbour.

For 20 years the people who lived in the area around Brick Lane have witnessed many changes, with traditional industries and shops replaced with boutiques and art galleries.

Some of these changes have been for the better, but now the area faces a far more fundamental threat.

Tower Hamlets council is currently “consulting”, a word it has devalued, on its development plan for the next decade.

Within it is a target to build over 40,000 new homes, 6,500 of which will be in what is termed the “City fringe”. This thin sliver of land is already densely populated and 30 percent of households live in overcrowded conditions.

No more than half of these new homes will be “affordable”. To put it more tellingly, at least 50 percent will be unaffordable to local people.

There are 20,000 people on the housing register in Tower Hamlets and the average income is just £12,000. The development plan is clearly not going to meet the needs of local people, so whose interests will it serve?

I believe the answer lies in an ambition to create a new type of community, from Bishopsgate to Canary Wharf and beyond.

London mayor Ken Livingstone and Tower Hamlets council have a vision of London as a world city. Their glossy documents and videos envisage a place of gleaming office towers, coffee bars and consumerism.

You do not have to be a conspiracy theorist to see that people with incomes of less than £12,000 a year do not fit this image. Livingstone’s London Plan and the Tower Hamlets development plan envisage a dilution of the number of poor people living in Tower Hamlets.

This will be achieved by attracting “new” people to the borough and squeezing out those who cannot afford to stay.

Another crucial feature in the redrawing of the East End map is Crossrail, the much delayed rail link between east and west London.

Nobody, least of all Respect, wants to be arguing against increased public transport, but the human and financial cost of this project must be challenged. Do the massive costs outweigh the potential gains? Again, it is the people of east London who will bear the brunt. A shaft the size of one of the towers of Tower Bridge will be sunk just off Brick Lane.

Construction will be taking place night and day for up to seven years. Spoil from the shaft will be dumped in Mile End park.

Homes, businesses, community facilities and city farms along the route will be blighted. We are told that, in return for all this, the local area will benefit from having a new tube station at Whitechapel.

The truth is that Crossrail is not really designed for the benefit of the people of Tower Hamlets. Its real purpose is to make it easier for businessmen to travel from Docklands to the leafy western suburbs and Heathrow airport.

The Limehouse Link road was the most expensive road in Europe. Hundreds of council homes were demolished to make way for it and local people suffered years of disruption so that the city slickers could drive to Canary Wharf. Crossrail is the public transport equivalent.

There is a grand plan for the whole of the east London area, known as the Thames Gateway. It is no coincidence that Eric Sorensen, its chief executive, used to be the boss of the LDDC, and that the leader of Tower Hamlets council, professor Michael Keith, is on the Thames Gateway board.

Their vision embraces the east London boroughs as far as the Essex border, where there are huge tracts of brownfield sites for development. As with the London docks, this land holds the potential to make a real difference to the lives of some of the most deprived communities in Britain.

But is that how it will be used, or will the Thames Gateway become a private property developers paradise?

The vision of identikit pseudo-communities, some of them housing the displaced of Tower Hamlets, is all too vivid. These will be the homes of the service class, who can catch the Crossrail link to the City and Docklands each day, to clean the offices and make the coffee.

For the likes of Keith, Sorensen and Livingstone, the cherry on the cake is the 2012 Olympics. Again, local people are bedazzled with the new sports facilities and homes, but could end up like children pressing their noses against the sweet shop window.

They will not be encouraged by the recent news that “Red” Ken has decided that the “target” of 50 percent affordable homes in the London Plan can be reduced to an aspiration, or that homes for people on £49,000 a year can be deemed “affordable”.

The video game SimCity allows players to indulge in virtual town planning. This is not a game, but a battle for the future of our capital.

Locally and nationally, New Labour is in thrall to big business – opening PFI schools and hospitals, while local supermarkets and libraries close and council housing is destroyed.

We are set on a course of creating the kind of suburbs of displaced poor they have in France and the ethnically divided cities of the US.

But people will resist and Respect will be the political articulation of the resistance. As a start, we aim to take control of Tower Hamlets council in the local elections in May. If we do, the development plan will be the first thing in the recycling bin.

Sarah Ruiz: 'They'll drive the poor out of Newham' 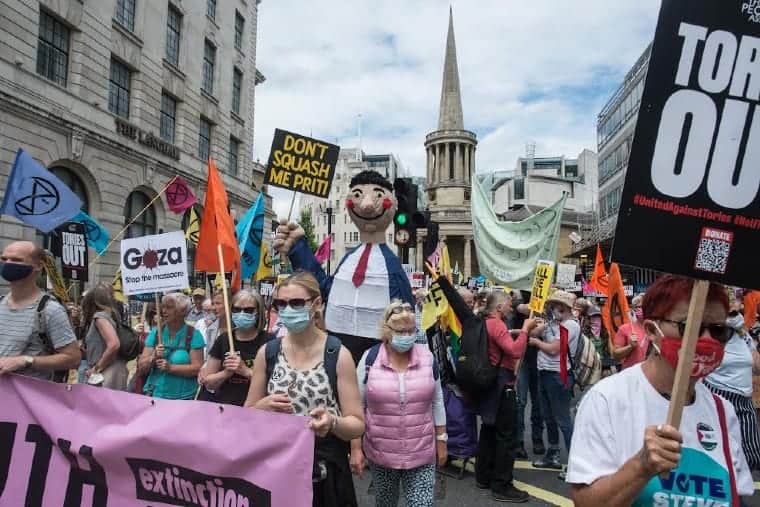