This article is over 19 years, 9 months old
\"We protested against the war in Afghanistan, but we could not stop it happening. This time we have a chance to stop it, and to create a big crisis for Blair.\"
Downloading PDF. Please wait...
Saturday 23 March 2002

‘We protested against the war in Afghanistan, but we could not stop it happening. This time we have a chance to stop it, and to create a big crisis for Blair.’

So says Andrew Bergan from the Stop the War Coalition. The coalition has produced a national petition, ‘Don’t Attack Iraq’, which it aims to get hundreds of thousands of people to sign. There is a huge and growing mood of opposition to ‘phase two’ of Bush and Blair’s war.

This was shown by an opinion poll in the Guardian this week which showed a majority of voters in Britain are against Britain backing a US attack on Iraq. Bush and Blair are increasingly isolated in their drive to blast Iraq. If we can build up a massive wave of opposition in Britain we can make it impossible for Blair to back Bush’s drive to war. But that means we need to be agitating now.

Everyone should add their name to the ‘Don’t Attack Iraq’ petition, and ask their friends, workmates, families, and everyone they know to sign it too. Everyone could organise a canteen or other meeting against an attack on Iraq at their workplace, college, school or local community centre. We can organise protests and stunts to help build up opposition to Bush and Blair’s war drive.

More than this, we should try to get people to commit themselves to taking to the streets and organising action if Bush and Blair do attack Iraq. The Stop the War Coalition is encouraging groups to follow Tony Benn’s call for civil disobedience if the war on Iraq is launched. Benn told a 20,000-strong anti-war demo that ‘non-violent resistance to the government will show they cannot claim to do this in our name. We should stop the buses, stop the trains, stop the schools.’

Lindsey German, the Stop the War Coalition convenor said, ‘We are urging people to start campaigning very seriously now. ‘We may have a few months to collect signatures, pass resolutions against the war, and organise workplace meetings and walkouts if war begins.’ In Northampton the local Stop the War Coalition is planning an anti-war procession through the town on Saturday 6 April.

The Scottish Coalition for Justice not War has planned a day of action for this Saturday, 23 March, and a demonstration in Glasgow on Saturday 27 April. In Manchester the group is making huge anti-war banners. If Iraq is attacked, the group plans to meet early in the morning to hang the banners from major bridges across Manchester.

Local Stop the War Coalition groups are also going all-out to build for a huge turnout on the CND demonstration, ‘Don’t Start Wars’, in London next Saturday. If we act now we can build a mass movement against the war.

Still fighting the war they said was won

THE government announced this week that it is to send to Afghanistan the biggest deployment of British troops since the 1991 Gulf War. They are to fight in a war that Tony Blair and George Bush told us that they had won.

It shows that it was a lie when at the end of last year they claimed the war was over, and that the Taliban and the Al Qaida network had been routed. Far from a quick ‘victory’, US troops are being humiliated in Afghanistan. Even US military circles are now admitting the US suffered a defeat in eastern Afghanistan last week.

The Guardian describes how ‘US forces have described the difficulties in operating in the mountains familiar to the enemy, and the lack of high altitude training in the US.’ George Bush is still determined to ‘deal with’ Iraq. But support for his war is crumbling, even among his loyal allies. Some of Saddam Hussein’s Iraqi opponents are against US attacks.

‘We don’t agree with an American attack on Iraq,’ said Ayatollah Hakim, leader of Iraq’s exiled Shi’ite population. ‘A US attack on Iraq will cause great suffering to ordinary people.’ Another US ally and NATO member, Turkey, is also opposed to war on Iraq.

‘We feel that Iraq should not be the subject of military attacks because it would upset the whole Middle East,’ said Bulent Ecevit, the Turkish prime minister. US vice-president Dick Cheney has been scuttling round the Middle East to whip up support for the war on Iraq.

‘An American attack on Iraq is not in anyone’s interests. It will be a catastrophe,’ argued Crown Prince Abdullah of Saudi Arabia. European leaders like Gerhard Schršder of Germany have expressed their doubts about US action.

Many of the leaders will try to cave in if Bush goes ahead with his war on Iraq. But if there are fears and unease about war on Iraq at the top, then there is massive anger at the grass roots. That anger can be forged into a mass anti-war movement that can stop the attack on Iraq.

Supported by the Stop the War Coalition 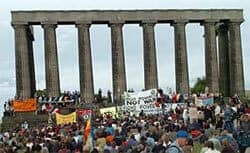 Try telling them that the occupation is now over