Smashing the myth of a united Wales

This article is over 12 years, 11 months old
In her final column Siân Ruddick looks at workers’ resistance from the 1920s to today
Downloading PDF. Please wait...
Tuesday 20 January 2009

By 1925 poverty in Wales was becoming unbearable.

Unemployment stood at 26 percent and bosses tried to force through attacks on the miners – but workers continued to fight back.

The pit manager tried to shelve the “last in, first out” seniority rule – in an attempt to get rid of more militant workers.

Miners responded with strikes. They faced battles with the police in which one senior police officer was killed.

For ten days, the Ammanford miners controlled the town. Eventually their hold was broken and 58 miners were imprisoned – but they had won the battle to keep the redundancy rule.

Yet attacks on miners continued, and a national strike was called for July.

The miners won a high level of solidarity. Rail and dock workers – the forces involved before the defeat of Black Friday in 1921 – reorganised.

But the strike was suspended when Tory prime minister Stanley Baldwin promised to hold an inquiry into working conditions in the mines and to subsidise miners’ wages.

This was seen as a victory. But in the end the inquiry backed the coal bosses, who continued their attacks on miners’ wages in 1926.

The previous struggles had made a lasting impact on the miners. They rejected a 13 percent pay cut and the bosses locked them out.

The TUC backed the miners and in May the General Strike began.

Welsh workers threw their energy into the strike. Food distribution and transport were organised by committees of workers and their families.

Yet after nine days the TUC called off the strike.

As winter set in and the temperature dropped, conditions in the striking communities worsened.

Malnutrition was rife. Children went to school barefoot and women fainted in the streets from lack of food after feeding their families first.

Hundreds of miners were jailed and the rest returned to work in December.

Membership of the union shrank. A lack of revolutionary leadership meant that reformist ideas – in the form of the Labour Party – dominated the movement.

Labour took 64 percent of the vote in the coalfield. But instead of using this to push for improvements for the miners, Labour Party officials played a role in selling out the strike and some joined with the Tories to form a national government in 1931.

The economic crisis of the late 1920s and 1930s devastated Wales. In 1928 one in seven children in the Rhondda were malnourished.

In the late 1930s, 20 percent of children in Merthyr died before they reached their fifth birthday.

The choice for many workers was to stay and starve or head to England.

Some argued that whole expanses of industrial South Wales should be abandoned entirely and the population transported to England.

The National Unemployed Workers Movement organised hunger marches against job losses and against the degradation of unemployed people.

Unemployed workers were humiliated by being forced to survive on tiny handouts from public assistance committees.

Anger won out over fear and the marches were huge.

The Unemployment Assistance Board in Merthyr was ransacked by a march of 3,000 people, led by women, who burned the records held there.

Local newspapers and chapels condemned them. But the movement continued.

The history of this period gives the lie to myths that there was ever a united Wales.

Welsh bosses fought for their interests against the workers – and called in the police and army to back them up.

Wales has continued to be a site of class struggle – workers protested and struck against pit closures in the late 1940s.

When Margaret Thatcher took on the miners in 1984, the strikes across South Wales were solid.

Today, as whole sections of Welsh industry are faced with destruction yet again, we need more than ever to draw inspiration from the militant history of the working class in Wales. 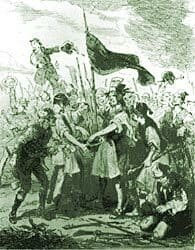 Raising the red flag for workers’ rights in Wales

Unrest rolled out across the Valleys