So why can’t anyone in Barking get a council house?

This article is over 11 years, 9 months old
Margaret Thatcher’s election in 1979 marked a turning point for housing in Barking—and the rest of Britain as well.
Downloading PDF. Please wait...
Tuesday 13 April 2010

Margaret Thatcher’s election in 1979 marked a turning point for housing in Barking—and the rest of Britain as well.

The Tories were determined to shift away from providing public housing to relying on the private market.

In the 1970s, the council housed two in three households in Barking & Dagenham.

The huge Becontree estate in the heart of the borough was a symbol of that era.

It was built after the First World War and was completed by the early 1930s.

With 27,000 homes and 120,000 people living there it was the largest public sector housing development in the world at the time.

Thousands of overcrowded families moved out of London’s east end to live there.

For much of the twentieth century the local economy was based on heavy industry—in contrast to what was typical of London as a whole—taking advantage of the local docks.

Much of that industry has been destroyed and new employment is largely in the service sector.

Under Thatcher’s “Right to Buy” scheme, council tenants were able to buy their council homes. Big discounts, up to 60 percent in some cases, were offered on the sale price.

People moved from places like Newham or Hackney to buy somewhere for the first time, or to get somewhere bigger as their families grew, or because rents were cheaper.

The west of the borough in particular has become much more ethnically diverse in recent years. But as Labour councillor Milton McKenzie insists, “The idea that migrants have taken council housing is a load of rubbish.”

Barking & Dagenham council doesn’t keep complete records of the ethnic mix of its council tenants. It has kept a record of people moving into council properties—both new tenants and those moving between council homes. 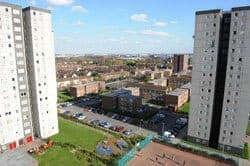 The myth of 'Africans for Essex'

Why are so few there so few council houses now?