Socialists and Islamists: We’re on the same side… sometimes

This article is over 10 years, 1 months old
An extract from The Prophet and the Proletariat, by Chris Harman
Downloading PDF. Please wait...
Tuesday 15 May 2012

On some issues we will find ourselves on the same side as the Islamists against imperialism and the state. This was true, for instance, in many countries during the second Gulf War.

It should be true in countries like France or Britain when it comes to combating racism. Where the Islamists are in opposition, our rule should be, “with the Islamists sometimes, with the state never”.

But even then we continue to disagree with the Islamists on basic issues. We are for the right to criticise religion as well as the right to practice it…

Above all, we are against any action which sets one section of the exploited and oppressed against another section on the grounds of religion or ethnic origin. And that means that as well as defending Islamists against the state we will also be involved in defending women, gays, Berbers or Copts against some Islamists.

When we do find ourselves on the same side as the Islamists, part of our job is to argue strongly with them, to challenge them—and not just on their organisations’ attitude to women and minorities, but also on the fundamental question of whether what is needed is charity from the rich or an overthrow of existing class relations.

The left has made two mistakes in relation to the Islamists in the past.

The first has been to write them off as fascists, with whom we have nothing in common. The second has been to see them as “progressives” who must not be criticised.

These mistakes have jointly played a part in helping the Islamists to grow at the expense of the left in much of the Middle East.

The need is for a different approach that sees Islamism as the product of a deep social crisis which it can do nothing to resolve, and which fights to win some of the young people who support it to a very different, independent, revolutionary socialist perspective.

Further reading: The Prophet and the Proletariat is in Chris Harman’s Selected Writings. Available at Bookmarks, the socialist bookshop. www.bookmarksbookshop.co.uk

You can also read The Prophet and the Proletariat online at www.marxists.de/religion/harman 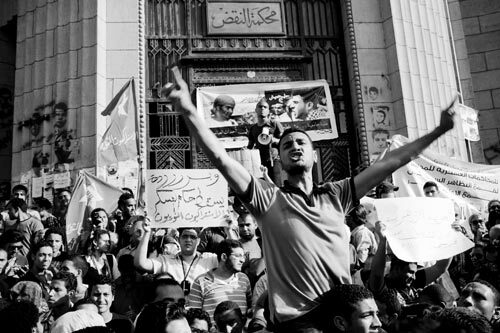 Egypt: Faith in the revolt