This article is over 10 years, 3 months old
Electricians have protested around Britain to stop bosses imposing 35 percent pay cuts and tearing up their contracts – Simon Basketter looks at the battle
Downloading PDF. Please wait...
Tuesday 18 October 2011

Electricians are fighting a raw form of class struggle. On one side stand multinational corporations determined to maximise profits—on the other rank and file workers organising to defend their livelihoods.

They are building up their strength and confidence with a series of escalating protests in an industry that is hard to organise, but militant.

Electricians have blocked bridges, roads and construction sites across Britain. They have marched against attempts by building bosses to slash their wages and wreck their terms and conditions.

A group of building contractors have set up the Building Engineering Services National Agreement (Besna) in opposition to the existing Joint Industry Board (JIB) national industry agreement.

The JIB protects workers’ rights and helps to ensure they get paid according to their skills and training.

The new proposals would cut wages by up to a third.

Keith, an electrician, said, “They’re not tearing up our agreement—they’re tearing up the industry. We have to stop deliveries to sites, and hold them up and hit them in the pockets.”

Vince, an electrician in the Unite union, told Socialist Worker, “These companies want more control over the hiring and firing on site. They are trying to get a skills card license so they can have their own card grading system for workers.”

Workers from sites protesters have targeted have come out to join the protests—despite intimidation from site security and managers.

Protests have repeatedly developed into pickets and workers have refused to cross them.

The temporary nature of building work is an obstruction to workers’ organisation. Trade unionists often have to start from scratch on each new job.

They face a ruthless hire and fire system. This is reinforced by a blacklist that has kept trade unionists and safety reps off sites for years at a time.

In the drive to maximise profit, a low priority is given to workers’ safety and their lives.

Bosses are constantly trying to chip away at work times. Keith said, “There is constant pressure to broaden the jobs people do.

“They are always trying to get people to do work they’re not trained in. If there is a corner to cut, they’ll cut it.”

All this forces a type of rough and ready organising. As one worker put it recently, workers had to “take the protest to the bosses” because “sometimes you have to make it personal”.

Construction workers are powerful. As Tom, an electrician from the Midlands, pointed out, “Moving a crane isn’t cheap. Each bit of a job is dependent on others, stop it and you can grind things to a halt.”

In Manchester last week, according to one worker, “Some 40 workers from Balfour Beatty and 15 from Lectec refused to show for work.

“But the biggest triumph of the day was when four

minibuses full of sparks took our leaflets, refused to cross the line and drove away to a great applause.”

Recently there have also been walkouts—at the Grangemouth site in Scotland and at West Burton and Ratcliffe power stations in Lincolnshire.

In London last week workers blocked the Millennium footbridge and the roads round St Paul’s Cathedral before marching to Blackfriars station—a Balfour Beatty site. They protested in London every Wednesday for two months.

The growing confidence of workers to organise is seen on each successive protest. But so is the pressure from Unite for moderation—and the police’s outright hostility. But workers have outwitted cops’ attempts to curtail the protests and have forced their union to back the campaign.

Some 1,690 workers at Balfour Beatty have been issued with notice that they will be sacked if they don’t sign the new terms and conditions.

One Balfour worker told Socialist Worker, “They need to call us out across the country—otherwise the companies will walk over you.”

Pat pointed out the workers are coming out of a period of disorganisation. He said, “The last time bosses launched an assault on us, in 2000, there were a series of strikes on the Jubilee line extension, Pfizers and others. We defended ourselves—but they took their revenge with the blacklist.

“Over the last few years, the industry has become less well organised. Unions signed up to many bad deals, turned a blind eye to too many bad things. We are rebuilding on the hoof.”

Many companies try to get away with minimum safety measures and training.

Wages are forced down. Responsibility for paying for training, holiday, sick leave and pension rights is displaced down the subcontracting chain onto the workers.

Working practices have changed. In the 1970s workers’ struggle won the abolition of “the lump”—casual work where you got a lump sum for a job.

Keith said, “In the 1970s it was the lump, now it’s agency work or subbies. It’s new ways of doing the same old thing—give us less so they can take more.”

Doug told Socialist Worker, “You can’t get taken on direct by firms. Agencies charge you £20 or £30 a week, and you don’t get paid holidays.

“It’s not unknown for the employer to disappear when you declare a dispute.”

The entire system is set up to divide and weaken organisation. But there is a determination for unity.

“The immigrant workers came out when we came out at the protest on our site,” Vince told Socialist Worker. “The bosses want to push us apart but the point is to stick together.

“The attack on the agreement is an attack on all grades and all jobs. If they get away with this they will push into all parts of the industry.”

He went on, “On the protests we have had subcontractors, agency workers and the directly employed all working together—that’s how we can become strong.”

And the pressure is working. One company, MJN Colston, has backed off from breaking the agreement in response to the rank and file campaign. Others are in danger of losing contracts because of the protests.

7 December. Many are determined to join the 30 November public sector strikes.

“The union leaders say they are in favour of direct action,” said Tom. “We’re giving it to them. Let’s see them give the green light to industrial action.

“Whether legal or illegal, ballot or no ballot, we need walkouts on sites to stop the bosses.”

1972 - when building workers shut down the country 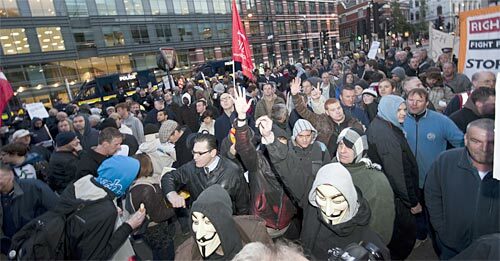 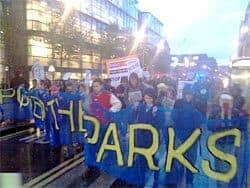