When German foreign minister Joachim von Ribbentrop arrived in Moscow in August 1939 to meet his Russian counterpart, Russian dictator Joseph Stalin turned out to greet him.

As the date of Hitler’s attack on Poland approached, the Germans rushed to convince the Russian government of the benefits of a non-aggression pact between the two states – a secret agreement partitioning Poland, granting the Baltic States to Russia and offering Russia generous trade arrangements.

On 17 September, shortly before Poland surrendered to Germany, the Russian army invaded from the east.

After Poland surrendered, Stalin and Hitler issued a joint statement calling for Britain and France to accept the new order and make peace, stating, “If, however, these efforts of both governments remain unsuccessful, it will be established thereby that England and France bear the responsibility for the continuation of the war.”

In December 1939 Stalin assured Hitler that the alliance between Russia and Germany was “cemented in blood”.

Attacks on fascism ceased to appear in the Russian press and the world’s Communist parties switched from supporting a “people’s war against fascism” to opposing “imperialist war” in the wake the pact.

Eight hundred exiled German communists were transferred across the Soviet border into the welcoming hands of Third Reich’s Gestapo.

Stalin could point to the refusal of the British and French to seal a pact against Hitler but his priority was not fighting fascism but establishing control of Eastern Europe in order to create a buffer zone between Russia and Germany.

Stalin was prepared to trade with anyone to obtain that.

The subsequent argument deployed by the Kremlin to justify the Hitler-Stalin Pact was that Russia bought vital time to prepare its defences.

Yet until Germany attacked Russia in June 1941, Stalin refused to countenance that the Führer would break his word. It was Hitler who bought time. With his eastern frontier secure, he was free to attack westwards into France.

The supplies flowing from the Soviet Union to the Third Reich were vital to Hitler’s ability to wage war. They kept flowing until German troops invaded Russia.

The realisation that Hitler was intent on bringing down genocide on the Russian people ensured resistance stopped the Germans just short of Moscow.

[updated to correct error in dates] 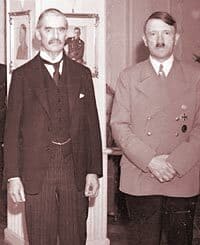 Outbreak of the Second World War: Who were the ‘guilty men’?