Standing together for civil liberties

LAST WEEK’S Socialist Worker, highlighting the arrest and brutal treatment of Baber Ahmad, won a lot of respect for sellers around the country.

Jay says, “We petitioned for the release of Baber Ahmad at the central mosque in Nottingham.

“They opened an annex so we could get out of the rain but still talk to people. This was an act of friendship and integration. One member of the congregation took petitions away and wants more information on the European Social Forum, Respect and the SWP.

“An ex Labour councillor approached us saying he admired our work and that he wants to work with us. We sold 15 copies of Socialist Worker.”

Andy says, “We had a really good response at Birmingham central mosque.

“It is always a rush as people leave the mosque, but 25 people bought the paper.”

Pete from London says, “Socialist Worker was extremely popular at the picket of the Home Office for Baber Ahmad. People were asking for extra copies of the petition we initiated for his release. We sold 58 copies of the paper, with groups of people taking a copy away between them.”

FOLLOWING Oliur Rahman’s Respect election success in Tower Hamlets, east London, Socialist Worker sellers have been selling the paper to a regular group of buyers in the ward.

Narz reports, “People now recognise us and the paper, and are keen to get a copy from us. We have a group of around 16 people who will buy the paper if we catch them in. Last night four people were at home and they all took the paper.”

AFTER THE victory for Sheffield bus drivers reported in last week’s Socialist Worker, sellers got a good reception on the buses.

“This involves wandering around the bus station, waiting for a bus to come along, and then jumping on and selling a paper. It works!’ 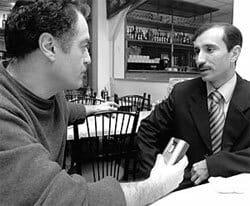 An opportunity to engage people