Stephen Lawrence murder trial: Evidence like a needle in a haystack

This article is over 10 years, 1 months old
A forensic expert has told the Stephen Lawrence murder trial that tiny fibres linked to the victim were not initially found on the suspects’ clothes because it was like "looking for a needle in a haystack".
By Simon Basketter
Downloading PDF. Please wait...
Saturday 26 November 2011

A forensic expert has told the Stephen Lawrence murder trial that tiny fibres linked to the victim were not initially found on the suspects’ clothes because it was like “looking for a needle in a haystack”.

Gary Dobson and David Norris are accused of the murder, which took place in 1993.

Angela Gallop, who examined exhibits in 1995 and 2007, told jurors that a later search was much more thorough.

The first tests involved looking at 1,071 fibres. The second, undertaken by private firm LGC, found around 4,500.

Then the team found red fibres similar to those in 18-year-old Stephen’s red polo shirt on clothes belonging to defendants Dobson and Norris.

Adrian Wain, original chief forensic scientist in the case, admitted that evidence in the case may have been contaminated as long as 12 years ago.

The scientist was in charge of the investigation into the killing for 13 years.

Wain had cast doubt on whether key exhibits had been contaminated – long before a later forensic examination discovered new evidence on which this trial hinges.

The prosecution insists that the evidence, found when scientists re-examined the garments during a cold case review in 2006, proves the pair were among the violent gang that killed Stephen.

The defence, however, has rejected it as merely a “teaspoon” of evidence, the product of cross contamination over the years.

Wain insisted that his staff in 1993 had done everything to protect the evidence while it was in their laboratory. But in cross-examination Timothy Roberts QC, for Dobson, produced a report from a senior officer made in 1999.

Detective Chief Superintendent Barry Webb wrote that both Wain and the exhibits officer had questioned “the deterioration of the packaging of the clothing exhibits in this case”.

Roberts also produced a letter by the scientist two years later. In it, he wrote that he was “reluctant” to do so, given that he had only found one fibre with a weak match to Dobson’s jacket on Mr Lawrence’s jacket and “my concern about the possibility of contamination in this case”.

Do men help to oppress women? 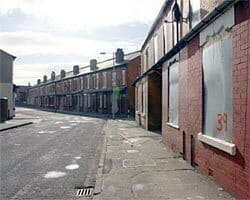 The hidden victims of Blair's Britain