Surely we can do better than this?

This article is over 19 years, 11 months old
TRANSPORT IS the number one political issue in Britain. For the whole of last year it registered at the top of people's concerns in opinion polls. Now the crisis has blown up in New Labour's face. It has taken industrial action by rail workers to force the government to take notice of the bitterness of millions of people as they struggle to complete even short journeys. Tony Blair's response last week was to attack striking rail workers. But transport was in chaos long before the recent strikes. The biggest reason is that successive governments have spent so little on the basic infrastructure. Spending on transport as a share of national wealth has halved in the last 20 years. In its f
By Kevin Ovenden
Downloading PDF. Please wait...
Saturday 19 January 2002

TRANSPORT IS the number one political issue in Britain. For the whole of last year it registered at the top of people’s concerns in opinion polls. Now the crisis has blown up in New Labour’s face. It has taken industrial action by rail workers to force the government to take notice of the bitterness of millions of people as they struggle to complete even short journeys. Tony Blair’s response last week was to attack striking rail workers. But transport was in chaos long before the recent strikes. The biggest reason is that successive governments have spent so little on the basic infrastructure. Spending on transport as a share of national wealth has halved in the last 20 years. In its first term New Labour spent less on transport, especially rail, than even the previous Tory government.

The ‘extra’ spending the government has announced since scarcely brings investment levels back to where they were. The totals come from counting the same money twice. The government’s own Commission for Integrated Transport says it is not enough to meet New Labour’s ten-year plan, which does not even aim to cut road traffic and congestion.

Privatisation is the second immediate reason for the transport crisis. Public subsidy to the privatised rail industry is twice what it was under British Rail. In the year of the fatal Hatfield crash the privatised rail infrastructure company Railtrack received £1.5 billion in subsidy and handed £350 million of it to shareholders.

Those big shareholders are now taking legal action against transport secretary Stephen Byers, accusing him of renationalising the company when he declared it bankrupt last October. But Byers wants to hand the new company over to the man who oversaw the final stages of the disastrous Millennium Dome project. The government also wants to force through the privatisation of London Underground. Rundown in safety on the tube has already begun. London Underground was fined £225,000 after one of its managers forced maintenance crews to work inches from live rails, at night, in the rain, with trains speeding past.

New Labour has brought more privatisation. Air traffic control has been in private hands for only a few months. It has just demanded more public subsidy to pump up profits and boost shareholder dividends. The transport crisis is one of the sharpest consequences of letting free market capitalism rip through a whole society.

People are making more journeys, longer journeys, and spending more time and money doing so than a generation ago. They are forced to travel more even though people’s leisure time has been falling for 20 years. The bulk of those journeys are by car. The Tories had a deliberate policy of increasing car and lorry use. They encouraged a move away from rail freight to road transport. The result was a huge increase in the number of lorries on the road. Some 90 percent of freight is now carried on the roads.

That is a major source of congestion and pollution. The rundown of rail meant that companies setting up new factories built them near roads. That created a vicious circle of increasing road use. People came under pressure to turn to the car to get to work. And the chaos of capitalism means there is no planning to create jobs in the areas where they are needed.

So there are shortages of key workers in areas like London (where house prices are high). This means that people in other parts of the country are forced to travel to meet the demand. The closure of local workplaces and their replacement by, for example, call centres has meant that within cities the length of journeys to and from work has increased.

Free market policies in other areas of life have also increased the number and length of journeys. Ending the planned allocation of school places by local education authorities means more children have to travel considerable distances to and from school. Parents don’t want it. There are popular campaigns in many areas for local schools. But everyone becomes trapped by the market system.

The closure of local shops and their replacement by out of town shopping centres has the same effect. Successive government policies mean pressure to make these journeys by car. The cost of all forms of public transport has rocketed over the last 25 years. The cost of car use has remained virtually unchanged. Some 93 percent of personal travel is now by car.

Most people, including most car users, want to cut car use. It’s not just that public transport is expensive. Bus use has declined by two thirds since the mid-1950s. The main reason is cuts to services and congestion, which makes bus travel unreliable. In London, for example, overcrowding and traffic jams push people off the buses. Some turn to the car, which in turn creates further congestion.

Incredibly, journeys by car in London take the same time as 100 years ago. This is the crazy logic that comes from abandoning any attempt to rationally plan transport and wider resources. Households now spend 70 percent more of their disposable income on transport than 30 years ago and are more frustrated by travelling. That is one reason why people feel their lives have got worse over the last ten years despite official talk of economic growth and rising prosperity.

New transport plan is a con

THE ANNOUNCEMENT on Monday of a ten-year rescue plan for the railways was a rehash of government plans from two years ago. The ‘extra’ £33.5 billion of public money to be handed out by the Strategic Rail Authority is not new money at all.

All but £4.5 billion of it was already pledged by deputy prime minister John Prescott in his ‘ten-year plan’ before the last general election. A third of the £4.5 billion has already been handed to Railtrack. The rest is what Railtrack bosses said was needed to maintain track over the next five years.

Big business says it will stump up cash for the plan only if it is guaranteed a hefty profit.

SOUTH WEST Trains (SWT) has imposed a derisory pay offer on rail workers. Cleaners on about £5 an hour will be barely £1 a day better off. SWT is owned by transport multinational Stagecoach. The Stagecoach directors who accuse SWT workers of greed include:

National Express has a monopoly of most coach routes between cities. Also owns the ScotRail franchise where it refused a decent pay rise to the second worst paid drivers in Britain.

National Express has nine rail franchises. Eight of those were in the top ten companies with the highest fare increases last year. Profits rose 45 percent in the first six months of last year, with a 13 percent increase in payouts to shareholders. One of its franchises, c2c, operating from London to Southend, defied safety experts and passengers by scrapping guards on its trains last year.

Stagecoach makes £4 million a week. Multimillionaire boss Brian Souter raked in a fortune from scandals surrounding rail privatisation. Owns South West Trains (SWT), where workers were forced to strike over pay and in defence of their right to organise a union earlier this month. SWT makes over £1 million a week.

Stagecoach also has a 49 percent stake in the infamous West Coast London to Glasgow franchise operated by Richard Branson’s Virgin.

Richard Branson’s Virgin Trains has become a byword for chaos. That has not stopped it consistently raising fares. It is blaming action by low paid workers for current delays.

Virgin was responsible for the longest delays anywhere on the network over Christmas, on days when none of its staff were taking industrial action.

How it could be different

There are immediate measures that can ease the transport crisis. Renationalising the rail and bus industries is the first. Seizing the profits and personal wealth of the big businessmen who have gained from the sell-offs is the second.

That would end some of the worst aspects of the transport crisis straight away and would open the way for a massive investment programme. There are too few buses in cities and in rural areas. Yet workers in car factories fear redundancy.

Any rational system would put their skills and those factories to use building buses and trams. The government boasts of an ‘Integrated Transport Strategy’. That is impossible without planning involving passengers and workers. Nor can dependence on the car be cut by market forces, except by squeezing workers who have cars.

All the research shows that charging for car use hits poorer car owners. Car use must be cut, for everybody’s sake. The way to do that fairly is to ration it according to people’s needs. Most of the poorest fifth of households in Britain do not have access to a car. They include people most in need of door to door transport-pensioners and the disabled.

But ending the transport chaos means reversing the wider policies that mean there is no overall planning of housing, jobs and education. Re-establishing comprehensive education and smaller local schools would cut down on car journeys as well as improve learning and quality of life. Integrating affordable good quality housing with the creation of local decently paid jobs would also reduce the time spent travelling.

Some 80 percent of food is sold through just four supermarket chains. Forcing them to meet local needs would ease the pressure on people to drive to out of town complexes. This means taking central control of key resources and using that to suit people rather than forcing people to bend their lives to meet the drive for profit. Any moves towards that mean breaking with the priorities of big business. Instead New Labour talks of greater flexible working-more hours spent at the beck and call of employers and travelling to drop children at childminders.

Is manufacturing industry finished in Britain? 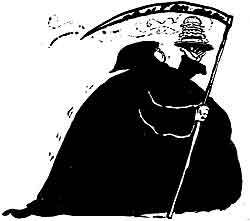