Swept away by drive for profits

This article is over 19 years, 5 months old
FLOODS, FAMINES, hurricanes - such wild and unpredictable weather patterns seem to have got more common over the last few decades. And there is a growing body of evidence that points to the increasing impact of greenhouse gas emissions and pollution as the cause. The latest report of the way capitalist society threatens people and the planet we live on came this week from a team of scientists working for the United Nations.
By Paul McGarr
Downloading PDF. Please wait...
Saturday 17 August 2002

FLOODS, FAMINES, hurricanes – such wild and unpredictable weather patterns seem to have got more common over the last few decades. And there is a growing body of evidence that points to the increasing impact of greenhouse gas emissions and pollution as the cause. The latest report of the way capitalist society threatens people and the planet we live on came this week from a team of scientists working for the United Nations.

They identified the ‘Asian brown cloud’, a haze of man-made pollutants, ten million square miles across and two miles thick, high in the atmosphere above the Asian continent. The team of international climatologists behind the report was led by Professor Paul Gruntzen.

He was awarded a Nobel Prize in 1995 for his work on the hole in the ozone layer above the polar icecaps. This is caused by the release of chemicals called CFCs from aerosols, fridges and industry. When scientists of this calibre warn of the impact of the pollution hanging over Asia everyone should take them seriously. The cloud is made up of what the report calls a ‘dynamic soup’. It is made from pollution and particles from cars, industry, and ash and soot from the burning of forests and from the wood used for cooking.

To this noxious mix are added greenhouse gases, such as carbon dioxide, from many of the same sources. The resulting chemical haze, say the scientists, cuts sunlight reaching the earth’s surface by up to 15 percent. It also traps heat in the lower atmosphere, so raising temperatures there.

The result is to change weather patterns in unpredictable ways. The scientists estimate that the haze could cut India’s winter rice harvest by up to 10 percent, threatening millions of people.

Some 13 states in India have recorded the worst drought in memory this year. Elsewhere in India floods and resulting landslides had killed scores of people by the start of this week. Northern China has seen its most severe drought and its highest temperatures for 50 years, threatening to ruin vast areas of crops. Yet elsewhere in China over 800 people have already died in severe floods. The same pattern of extremes has been repeated across much of Asia.

Cambodia is seeing its worst drought in 20 years, hitting vital rice production. In Vietnam over one million people face severe water shortages as parts of the country have their worst drought for almost 30 years, while in the country’s Mekong river delta floods are threatening disaster.

The scientists say the haze is behind a big rise in respiratory disease in Asia and could cause ‘several hundreds of thousands’ of premature deaths. The impact of climate change is not confined to Asia. The ‘brown cloud’ is high in the atmosphere, and under the right conditions can quickly spread around the globe.

That year saw weather chaos linked to El Nino, a cyclical change of the currents in the Pacific Ocean that disrupts rain patterns. Now scientists say that a new El Nino is already under way, which could add to the chaos and instability.

ALMOST ALL scientists and governments accept that the threat of unstable and extreme weather is fuelled by pollution and global warming, itself caused by the emission of greenhouse gases like carbon dioxide. According to UN scientist Dr Klaus Toepfer, the key causes of such pollution include ‘dramatic increases in the burning of fossil fuels in vehicles, industries and power stations, and emissions from millions of inefficient cookers’.

By far the biggest culprit for greenhouse gas emissions is the US, which accounts for 25 percent of all the world’s carbon dioxide emissions. Europe accounts for another 20 percent. Press coverage acknowledges that a key cause of the ‘Asian brown cloud’ is growing car use in the sprawling Asian cities. The giant car and oil and other corporations want to expand their profits by selling ever more cars, tyres and petrol, as well profiting from linked road building programmes.

Companies like BP, Ford and General Motors drool over the ‘market potential’ in countries like India and China. Instead of planning clean, cheap public transport, these companies and the governments which back them want to inflict the kind of traffic and pollution chaos cities in Europe and the US already have.

Only they want to do it in even bigger cities where they can ensure even less regulation on pollution and environmental standards than exist in Europe and the US.

The press have also focused on the role of burning of forests and on the use of wood stoves for cooking in Asian countries. Forest burning is linked to the intensive drive by big logging and mining companies to exploit the world’s resources, and to the poverty that drives people to clear forests to obtain land.

Poverty is also the key cause behind the use of wood-burning stoves for cooking, as people have no access to cleaner alternatives. The solution to these problems is simple and obvious – to curb the activities of the giant corporations which are plundering the world’s resources, and to lift people out of poverty.

CURBING GLOBAL warming and pollution, stopping the plundering of the world’s resources and tackling poverty should be the agenda at the World Summit on Sustainable Development, due to start in Johannesburg in South Africa later this month.

But there will be no international agreements from Johannesburg. The real agenda will be dominated by what summit organisers have dubbed ‘type two partnerships’. These are simple for anyone in Britain to understand. They amount to the embrace, on a global scale, of the kind of Private Finance Initiative and Public-Private Partnership schemes pushed by New Labour across public services.

The Christian Aid charity has denounced the summit, saying, ‘Business has greater access and influence than any other groups and we are concerned that the agenda is being unduly skewed towards the wishlist of companies.’ Britain’s New Labour government is at the centre of the privatisation drive going on at Johannesburg.

Tony Blair has invited bosses of giant companies – many of which have terrible environmental records – to join the delegation. Bill Alexander, chief executive of Thames Water, and Sir Robert Wilson, executive chairman of mining company Rio Tinto, are delegates. Thames Water has been prosecuted in Britain by the Environment Agency for pollution on more than 20 occasions in the last eight years.

Rio Tinto, the world’s largest mining company, plans to mine uranium in one of the world’s most fragile natural areas, Australia’s Kakadu National Park. Friends of the Earth says that Britain’s delegation ‘is further evidence that Blair is determined to cosy up to big business at whatever cost’. The summit is a PR exercise to dress the neo-liberal drive up in green-tinged and anti-poverty clothing. 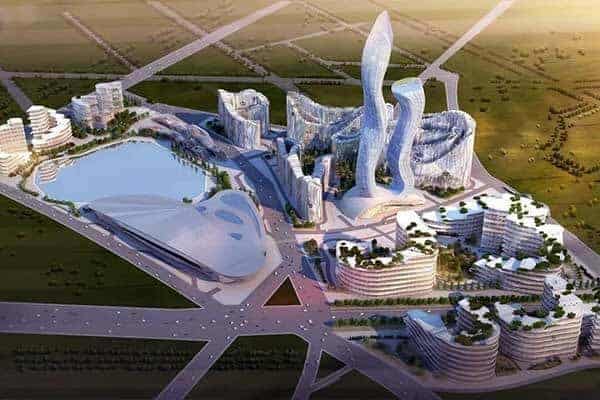 Mad system that drives us into economic chaos