Syria: the struggle within the revolution

This article is over 8 years, 9 months old
The Syrian revolution is portrayed as degenerating into anarchy and sectarianism, now at the mercy of outside powers. But Simon Assaf interviewed revolutionaries taking part in the committees determined to take control of their own lives in the midst of the fighting
By Simon Assaf
Downloading PDF. Please wait...
Tuesday 23 April 2013

Syrians jealously guard the independence of their movement, and the local councils and revolutionary committees that emerged out of the popular uprising.

In the first days of the revolution that began in March 2011, activists formed Local Coordinating Committees (LCCs) to organise protests against the regime of Bashar al-Assad.

Thousands of these committees sprung up in neighbourhoods, villages, towns and cities across the country.

The LCCs became an important voice of the revolution. They organised protests and published newspapers. Their aim remains to establish “a civil, pluralistic, and democratic state” and they firmly reject attempts by outside powers to hijack the revolution.

As the regime retreated from large parts of the country the revolutionary committees transformed into local councils known as the Majlis Mahali. Many hope these will still form the basis of a new democratic system.

Some of these councils serve hundreds of thousands of people, others have sprung up in villages with tiny populations. Across the country they represent millions of Syrians.

Abu Walid is from a committee in the capital Damascus, while Raed is from a local council in Idlib, northern Syria. It has become impossible for them to travel so they spoke by Skype to the World Social Forum in Tunisia.

Early in the uprising many towns and cities that rose against the regime took up arms. They were joined by mutinous soldiers to form “free army brigades” (FSA). These make up the vast majority of the armed uprising.

Raed explained, “As soon as the FSA liberated Idlib, we transformed the revolution committees into local councils and assumed the responsibilities of the state.

“Our main task is to meet the needs of the people, but we are also part of the revolution, and work in support of the rebellion.”

Many of the brigades, which were set up to defend neighbourhoods, have good relations with the local councils. But there are problems.

Raed said that in liberated areas, “Our responsibilities extend to dealing with the armed rebels as sometimes they meddle in civilian affairs. These negotiations do not always go smoothly.”

The councils are gradually extending their control over courts and prisons—and they have been joined by judges and lawyers who defected from the regime.

In the town of Manbij, northern Syria, large numbers of police abandoned the regime and began taking orders from the revolutionary committee.

In the town of Saraqeb civil servants reopened ministry buildings, now under the control of a council that has to be re-elected every three months.

The councils are stepping in as an attempt to coordinate the many currents inside the revolution—secular, nationalist, leftists, traditional Muslim organisations and some jihadist militias.

These groups are in broad agreement over a future democratic state.

However, Islamist groups that have a different vision for Syria have also grown in popularity.

They want an “Islamic state” without democracy, and have refused to accept the elected councils. This has led to tensions inside the revolution.

Despite this, many see the Islamists as allies. They are known as fearless fighters, rooted in the revolution, that are willing to defend the people. Some of those who are drawn to the Islamist brigades are attracted because they are well-organised and effective.

But many who are recruited insist they are not fighting for a new dictatorship and accept that once the regime is defeated political differences will become more pronounced.

The tensions are already finding expression.

One Islamist brigade ran into trouble recently when it attempted to impose its will on locals and other rebel brigades following the liberation of Raqqa, a city in eastern Syria.

But in other regions Islamists work alongside other currents. And all fear that as the country slides deeper into the misery of war, Syria will be at the mercy of outside powers.

The West and other powers in the region are using the promise of money in an attempt to marginalise or control the councils.

Abu Walid said, “Our biggest problem is that as the regime still controls the central bank. We are not receiving any financial support and are finding it difficult to maintain basic services. This has led to a severe financial crisis for many of the councils.”

He said that very little of the much-vaunted “foreign aid” is reaching them. “We are very isolated from the outside world. Nothing is reaching us.”

The problems are compounded by regime airstrikes and long-range artillery that regularly target the liberated areas.

Abu Walid was candid about the problems, “Our major difficulty is that the regime has destroyed crucial infrastructure such as factories, power stations, bakeries and hospitals. In the areas under siege we also have to manage huge shortages of basic necessities such as fresh vegetables and bread.”

Another problem is emerging from within the revolution.

Raed said, “When some foreign organisations wanted to lend support to the liberated areas they channeled the funds through individuals and groups to bypass the councils.”

“The opposition Syrian National Coalition wants to appoint its own councils and channel funds through ‘selected representatives’.

“The Coalition has declared itself to be the ‘transitional government’. But it does not represent the people, and has not been chosen by the people.”

Abu Walid warned “that some councils have been imposed on the population, usually under the patronage of an influential member of the opposition—sometimes by coercion, but often with cash. These councils are not under popular control.”

Raed stressed that despite these problems, “the majority of the councils have roots in the local population, are elected and represent the popular revolution.

“We have many difficulties, but we are making a revolution against a regime that has been in power for 40 years.

Our revolution is also against old ideas and old ways of doing things. Day by day we are working to transform Syria.” 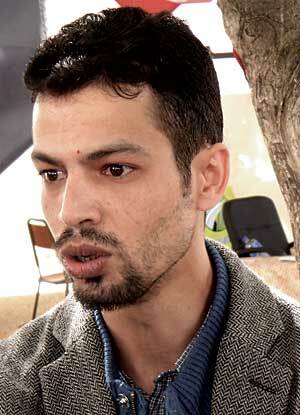 Palestinian revolutionary: 'Assad is no friend of the Palestinians'