This article is over 14 years, 0 months old
In Sicily in the early 1990s a mass movement against the Mafia emerged after the assassination of two magistrates investigating them.
Downloading PDF. Please wait...
Tuesday 22 January 2008

In Sicily in the early 1990s a mass movement against the Mafia emerged after the assassination of two magistrates investigating them.

When the Italian president and other big-wigs came from Rome to the funeral of one of the magistrates thousands of people surrounded Palermo cathedral chanting “the Mafia out of the cathedral”, meaning the politicians. The highest representatives of the Italian state had to be bundled away.

This movement did not go far and fast enough. It succeeded in getting an anti-Mafia mayor of Palermo elected who did good in some ways but was not prepared to take on the system of power.

Today “the Anti-Mafia movement” often holds conferences in five star hotels and publishes reports that no one reads – although educational campaigns in schools have done some good.

The head of the Sicilian region, Salvatore Cuffaro, visited Corleone (the Sicilian town featured in “The Godfather”) last April to unveil a street name marking the capture a year earlier of the Mafia boss, Bernardo Provenzano.

Cuffaro had to skip the anti-Mafia discussion scheduled for the afternoon, as some of the investigating magistrates due to speak are trying to prosecute him for collusion with the Mafia.

He was found guilty last week of having dealings with the Mafia and was sentenced to five years’ suspended pending appeal.

The one element that is new is a campaign by a group of young people to stop shopkeepers paying protection money. Currently about 80 percent do.

Today’s Mafia has adapted very quickly to a deregulated neoliberal world. In Puglia organised crime grew in response to the civil war in Yugoslavia, trading arms for drugs or transporting people out of the war zone.

The big earners now are waste disposal and private health. Employers in the north of the Italy, and in other countries, who want to dispose of hazardous waste can do so at a fraction of the cost by paying the Camorra, the Mafia’s equivalent in Naples, who will dump it in the region round the city.

There we are seeing a rise in cancer and illness because the water table and the food chain are being corrupted by mass dumping of hazardous waste.

This is one of the reasons behind the current protests over waste disposal in Naples.

In Sicily the Mafia has moved in on the health service after the state has farmed out healthcare to private providers.

The Villa Santa Teresa was turned into one of Europe’s top cancer clinics by the Mafia.

Michele Aiello, the manager, was already the richest man in Sicily in 2000 according to tax returns, and during 2001-02 he received more than £50 million in public money.

Over 500 jobs were created in an area of chronic unemployment, with Aiello reportedly providing jobs for dozens of relatives of top policemen.

Such a clinic could be used to recycle dirty money but it’s a good investment as it’s a source of regular state funding.

Politicians set the prices private providers can charge – the same politicians who are linked to the Mafia. Subsequent investigations have shown these clinics were charging 40-45 percent above standard rates.

Nowadays many of the top Mafiosi being arrested are both top consultants in Palermo’s hospitals and leaders of Mafia gangs. The Mafia is transforming into a more entrepreneurial organisation. 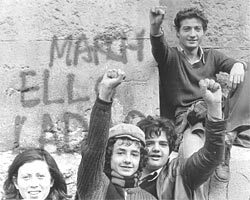 How capitalism created the Mafia