Ten years since the Zapatista uprising

This article is over 18 years, 7 months old
ON 1 January 1994 the presidents of Canada, Mexico and the US called a press conference to announce the creation of the North American Free Trade Association (NAFTA).
By Mike Gonzalez
Downloading PDF. Please wait...
Saturday 17 January 2004

ON 1 January 1994 the presidents of Canada, Mexico and the US called a press conference to announce the creation of the North American Free Trade Association (NAFTA).

This was to be the first step in the march towards a single, global capitalist economy, effectively merging the three economies into one.

The following day, however, instead of their pictures the world’s newspapers carried photographs of armed indigenous Mexicans. They were wearing balaclavas, simple woven blankets and open sandals-a dramatic contrast to the set of Armani suits on display at the well managed press gathering.

The Zapatista National Liberation Army (EZLN) of Chiapas had announced its arrival on the world stage.

Chiapas, the southern state of Mexico bordering on Guatemala, was among the poorest places in Latin America. In 1990, 50 percent of the population of the state were malnourished, 42 percent had no access to clean water, 33 percent were without electricity and 62 percent did not complete their primary education.

In preparation for Mexico’s integration into NAFTA, the then Mexican president, Salinas, announced a massive privatisation plan in 1990. It was not only publicly-owned assets that were now for sale but also the land owned by the rural communities. This was a right won over decades of agrarian struggles.

The communities in the highland regions of Chiapas had been driven off their lands several times already.

As the cattle farms of Chiapas expanded to feed the multinational hamburger chains, the indigenous communities were driven deeper into the area called the Lacandon Forest.

But there was no protection from the authorities. The governor of Chiapas in 1990, for example, was one of the biggest ranchers in the state. At their press conference the three presidents celebrated the benefits that globalisation would bring. But in Chiapas it was the last straw.

On the very day that NAFTA was proclaimed, the Zapatista rising tore off its mask and exposed to the world the reality of globalisation. It might promise six new varieties of bottled water, but it would deprive millions of any clean water at all. It would concentrate food production into fewer and fewer hands, and in Chiapas more children would go hungry.

The Lacandon region was overwhelmingly indigenous. Over 30 Indian languages were spoken between them, from Tojolóbal to K’iché. They had fought for decades to defend their communities. Now they joined together to form the EZLN, named after the greatest of Mexico’s peasant revolutionaries, Emiliano Zapata.

Its leading members included a small number of non-Indians, socialists who arrived in the area after the repression of a mass movement of students and workers in 1968. One of them was the man known everywhere today as Subcomandante Marcos, or “El Sup”.

The January rising lasted just a few days, during which the Zapatistas occupied the state capital, San Cristóbal de las Casas, and several other towns.

They demanded land reform and Indian rights and democracy, both political and economic. The government could not turn this time to its usual response of terrorising the population.

For the first time ever, the world was watching Chiapas.

In their first declarations from Lacandon, the Zapatistas asked a very simple question-why are we so poor when the world economy is so wealthy?

An easy response might have been that these were people who in some way had been left behind by modernisation, primitive people who were not yet ready to join the great neo-liberal banquet.

The misery of these communities was not about isolation or backwardness, of course. Chiapas was already part of the modern world. The Zapatista fighters spoke ancient languages and dressed in simple clothes.

But it was the multinational corporations who had taken their land, driven down the price of maize and taken ownership of their water. That was perfectly illustrated by a paradox that fascinated intellectuals and media types across the world.

While the Mexican army quickly moved to encircle the Zapatista communities, Subcomandante Marcos, always represented only as the spokesperson for the CCNI, the indigenous people’s Coordinating Committee, communicated with the world across the internet.

From a state under siege he sent out his critique of neo-liberalism, and the indigenous nations’ version of Latin America’s history. This was the true face of globalisation. The Zapatistas represented the victims of capitalist modernisation. And they were fighting back!

They continued for years in a kind of endless stalemate while slowly the siege tightened around the Zapatistas.

Millions of Mexican workers were living with the growing poverty, rising unemployment and the destruction of social facilities that privatisation brought. All of them now looked towards the EZLN for a lead, a direction to follow.

Yet all that came back was a call for support for the demands of the communities of Chiapas.

The Zapatistas had come to symbolise the growing resistance to globalisation but they chose not to lead it. Instead they supported a left candidate in the presidential elections of that year, Cuauhtémoc Cárdenas, but failed to see that he was simply using them for electoral advantage and would never join their cause.

Perhaps the defining moment was in August 1994, when 6,000 representatives of Mexico’s social movements gathered in a specially built grass stadium in Lacandon.

It was an extraordinary gathering. Yet its emphasis on the autonomy of the communities and their specific demands gave no lead to the millions of supporters in the urban centres of the country.

There can be no denying, however, that outside Mexico the Zapatista rising had fired the imagination of a new generation coming face to face with the brutal realities of globalisation.

The Zapatistas had demonstrated that even the most oppressed and exploited could and would fight back. And Marcos’s manifestos and lyrical essays suggested a new kind of politics too.

These mainly young protesters were deeply distrustful of what they saw as old and discredited political methods which now lay buried under the rubble of the Berlin Wall.

Inside Mexico, Marcos continued to negotiate with the capitalist state. He argued that you could “take power without taking power”-shape events by the power of persuasion and solidarity. It was a seductive message, and it found echoes and supporters all over the world.

In Seattle in 1999, when the anti-capitalist movement announced its birth, many of the marchers carried placards supporting the Zapatistas and wore the red bandannas of Chiapas.

The impulse behind that expression was beautiful. It was internationalist, it identified with the struggles of the oppressed, it offered solidarity and common purpose, and it identified the enemy common to us all-global capitalism. And it celebrated the commitment to community, to a genuine democracy of equals, that was at the heart of Marcos’s philosophy.

Ten years have passed. The Zapatistas can rightly claim to have helped to set in motion a vast global movement against neo-liberalism.

Yet the communities of Chiapas remain under siege two presidencies after they first announced their rebellion. Every day there is a new assault and the circle tightens around them. Eight years after they made their first demands, the Mexican Congress agreed to enshrine Indian rights in the constitution, yet nothing has changed.

In the end, the language of rights and laws can only bring changes when, and if, those who control the state agree to implement them.

Ten years after the Zapatistas’ rising, an infinitely more dangerous world is governed by forces which make not the slightest attempt to justify their actions morally or legally.

The states they preside over are weapons in their hands, not neutral instruments for the administration of justice.

The point now is to replace them with a different, genuinely democratic society, which will continue and complete the unfinished Zapatista revolution.

Death on the US-Mexico border

'They asked if my uncle was Osama Bin Laden' 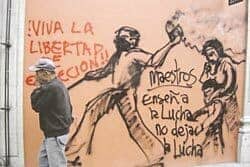