A mass death in Texas and a massacre in Melilla are yet more examples of the death dealt out by border controls
Downloading PDF. Please wait...
Sunday 03 July 2022

It’s been a horrifying week of migrant deaths across the globe. In Texas in the US, more than 50 people suffocated in the back of a trailer, while in Melilla, north Africa, Spanish and Moroccan cops beat people to death. And in Britain, too, new racist policies lay the groundwork for yet more horrors. They’re just some examples of borders that kill then and now

Texas—left to die in the desert

Carla and Griselda Carac Tambriz were two sisters hoping to build a better life in the US. But their lives were tragically cut by brutal border controls.

The Tambriz sisters were two of at least 51 people that died in sweltering heat in the back of a trailer in southwest San Antonio, Texas, last Sunday.

Their deaths weren’t inevitable. They were a result of border controls that have left migrants with no other option than to take increasingly dangerous routes to get into the US.

And it’s far from the first time those border controls have killed. In a Walmart car park, also in San Antonio, the bodies of eight people were found in the back of a trailer in June of 2017. Another two people were taken to hospital where they later died.

And in May of 2003 eighteen migrants died of asphyxiation, dehydration and heat-related conditions in the back of a trailer that had travelled from Mexico.

The harsh dry landscape of South Texas has, in particular, become a death zone for those crossing by foot or in the back of a trailer or van. In fact more migrants die there than anywhere else in the US.

Without safe routes to the US, migrants who choose to cross the border on foot are forced to trek miles across lands under Border Control jurisdiction.

While making their way across ranch land, they are exposed to extreme heat and extreme cold at night. Other risks include dehydration and attacks from wild animals. All can prove deadly.

The US border patrol itself counted 3,253 migrant deaths in South Texas between 1998 and 2020. The real figure is likely to be much higher because the remains of migrants are often not found for years. The bodies of many more are never discovered.

This leaves families of missing migrants desperately looking for answers to what happened to their loved ones. But in most counties in Texas, the system isn’t set up to help families get the necessary closure.

A high volume of deaths, and a lack of resources to process them, has led to the bodies of migrants being buried without DNA being taken or proper analysis done. Bodies are often buried without any documentation of location, making it impossible for families to find their loved ones’ remains. So even in death the US state disregards migrants and their families.

The death of migrants who travel through Texas at the border is the direct result of there being no safe routes for them to enter the US. They result from the public health order known as Title 42, first imposed by Donald Trump and kept by current president Joe Biden.

The order allows officials to send migrants back to Mexico without giving them the chance to claim asylum. This leads to migrants desperately and repeatedly trying to cross the border.

And even as the bodies pile up, the US shows no sign of easing its border controls. That’s despite the fact that vast sections of US industry depends on migrant labour.

But the US’s ruling class—and ruling classes around the globe—find borders useful in other ways. First, it allows them to create a sense of national belonging that they hope will undermine class consciousness. 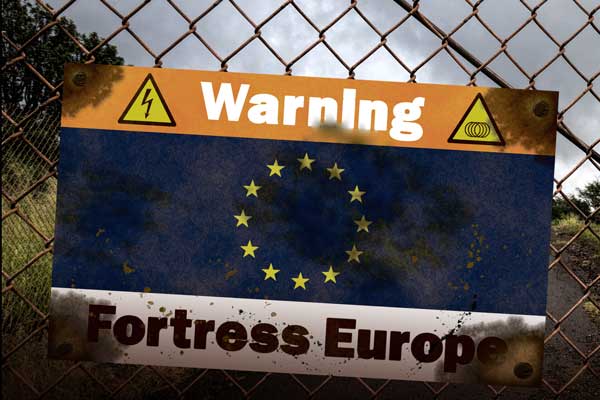 Belarus-Poland: one example of borders that kill
Read More
Second, nationalism helps them sow divisions among workers of different backgrounds living in the same country. Third, having a pool of workers that are not considered to be citizens is very useful to the bosses. Undocumented workers can be paid less and are often scared to demand their rights.

Last, our rulers are only too happy to have a group that it can scapegoat for its own failings. Low pay, a lack of housing, jobs and benefits can be blamed on the most vulnerable.

For all those reasons, the US government—from behind crocodile tears—will defend and fortify its killer borders.

Last week Biden described the deaths in San Antonio last Sunday as “horrifying and heartbreaking.” But his policies—and the policies of presidents before him, both Democrat and Republican—are the to blame for the deaths.

It’s now called Morocco’s “Black Friday”. On 24 June Spanish and Moroccan cops combined to suffocate, trample and beat to death 37 migrants trying to cross into the Spanish possession of Melilla in north Africa.

The police of both countries assaulted and killed people and then worked together to smash them back across the border.

Melilla and the nearby city of Ceuta are toxic reminders of Western imperialism in Africa. The Spanish state grabbed Melilla in the 15th century and has held it ever since.

It was the jumping-off points for the fascist officers’ military coup—led by general Francisco Franco—against the Popular Front government in 1936. Even after the independence of Morocco in 1956 the Spanish ruling class kept a foothold in Africa to bolster its control.

They won the territories by blood and occupation. They maintain the borders today by brutal methods to repel migrants hoping to access the freedom promised by the European Union (EU).

Imperialism defends its “right” to conquered territory but murders Africans who seek simply to live in the countries that have seized their lands.  Every Spanish government—including the present one of the Labour-type PSOE and Podemos—has held on to these territories.

As the EU dismantled internal border controls in the 1980s and 1990s, the external barriers of Fortress Europe became correspondingly harsher. In Melilla that meant the construction of a fence all along the 7.5 mile border with Morocco.

Virtually every day people are cut by wire, attacked by police or injured in falls from the fences as they try to cross. And there are deaths, many of them unknown and unmarked.

In 2005 at least 13 people died at the hands of Moroccan and Spanish police. And in February 2014 another 15 people drowned on Ceuta’s Tarajal Beach when Spanish police used anti-riot equipment against them.

But the entry to the EU at Melilla is seen as safer than the risk of drowning during a boat crossing of the Mediterranean Sea.

As migrants died on the border recently, the EU was holding an event in the city of Nador, six miles from Melilla. The EU’s “intercultural expo Africa 2022” celebrated the creation of an “inclusive society for all” and paraded some refugees it claimed to have helped.

Protests across Spain after massacre of migrants in Melilla
Read More
Nador’s branch of the Moroccan Association for Human Rights told Socialist Worker, “No migrants who are desperately trying to survive on the border participated in the activity, which lasted for six days. The organisers brought in groups from other cities to dance and sing. Reality and truth came out even if EU money wants to strangle it.”

But there is also resistance. Most importantly, Africans plan and act to break through the border and defend themselves. They refuse to abandon their own agency to confront the border regime.

Jesus Melillero, a socialist in Melilla, said, “While Spain’s prime minister Pedro Sanchez reaffirms his support for the use of force by the Spanish and Moroccan police against refugees, the movements in Melilla called a united mobilisation to denounce the racist policies of the EU.”

Driving the Spanish out of Africa and forcing open the EU to all would be partial justice for the massacre on the border.

In Britain, the Nationality and Borders bill that criminalises “illegal” refugees and facilitates easier detention and deportation, came into force last week. It also put the military in charge of monitoring the Channel.

That’s on top of the plan to send migrants who come to Britain without official documentation on a “one way ticket” to Rwanda. It means deportation for refugees fleeing war, poverty and persecution, who endure an arduous journey to the French coast and risk a deadly trip across the Channel.

The Rwanda plans ramp up the Tories’ vile attacks to a sickening level. Once their asylum application is accepted, refugees are stuck in Rwanda.

The Tories first attempted a deportation flight to Rwanda last month. It was met with protests outside the Home Office, in towns and cities across Britain and at detention centres. After legal injunctions came in with hours to spare, all 37 people were kept off the flight.

It felt like I was going to be executed

Deportations are violent. This is evident from the experiences of those sat on the plane waiting torturously for it to take off from Boscombe Dawn, a military aircraft testing site near Salisbury.

The handful forced to board were restrained with belts and handcuffs. One asylum seeker was so scared he passed out.

“It felt like I was going to be executed,” said another about his journey from Colnbrook removal centre. He arrived in Britain in May after fleeing religious persecution in Iran.

He was kept in a van for hours with a camera watching him. “I was really puzzled. I was thinking, ‘What crime have I committed to be treated like this?’ It was very humiliating.”

One deportee who fled Iraq said he would “rather choose death instead of being taken to Rwanda”. Another 25-year-old Iraqi Kurd was suicidal as he was taken to the airport.

“You can’t compare it to death, death is better,” he said. “I never thought this would happen to me, that they would take me to another country so far away from everything that I know.”

He said his experience of being physically manhandled by guards, threatened with restraint if he moved, reminded him of traffickers.

But the failed flight hasn’t deterred the Tories. They now want to electronically tag people who arrive on Britain’s shores. 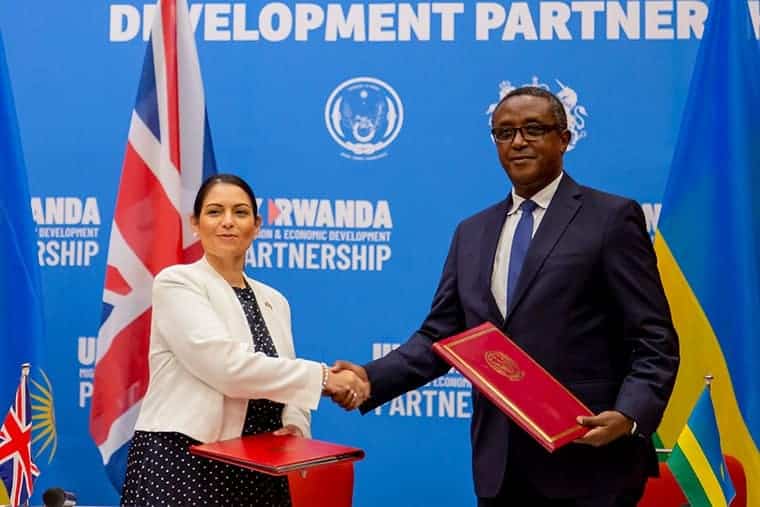 Rwanda — refugees deported to country where dissent is drowned in blood
Read More
And an immigration removal centre that closed four years ago will reopen to facilitate the Rwanda deportation plans. Campsfield House in Oxfordshire will become a 400-bed removal centre for men, despite being shut because of its dire conditions.

Fears are also building that Rwanda will accept child asylum seekers on a one-way ticket. The Hope Hotel in the capital Kigali is building a football pitch and basketball court and collecting toys.

The Tories previously said no unaccompanied children would be set to Rwanda. Downing Street has since admitted it was preparing “facilities for eventualities” and didn’t rule out that children with parents would be deported.

Each Tory attack on refugees’ rights is deadlier than the last.